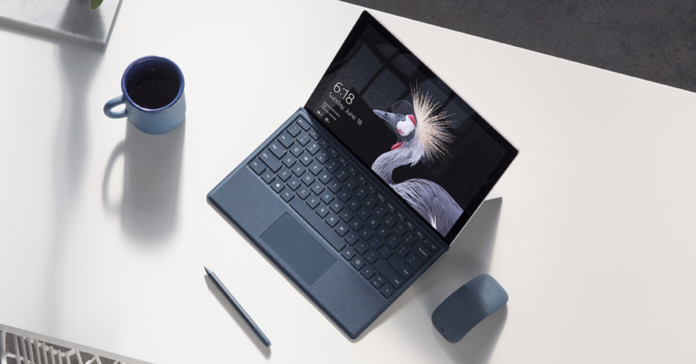 Since 2012, Microsoft has been designing and developing their Surface and Surface Pro line of tablets. They aim to replace your laptop, and for the most part, they’ve gotten better at it. The first two Surface products were a good start, but they didn’t really have a clear intention. There were the Surface Pro and Surface Pro 2, which were powerful 11-inch tablets with laptop specs and ultrabook prices. Then there were the Surface RT and Surface 2, which ran a gimped version of Windows 8 which could only run Windows Store apps. These proved to be a failure, and they soon faded into obscurity.

Both the Surface Pro 3 and Surface Pro 4 felt like “finished” products. They both performed well as laptop replacements, but not so much as standalone tablets. This time, Microsoft has released the updated Surface Pro. As is so common these days, they completely ditched their old naming scheme, and just named it the “New Surface Pro”. Let’s see how it compares.

The New Surface Pro is largely the same as it’s predecessor, the Surface Pro 4. It has the same body shape, and the same screen aspect ratio. Unless you put them side by side, I don’t think the average person would be able to tell the difference. There are subtle changes which Microsoft have made, including ‘softening’ all the sharp edges of the device. That’s one of the things I noted in my Surface Pro 4 review, where I complained the sharpness of the device made it uncomfortable to use on my lap (you know, like a laptop which it’s supposed to replace?). Now, the whole body is a bit softer, which makes it more comfortable to use both as a tablet and a laptop.

What is drastically new, however, is the addition of Alcantara felt keyboards. Instead of the normal synthetic fabric, Microsoft has chosen to go down the luxe route by changing the fabric to Alcantara felt. It’s nice, but I’m not sure how it will wear as time goes by. The keys are still plastic, so it’s just as easy to type on as before. In my opinion, the Surface’s line of keyboard covers is some of the best keyboards you can get on any tablet. The typing experience on the new Alcantara felt keyboard is on par with that of the Macbook Air, which is known for its brilliant keyboard.

Though it’s an excellent keyboard cover, it’s still not bundled in with the New Surface Pro. As is tradition, Microsoft makes the keyboard an add-on accessory, and a $159 one at that. Microsoft’s standard keyboard covers are still available for $129, but they don’t feel as nice to rest your palms on.

The New Surface Pro is primarily targeted at businesses which want an All-in-one device which can act like a desktop, and a laptop for employees to take home. This is especially useful for staff members who aren’t as tech-savvy as you’d hope. Since there’s only one device, their files are always there, whether they use it at work or home. Also, having one device for everything lowers the total cost of both laptops and desktops. In order to turn the New Surface Pro into a desktop replacement, Microsoft sells a plethora of different accessories. The most important ones are: Surface Arc Mouse, Surface Pen, Surface Keyboard, Surface Keyboard Cover, and the Surface Dock.

Surface Arc Mouse  The Surface Arc Mouse is a foldable Bluetooth mouse with a touchpad for clicking on. It’s a decent mouse, and it’s almost essential for turning the New Surface Pro into a desktop replacement. At $79.99 it’s a pretty expensive mouse, but it’s got a ton of neat features to justify that price. The best is the fact that it can be folded flat for transportation, and then propped up for use.

The Surface Pro tablets have always come bundled with a Surface Pen. This is no longer the case. Instead, Microsoft has taken it out of the box and put it on a store shelf, for $99.99. It now senses 4096 different pressure levels, up from 1024. It’s actually a good thing Microsoft has removed it from inside the box – the New Surface Pro is $99.99 cheaper than it’s predecessor in almost every configuration. Personally, I didn’t use the Surface Pen too much other than for note taking, so it’s nice to have the choice not to buy it.

The Surface Keyboard is a Bluetooth keyboard designed for desktop use with the New Surface Pro. It closely resembles the Magic Keyboard With Numerical Keypad by Apple, and that’s definitely not a bad thing. It feels good to type on and looks great in any setup. Since it’s Bluetooth, it also looks clean, without any wires. However, it also means that you’ll have to change the AAA batteries every so often. It’s also $99.99, but it’s a very good keyboard.

Finally, the Surface Pro Dock is the last accessory needed to transform the New Surface Pro into a fully fledged desktop machine (except for the display, which Microsoft doesn’t sell). It’s rather incredible what can go through it, since it only connects to the small charging connector on the side of the New Surface Pro. The list of ports is as follows:

This massive expansion in ports comes in at a hefty price though, at a whopping $199.99. Add all the accessories mentioned before, and you’re looking at a rather grand price of $549.95. Just for accessories.

The Surface Pro 4 comes in a multitude of different configurations, and these are the defaults:

I’d recommend going for a minimum of the 256GB, i5, 8GB version if you’re planning to use the New Surface Pro as your main computer. Although it’s quite a bit more expensive than the 128GB, i5, 4GB version, the extra storage and RAM are definitely worth it.

When the Surface Pro 4 was announced, the coolest new thing was that the m3 version was completely silent. Without a fan, there was no audible noise coming out of the Surface Pro 4. Now, even the i5 version of the New Surface Pro has no fan at all. While many may think this is a good thing, I think it’s awful. Without a fan, the i5 processor won’t be able to sustain peak performance for long, severely hampering gaming and video editing performance. Thankfully, the more powerful i7 version retains the fan, but it means if you need sustained performance, you’ll need to chalk up the cash for the i7 version.

In this section, I’ll be basing the review for performance on the $1,299 version. It’s what I’d recommend as the minimum, if you’re going to use the New Surface Pro as your only computer. As a work/study laptop, the Surface Pro glides through tasks quickly and efficiently. This should come as no surprise, as the i5 chip in the New Surface Pro is the latest and greatest – Kaby Lake. Although it’s only has a 15W TDP, it can still perform some pretty demanding tasks well, such as gaming. Although the New Surface Pro wasn’t built for gaming, you can still play some casual games on it without a hitch. The limiting factor here is the complete lack of apps and games on the Windows Store. It’s set to improve, but it’s got a long way to go before it can hold a candle to iOS’s App Store.

Is it a tablet replacement?

Sort of. It’s not really that great of a tablet. Although it’s slimmer and sleeker than it’s predecessor, it doesn’t have enough apps available, and the 12.3” form factor is simply too big. This, combined with the fact that it’s an awkward 16:10 aspect ratio means that you’re left with a very cumbersome tablet. True, it can be useful as a tablet for media consumption, thanks to it’s kickstand, but it falls flat in touch-friendly apps and games. It can’t replace your iPad, and sadly, with the amount of support it gets from developers, it probably never will. As a tablet, the New Surface Pro excels in the note-taking department, as the inbuilt pen is perfect for sketching out notes or plans. Other than that, there isn’t too much use for the New Surface Pro as a tablet.

Is it a laptop replacement?

Yes. It’s also one of the best laptops you can buy today, save for the fact that it isn’t actually a laptop. The only thing stopping it from being the perfect laptop replacement is that it still feels a little flimsy when being used on your lap, due to the lack of any resistance on the hinge. Other than that, it’s a very very good laptop, and I’d recommend it as a premium option for anyone looking for a beautifully designed laptop/tablet.

Is it desktop replacement?

With all the expensive accessories, yes. Though it’s underpowered as a desktop, many won’t even use the extra processing power present on a real desktop. Simple users like me will be able to get by fine with just a Surface Pro, though those who want to edit video or play games may want to look elsewhere.

The New Surface Pro definitely isn’t cheap. It’s a premium product, and it shows through in it’s design, performance, and it’s price. Although it’s a 3-in-1 device, it only does the laptop part exceptionally well, with the tablet and desktop modes being alter-egos. If you plan on using this as your only device and buy an upgraded model, it’s not bad value for money. However, as a laptop alone, it isn’t as economical as something like a Xiaomi Notebook Air.

The New Surface Pro is a refinement of the Surface Pro 4. It features better battery life, faster (fanless) processors, and a smoother body. It’s a joy to use, and it has the potential to be the only productivity device you use. For now, it doesn’t do so well as a tablet or a desktop, but as a laptop, it’s outstanding. If you’re looking for a superb premium laptop/tablet replacement, look no further.