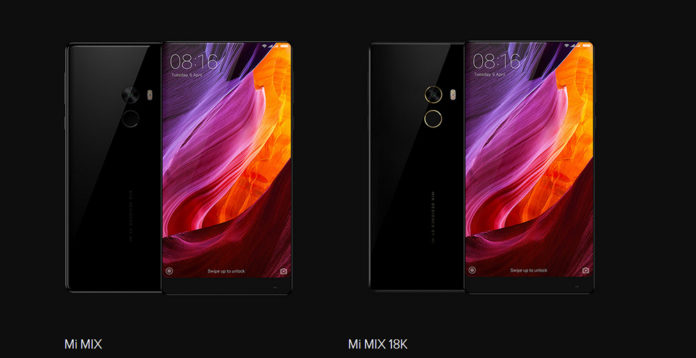 Xiaomi is a company well known for it’s beautiful and yet affordable devices. It has a near-monopoly on mobile phones in China, and withe the Mi Mix, Xiaomi is hoping to grasp more of the luxury phone market. The Xiaomi Mi Mix is marketed as a concept phone, but it does seem fully baked. Instead of the usual layout, the Mi Mix does away with the top and side bezels, leaving just screen to cover it all. It’s a bold and adventurous move, and something not even the Samsung Galaxy S8 can boast. In this review, we’ll find out if the Xiaomi Mi Mix is the future, or just a gimmick.

The first thing you’ll notice about the Xiaomi Mi Mix is just how huge the screen is. It’s a large phone, but the screen is absolutely monstrous. The screen is a whopping 6.4 inches diagonally, even bigger than the screen of the Samsung Galaxy S8+. It covers almost the entire front of the Xiaomi Mi Mix, save for the bottom, which is kept blank for the front facing camera and proximity sensor. The entire phone is incredibly square, and the display itself has a rather unorthodox 17:9 aspect ratio. It’s actually very good looking, and the design aesthetic reminds me of the technology products designed by Porsche.

On the back are the fingerprint scanner, LED flash, and the excellent 16MP PDAF camera. Oddly, the fingerprint scanner and the camera are placed very near each other, and have nearly the same size, so it can get confusing when trying to unlock the phone. The entire back of the phone is made of ceramic. In person, it’s very shiny, and almost looks like glass. Like I mentioned before, the phone follows a square shape, and it’s very sleek. However, it isn’t as comfortable or ergonomic to use, as it doesn’t taper at all or conform to your hand shape.

Along the sides are the sleep/wake button, and the volume buttons, both on the right side of the phone. Though I’m used to the iPhone layout of volume on the left and sleep/wake on the right, it’s easy enough to get used to. Overall, the phone is a very good looking phone, and it really does look like ‘tomorrow’s’ phone. It’s futuristic and sexy, and it’ll definitely turn heads when you turn the screen on.

The Xiaomi Mi Mix is now Xiaomi’s flagship phone. At it’s premium price, it comes with some beefy specs. It has a Snapdragon 821 processor, and 4GB of RAM, as well as 128GB of UFS 2.0 SSD storage. Thankfully, the increased battery drain of the massive screen is countered with a rather large 4400mAh battery. That’s a good size, especially when compared with the Samsung Galaxy S8’s paltry 3000mAh. In addition, the phone is equipped with Quick Charge 3.0, which proves to be useful, since the battery is so massive. The phone charges through reversible USB-C which is great, considering it’s supposed to be the phone of the future. As is expected with almost any smartphone today, the phone comes with WiFi, Bluetooth, and NFC.

The Xiaomi Mi Mix has one of the largest screens on any flagship phone today. However, it’s body isn’t extraordinarily massive. It’s a big phone, yes, but it isn’t unwieldily big. The display covers the vast majority of the front, leaving only the bottom bar for the sensors and front facing camera. The display isn’t just large, it’s also very good. It’s a full HD display, which is lower resolution than the the Samsung Galaxy S8’s, but it’s still a detailed screen, at 362ppi. Also, it’s a rather odd aspect ratio, at 2040×1080, 17:9. Since most videos are shot in 16:9, it means you do end up with some black bars on the side on YouTube. There’s an option to disable this by blowing up the picture a bit, but the screen is large enough that even with the black bars it’s still enjoyable to watch.

The Xiaomi Mi Mix’s display is rather bright, reaching 500 nits, the same brightness of the screen on the iPhone 6s. The screen is rounded at the top corner, which is an interesting design decision, as photos and videos won’t be exactly square if you view them fullscreen. Since the screen is edge to edge, a curved screen is necessary for the phone not to have blocky edges.

The Xiaomi Mi Mix is a flagship phone, and with a flagship phone, you’d expect an amazing camera too. The Xiaomi Mi Mix doesn’t disappoint, with a 16MP rear-facing camera, and a 5MP front facing camera. The front facing camera is understandably sub-par, as they shrunk it down in order to keep the bezels small. The back camera is good, and even under low light conditions, it can snap detailed photos. However, where the Xiaomi Mi Mix falls down is in video recording. The actual video quality is good, but the fact that it can’t shoot 1080p video at 60fps is a glaring omission. It can’t even shoot 720p at 60fps, leaving it only with slow-mo at 720p at 120fps. 4k60fps isn’t on the horizon yet, but it’d be nice to have on such an expensive phone.

The Xiaomi Mi Mix runs Android, like most non-iOS smartphones. Like many of the mainstream Android phones, the Xiaomi Mi Mix runs a heavy skin on top of vanilla Android, called MIUI. It takes after iOS, and intention is obvious all throughout the skin. Xiaomi goes as far as not having an app drawer, leaving all of your apps in a grid on the home screen, much like iOS. This simplicity is popular in China, but for many experienced Android users, it is less than ideal.

If you’re not a fan of it, never fear, you can just download Google Now Launcher to bring the experience closer to stock/vanilla Android. MIUI isn’t bad, and it comes with a few useful features not in vanilla android, but I prefer the design of vanilla. Overall, the operating system is good looking and very easy to use, and if you’ve used an iPhone, you’ll feel right at home. The experience is smooth and snappy, and thanks to it’s app drawer-less design, it’s also streamlined.

The Xiaomi Mi Mix a beast of a phone. It has 4 or 6GB of RAM, and 128/256GB of storage. The flagship specs are completed with the powerful Snapdragon 821 SoC, with a CPU running at 2.35Ghz. Both the 6GB of RAM and 256GB are over-the-top, but that’s not a bad thing, considering that the Xiaomi Mi Mix still costs less than the entry level iPhone 7. The iPhone 7, by comparison, has 2GB of RAM and 32GB of storage. Unfortunately, there isn’t any support for micro SD cards, but with 256GB, it’s not like you’re going to run out storage.

Performance on both the 4GB and 6GB RAM phones is flawless, with the phones flying through day to day tasks, gaming, and benchmarks. There isn’t anything to complain about in this compartment, and with these specs, you wouldn’t expect to. The incredibly fast speeds are also helped by the fact that the screen is comparatively lower resolution than phones like the Samsung Galaxy S8, so there are less pixels for the GPU to push. Aside from the Snapdragon 835 in the Samsung Galaxy S8, the 821 chip in the Xiaomi Mi Mix is on the very bleeding edge of smartphone technology.

Although the Xiaomi Mi Mix is a concept phone ready for the future, it still retains the “legacy” headphone jack, which is being increasingly dropped on many flagship phones. It’s nice that they haven’t had to drop support for a legacy port to stay on the bleeding edge. The inclusion of a headphone jack means you can use the excellent Xiaomi HD Pro IEMs and Xiaomi Headphones.

The Xiaomi Mi Mix comes in two exceptionally capable flavors. A plain black or white Xiaomi Mi Mix comes with 128GB of storage, and 4GB of RAM. If you’re willing to spend extra, you can get the Xiaomi Mi Mix 18K, which packs a massive 256GB of storage and 6GB of RAM. It also adds a bit of aesthetic flair, with 18K gold trimmings all around the phone. Both of these options will suffice for any regular user, and 256GB of storage in a phone is frankly ridiculous. It’s the same amount of storage as my MacBook Pro, and I barely use 128GB of that. 6GB of RAM on an Android phone is unnecessary right now, but if you’re looking to future-proof your phone, it’s not a bad option.

The Xiaomi Mi Mix is the phone of the future. With a near bezel-less display and incredible internal specs, it’s a phone that’s sure to last you for a long time. With its top-notch specs and design, you’ll be paying extra, but for a flagship phone, it’s not really that much. Xiaomi has always made great phones at affordable prices, and the Xiaomi Mi Mix is the culmination of all of their previous flagships.