My Big Fat Greek Gyro Update – What Happened After The Profit

My Big Fat Greek Gyro Before The Profit

My Big Fat Greek Gyro was started in the Pittsburgh area by Mike and Kathleen, a married couple. It began as one successful Greek restaurant that expanded with four more franchises. It was starting to have troubles as the two owners argued, and the food quality began to go down dramatically. The couple’s sons were looking to take over the original store. Marcus also noticed inconsistent branding – some of the locations were selling hamburgers and hot dogs. Even the franchisees were unhappy with the owners – as one claimed, the only help they ever received was when the owners showed up to take the royalty check. Marcus was looking to put a clear process in place so that he could help the owners make a profit.

My Big Fat Greek Gyro on The Profit 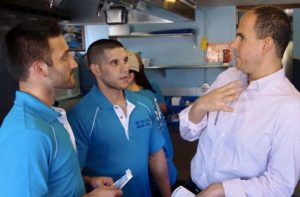 Marcus came to visit the family at the restaurant. His first comment was on how difficult the store was to find. He then heard about the franchising agreement from Mike, who stated that each franchisee paid $10,000 to get the rights to the restaurant for 10 years. Marcus said that franchises, in general, had the ability to be profitable, both from the initial franchise fee, and the monthly royalty cost.

Marcus discovered that Mike goes around himself to scout franchise locations. He took a look at the menu, which the owners developed themselves, and saw many items that were not actually Greek. Marcus asked what was actually made at the restaurant. Mike explained that they made the gyros fresh, and it could be either chicken, steak, or lamb. Kathleen admitted that while she knew how to hand roll grape leaves, they buy the ones used at the restaurant frozen. Marcus looked disgusted.

Mike and Kathleen explained that Marcus would get a better understanding once he looked at their kitchen. He was shown an area that could best be described as a broom closet with a freezer. Marcus was noticing that many of their ingredients were frozen. Marcus said that he didn’t think that a real Greek restaurant would serve frozen food. He said that frozen food not only tastes worse but it’s also more expensive.

Marcus wanted to make sure that Mike and Kathy knew how to make good margins from the Gyro, which was their biggest seller. Marcus discovered that the margin for the sandwiches were 78%, while the frozen stuff did not even come close. He wanted to see My Big Fat Greek Gyro make more fresh items. After further observation, Marcus noticed that Kathleen’s husband Mike seemed to be lording over everyone, and trying to make sure that the restaurant didn’t appear to be “too Greek.” As they owned a Greek restaurant, you can see where the issue lies.  He was also in conflict with his sons, who had wildly different opinions about how the business should be run.

Mike let Marcus know that they were having issues with the name. There was a store in California that trademarked the name, so Mike and Cathleen would be forced to change the name of the brand, not only for the flagship store but also for all of the franchises. This presented a whole different issue – they would have to rebrand not one, but five stores.

Marcus met with Mike and Kathleen to discuss My Big Fat Greek Gyro and its business model, or lack thereof.According to the people that spent the $10,000 to buy into the Greek restaurant franchise, Mike did nothing to support his franchisees other than collect the royalty checks. These businesses were struggling without any assistance from the flagship store. Two of them actually went under before Kathleen took the initiative to call The Profit for help.

He ended up offering Mike and Kathleen $350,000 in exchange for 55% equity, and full control to make decisions. Although Mike wanted to keep more of the business, they ended up admitting that they desperately needed the help. In the end, Kathleen agreed to accept the deal, and Marcus handed the check over. The money was supposed to be dispersed to help the franchisees as that is where Marcus stood to earn the most cash.

Once the partnership was struck, Marcus immediately got down to business. He, Mike and Kathleen met with the irate franchisees. Marcus let them know about the deal and assured them that he would pour as much money into their businesses as possible so that they would succeed. He also advised that they would be restructuring the Mount Lebanon location, and showcasing the new business concept. That concept would focus on a new brand and maximizing efficiency, especially when it came to ordering.

Marcus decided to renovate all of the locations to create a branded look. The renovations made the restaurant bright and clean looking. The new colors were white with bright blue accents, representing the Greek Flag. All of the locations were slated to get free Wi-Fi hotspots. Marcus’s biggest gripes, the costly frozen food and the lack of Greek representation, were also fixed. Fresh-made, authentic Greek items were added to the menus. And, of course, the name was changed so that it no longer conflicted with the California trademark.

The name change was the biggest cause of contention. Marcus declared that the new name would be The Simple Greek, which Kathleen took exception to. She felt like it painted Greek culture in a bad light. She did admit that she liked the new logo, but she was unable to accept the message of the restaurant name. Let’s see how My Big Fat Greek Gyro, now The Simple Greek, does after Marcus worked his magic. 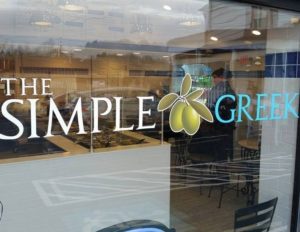 My Big Fat Greek Gyro was featured in an update episode of The Profit. According to that episode, Marcus went way beyond his initial investment of $350,000 which was used to refurbish all of the locations, and open up a new one in Chicago. Marcus had high ambitions for The Simple Greek, wanting to open up locations all over the country. Apparently, Mike and Kathleen were not nearly as ambitious. They took not only their share of the revenue but also the amount that was due to Marcus. Not only that, they have done nothing for themselves to improve their business.

However, the couple tells a different story away from the camera. In December of 2016, the Ferences filed a lawsuit against Marcus Lemonis claiming that they never received even the original amount that Marcus promised them. They allege that they were forced to hand the check back after the meeting scene was shot, and they never saw that money again. Marcus states that the money went into the remodeling of the restaurants, which makes perfect sense to me. In that update episode, Marcus offered to buy out their business, but the couple refused. Apparently, the former owners of My Big Fat Greek Gyro received a letter stating that their refusal signs the company over meant that they “forfeit any interest they have in the Simple Greek LLC.”

The Simple Greek website has Marcus Lemonis’s face all over it. The “About Us” page, still mentions the Ference family but also states that Marcus put a management team in place to help them “carve out specific roles and responsibilities.” There are many new locations from Kentucky to Texas. All the locations have added a build your Greek yogurt bar. While they have 4.4 star reviews on Facebook, many of the new ones are negative. The major complaints are dry meat, long wait times, and poor service. Perhaps the new locations are experiencing growing pains?