In 2003, Sissy Xue relocated from Hong Kong to San Diego, California, so she could give her son Lenny a brighter future. A decade later, she opened Filling Station Pub. The bar was a success thanks to its location as it was situated right in front of the Marine Corps Air Station Miramar. Xue managed to earn $60 grand every month during the bar’s heyday as military personnel flocked into the premises to have a good time.

Xue hired several female bartenders to attract the male clientele. However, these new staff members were not only inexperienced, but also goofed around while at work. They were also very abrasive towards some of the customers. Xue did not hesitate to fire her employees whenever they exhibited attitude problems. Soon enough Filling Station Pub did not have bartenders who lasted long enough to finish training as Xue axed them at the slightest of errors. Those who remained had zero respect towards their boss. As Xue blamed her staff for the bar’s downfall, she decided to install 16 CCTV cameras to watch their actions and scold them once they do something unrelated to work.

Filling Station Pub failed to make any profit as the customers were repelled by inconsistent employees and filthy surroundings. To save her bar, and her future, Xue decided to call for Jon Taffer and Bar Rescue for help.

As Filling Station Pub was in close proximity to the Marine Corps installation, it should have a comfortable atmosphere that would attract the mostly male customers. However, the bar’s exterior did not look very inviting while the interior had unkempt furniture and an owner who loudly cursed at her employees. For the recon, Taffer sent in renowned radio hosts Dave Palet and Mike Costa. The two ordered a Long Island Iced Tea but instead got a pink-colored drink with a lemon slice on top. Most of the bartenders also didn’t know how to correctly mix cocktails. The spies couldn’t order food as the bar’s kitchen was closed for some reason.

Some of the employees drank while on duty, and they took their shots in the bathroom as there were no cameras inside. When Taffer and expert mixologist Phil Wills entered the bar, they caught Xue drinking with the patrons. She was quick to blame her workers for the establishment’s failure and even insisted that they were intentionally making bad drinks. She also challenged Taffer by asking if he ever had any experience working in a bar. The Bar Rescue host countered by revealing that he knew the problems of Filling Station Pub in just five minutes, something that Xue never figured out in her two years of owning the bar.

The next day, Taffer returned with Wills and expert chef Nick Liberato to start the training. Wills taught the bartenders the importance of shaking cocktails with citrus as this softens the fruit’s acidic taste and makes the drink’s taste more balanced. Liberato revived the bar’s hibernating kitchen by training chef Ted how to whip out delicious sandwiches.

In the stress test, Taffer gave cards to the employees and instructed them to give one to Xue whenever she did something positive. Most of the bartenders forgot what Wills taught them during training, while in the kitchen Ted was creating inconsistent sandwiches. The kitchen also had another problem as the floor was flooded with water due to clogged drains. Taffer had no choice but to shut the kitchen down and had Xue mop the floor. This act seemingly gave Xue a change of heart as she began to treat her employees respectfully and with a smile, thus earning her cards. She then joined her employees behind the counter and made drinks with them.

After the test, Xue earned two cards which made her realize that she could actually trust her workers. She also felt that it was better to be with them personally than watch them from the cameras. Taffer then invited Lenny to remind Xue the reason why she relocated to California. For the new menu, Liberato created sandwiches that were ‘nostalgic’ for the military personnel while Wills whipped out cocktails like The American Dream and The Off Base.

After the renovation, Filling Station Pub was turned into Off Base Bar. As it was situated in a strip, Bar Rescue was only allowed to change the brand and the windows. The interior however had many changes like a new wooden bar top, comfortable sofas, and upholsteries on the walls. Behind the counter, Taffer installed three new POS systems and the menu items can take advantage of perceived value as the bar area exuded a sophisticated ambience.

Now with Xue set up for success, Taffer’s work is done.

Filling Station Pub Now in 2018 – The After ‘Bar Rescue’ Update

The bar only had two negative reviews on Yelp for this year which pointed out problems like a jukebox that charged $5 per song, parking lot fights, drugs, and the change of employees. Their Facebook page had many 5 star ratings for 2018, but only a few had actual comments. 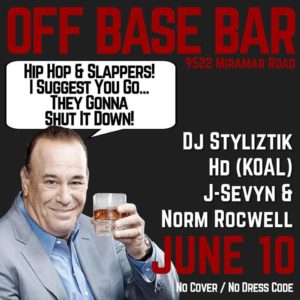 Off Base Bar frequently invited deejays for live music and feature many drink specials. They sometimes mentioned Taffer and Bar Rescue in some of the promos they post on Facebook. Judging by the photos, they kept Taffer’s changes and appear to be happy about it.