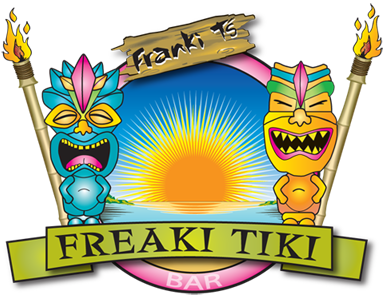 In 2008, Frank Theriault bought the Freaki Tiki bar, letting longtime friend Shawn Trimpe invest in exchange for a 2.5% stake in the business. Frank and Shawn used to work in a nightclub together, and the two thought they could do it better. Frank is the majority owner and combined, they have invested $500,000 in total. At first, things were very exciting because they were the talk of the town. They grossed over $1 million in their first year, and with much success, the two brought on friend Woody Krueger to manage the bar. The bartenders were making great money and everything was going positive.

High on their own success, the owners started joining in on their own party to keep their loyal customers happy. Frank is more worried about friends with people, Woody says – you’re drinking that beer and not paying for it, they are losing the three bucks that they could be making on it. Shawn has a lack of professionalism. When Woody would open the bar, there would be broken beer bottles on the ground and whipped cream on the counter from “bringing some skanks in here after hours and that kind of thing.” Which, legality-wise, is very illegal. There have also been customer complaints about Shawn not giving full attention to the non-attractive females.

With the bar being treated like a frat house, maintenance fell by the wayside. Woody even admits that the kitchen is held together by “MacGyver-rigs,” like the pipes being held together by duct tape. There is no hood/ventilation system so they could not have a fryer in the kitchen; the drains in the sink just leak out, too. Soon, the bar was in such disrepair that no amount of free booze could keep the customers from calling it quits on Freaki Tiki. Now with the business losing $6,500 a month and in the hole $500,000, Frank is struggling to dig himself out. He has maxed out all his credit cards and lost all his savings, and if Frank cannot be helped, he would have to file for bankruptcy. In a desperate attempt to save the business, Frank, Shawn and Woody have agreed to call upon Jon Taffer for their bar rescue.

Outside of Freaki Tiki, Jon pulls up in his car containing two experts. Mia Mastroianni, the mixologist consultant and expert, mentions that the ugly green lighting makes the gorgeous women inside look like zombies. With a beautiful outdoor deck facing the roadway, the design looks incredibly tacky. Even under the green neon light, the food would look repulsive and horrible. The food looks like it would be in trouble and be getting inspected by the police, Chef Ryan Scott says. The place was opened by Frank and Shawn about seven years ago, Jon explains. Frank owns the majority, and Shawn only owns 2.5%.

Inside the bar, Frank calls for shots to be given out and calls for Shawn, “the professional,” to take over matters of the bar. A woman is hoisted up onto the bartop so they could do a body shot. In the back, Frank sits drinking a few shots and beers. The entire bar looks like a basement and nothing is classy about it. There is an entire game room off to the side but nobody is using it, possibly since all the equipment looks like junk. The bar looks like a true frat bar, but this is in a town that has a median age of about 40 to 45 years old. There is no college campus down the street and this is not an infantile market, but they made money for that first few years because they’re on Route 19. 75,000 cars a day would drive by the bar, so when it was new, it made money. Five years ago, people stopped coming in as much and now the bar is losing $6,500 a month.

Frank, the owner, is in debt half a million. Woody, the General Manager, sits uncomfortably to the side. Jon says that Woody kept sending him emails begging for Jon to help. Woody has been running the bar for the last few years, so Jon truly questions if Woody is the gift from the heavens that will be able to solve everything. Bartenders Lauren and Michelle take orders, while cook Robin in the back prepares the food. In the kitchen, Robin does not do a proper job of cleaning the dishes, and even worse, raw meat is sitting right next to the dish drain. This is really, really bad, Ryan says – this is a safety hazard all the way.

For recon purposes, Jon sends in three people to the bar. These three spies are Tracy, Juciano, and their daughter Zoey from “Piratz,” which was another bar that appeared on Bar Rescue. The three meet outside Jon’s car and reacquaint, and Tracy managed to send her daughter to college. The three spies head into the 3,410 square foot space grossing $17 per square foot in sales, $133 less than the required break even point of $150 per square foot. The three sit down at the bar and behind them, Frank takes yet another shot.

One of the drinks is made by using three vodkas. This is horrible form, as they are using flavored vodka and instead of using the ingredients for flavors, they just use the artificial vodka flavors. Nothing is fresh, and there is no fresh fruit for garnishes. The bartender admits he might have over-poured a little bit. The drink is so strong because Tracy won’t even drink. When the three spies ask how the pizza is, the bartender says that the pizza is great. However, in the back, the pizza is made from sauce contained in a jar. Cook Robin pours the marinara sauce on the pizza and then takes her hand, using it as a utensil to spread the sauce around the pizza. She then touches the cheese when she has not washed her hands or put on gloves, then slides the pizza into a tiny oven. Chef Ryan says that the oven is so small that even with five hours to cook, there is no way that the dough could rise. The burger was prepared on a panini press, so unfortunately, Jon has to cut things off early to storm in and stop the food from being delivered before anyone gets sick. 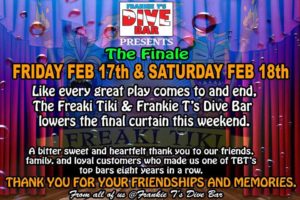 Freaki Tiki Now in 2018- The After ‘Bar Rescue’ Update

Surprising almost nobody, Freaki Tiki has closed down fairly shortly after the airing of this Bar Rescue episode. The bar was renamed to “Frankie T’s” to try and disassociate the mess and clutter with the bar, but unfortunately, this was not enough. This Bar Rescue episode aired in April of 2016 and by February of 2017, the bar has been confirmed to be closed. Frank created one less advertisement and on Friday, February 17th and Saturday, February 18th, Frankie T’s had its finale.

Many of the issues that were brought up about Freaki Tiki were claimed not to be fixed. One anecdote of this is the plumbing, which had always been notorious for not working at the bar. On Yelp, the Freaki Tiki had a subpar rating of about 2-3 stars across only 20 different reviews, but upon the rebranding to Frankie T’s, this barely increased to around 3 to 4 stars across another 20 reviews. While Bar Rescue sets out in an attempt to fix and help bars, some owners and concepts are just mechanically broken and can never be made into an appealing concept geared towards the masses.