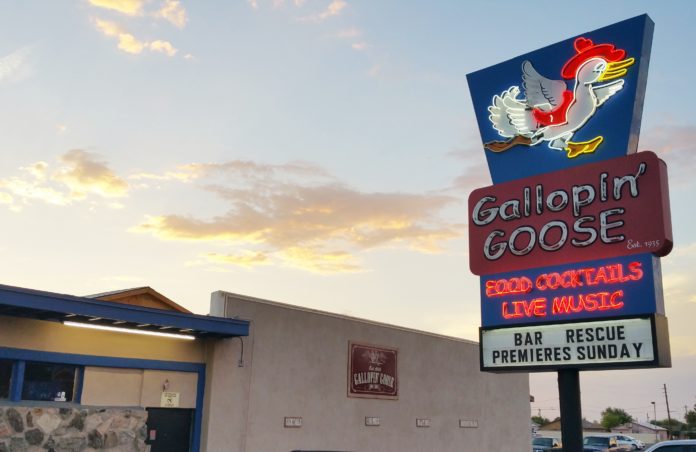 The Gallopin’ Goose before Bar Rescue

As one might have guessed with the decidedly old fashioned name, the Gallopin’ Goose has been in Arizona for quite some time. First appearing way back when Prohibition just ended, the Goose was loose to deal drafts as the first bar (and honky tonk for that matter) to get a liquor license in the history of Pinal County, where the bar is located. Decades before the transfer of ownership to Scott and Stacey Wohrman, who were married at the time, the bar became known across the country as the place that launched Waylon Jennings solo career. For some time, the bar would keep that claim to fame as a golden egg, and from the death of Buddy Holly to the rise of Jennings the place would keep a heavy clientele, especially when Jennings was in town as he’d always do a show there. However, in the decades between his drifting off and the Wohrman acquisition, the bar had become a tough biker bar, before being eventually closed down.

It appeared that for some time, the Wohrman’s did a decent job of running the bar, though family problems would soon arise and overtake any successes they did have. By the time of Bar Rescue’s intervention, the Goose was about $370,000 in the red, losing $2,000 a month, and were about half a year away from closing. And that is where Jon Taffer stepped in.

The Gallopin’ Goose on Bar Rescue

It was clear from the start of this episode that the intervention didn’t need to be just about the bar, but also the bar owners. The now divorced Scott and Stacey were clearly having several issues, including the previous infidelity of Scott which ended up landing him a child outside of his marriage. Amazingly, Stacey decided to return to him for some time and help raise the daughter, and Scott appeared to be a remarkably asinine character, and not so subtly blamed his now ex-wife for his infidelity. This caused a big confrontation between Jon and Scott, which reportedly almost came to blows but ended up defusing just in time. This would end up really biting the business in the behind, as the town really gave Scott the scarlet letter treatment, outright ignoring it despite having essentially no other bars or breakfast places in the area.

Another hit against the bar appeared to be not only Scott’s previous issues and current attitude but that of the bar manager, Amber. Throughout the show, she was shown to have a negative workplace attitude and seemed to be a deterrent to customers. This was contrasted by Amber the bartender, who could be seen holding down the fort and a real gem in what was otherwise a pretty dark mine.

Improvements first hit the kitchens. With bar experts, the bar was able to cut food expenses by 15% and a revamp of the menu made the kitchen and restaurant sides of the bar really shine, where someone could feasibly eat breakfast, then come back to have a few brews and spend the night with friends or a ride home on the Goose Caboose (which has been reintroduced as a safe way to get home).

In terms of the bar, there were good and bad. Starting on the outside, there was some good to be had. The Gallopin’ Goose bar had a sign and name that even Taffer thought should stay around as it gave a fascinating antique feel to the place. The interior however was remarkably worn. It was likewise clear that sanitation was not of the highest priorities, which given ownership had made sense at the time. In fact, Jon ended up using it as a metaphor for the ownership family, which seemed to click with them as he more or less wrecked the bar. One of the key advantages of the bar though was that there was a great deal of open space for the bar, which lent itself greatly to renovations.

Renovations really began with the stage, which at first looked as basic as they come but was greatly improved with some lighting and proper structural definitions (like the truss). Next, the bar’s wood was replaced and refinished with what could be described as a “new old” style, where it was clear the wood was new and well made, but it appeared aged and harkened back to the 50’s, a heyday for the bar itself. A fire pit was also added in the back, which while not explicitly mentioned makes for a quality improvement, certainly. After bar rescue, the Gallopin’ Goose saw further improvements to their outdoor dining facilities (and new bathrooms) which were paid for by the massive uptick in sales and patronage which occurred in the 10 weeks following the Rescue operation. It would seem that at the close of Taffer’s visit, that the Gallopin’ Goose was going full speed towards success.

As to be expected with the resulting interest taken by watchers of the show (and by Scott himself, joking that the show was an “hour-long commercial”) there has been a significant increase in customers to the bar. As to be expected, some experiences have been good, and others not so much. One of the major draws has been the increase of local and somewhat recognizable bands who use the bar’s new stage to drum up enthusiasm, and bar tabs. However, it seems that more than a fair share of reviews claim that the kitchen either isn’t quite up to snuff, or reverted back to old practices a bit depending on who is working it. Service has likewise been spotty, with most saying at least decent bartending and waitress service has occurred, but more than a handful of what could be described as “less than ideal” interactions. Lastly, despite improvements, it seems that both the tap system and some kitchen equipment could use some renovation as many customers complain of only bottle service available, and menu items frequently being unavailable. Most reviews place the Gallopin’ Goose at around 7/10 stars.

Stacey has appeared to have left the bar under Scott’s control and sought greener pastures, but the two are on better terms especially in recent months, with a probable rekindling of their marriage occurring in the near future. All in all, it’s about the best outcome one can hope for; There’s still much to improve, but it’s been proven that both in life and in the Gallopin’ Goose, it’s possible.