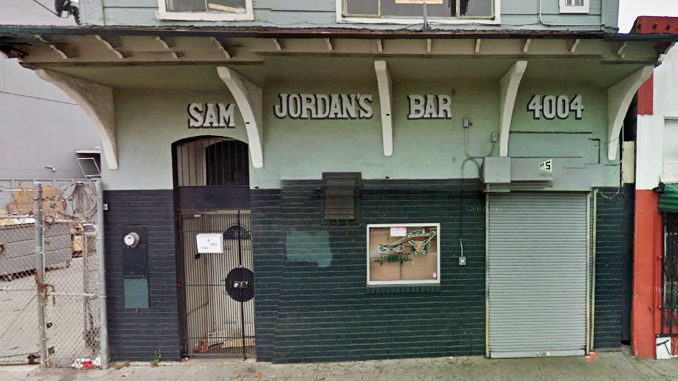 The long-standing bar once named Sam Jordan’s opened in 1959 by famed boxer and civil rights activist Sam Jordan. People came to the bar for Sam Jordan, who was very active in the community. After opening the bar, he decided to run for mayor of San Francisco, and he came 3rd in the election out of a possible 8. His San Francisco community effort secured the bar as a permanent landmark for “extraordinary generosity toward the community.” During the bar’s lifetime, it saw decades of success – there were all kinds of people there, colored, pre-operation, you name it. People from all over San Francisco flocked to the bar to get the good, which is barbecue and soul food. A lot of the food that owner Allen Johnson makes is food that his father made.

As time went on, Sam Jordan’s health started to decline. His daughter said that she would never forget as he left the bar to come towards him, and she would never forget the walk that he had, and she knew something was horribly wrong. Soon after, Sam Jordan passed on, leaving his two children, Ruth and Allen, running the bar with no experience. Ruth knew that she wanted the bar to remain in the family and that they had a legacy to live up to, but they did not know what they were doing. Allen is a part-time landscaper and he admits that making food is more difficult than landscaping. Splitting duties between the two of them, Ruth agreed to work the front of the house while Allen would manage the back.

Working together under the same roof quickly proved that they could not see eye-to-eye on how to run the business. The kitchen is terrible, Ruth says. Bartender Tiffani thinks that Allen means well but he does not have the drive to succeed. However, Allen thinks his food is excellent, though some of the customers disagree and find that the food tastes rather microwaved. If Sam Jordan walked into that kitchen, he would be disgraced and angry. Ruth finds it difficult to communicate with Allen, and their inability to work together has created a divide between the bar and kitchen. This divide is ultimately driving customers out the door – upon Sam Jordan’s death, the family inherited all the debt in the amount of $500,000. Now desperate for help, Allen and Ruth have called for Jon Taffer to perform a bar rescue on their father’s legacy. 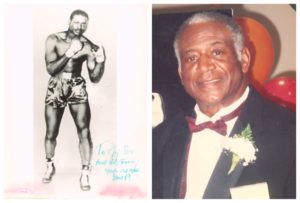 In Southern San Francisco, Jon pulls up with his car of experts to the front of the bar. The front of the bar looks like it has not been painted in ages, let alone decades. Expert mixologist Derek Turner agrees, and as a person of color, he finds it disappointing that such a local legacy has become so dilapidated. Expert chef Vic Vegas agrees, then explains that Sam Jordan served in the navy, became a boxer and won a light heavyweight championship, then ran for mayor. The outside of the bar does not look like an important place owned by an important person. The building has so much history but they do the place a disservice with the lack of any outside decorations.

Even worse on the inside is the lack of any concept or character. There is one little picture of Sam Jordan in the way back of the bar where nobody can really see it. In the kitchen, Ruth and Allen talk about a meal that is being returned, while bartender Tiffani attends to several orders. Bartender Vikki, Ruth and Allen’s niece, is always stuck in the middle of the two while they fight. The family seems like they gave up working together. Clyde, Ruth’s fiance, is also seen in the bar. Jon then sends in his two local spies. The spies enter the 2,500 square foot space with two separate businesses thanks to the divide of Allen and Ruth.

The two spies sit and ask for a menu, which the bar does not have. What if the bartender is not there that can make a cocktail that you like? The spies order something that “is not too much on the sweet side.” Derek looks offended from the car as the cocktails look syrup-y and sugar-y. The drink served is a “pomegranate kamikaze,” which is terribly sweet and tastes like lemonade. The other spy admits that she cannot taste any of the alcohol. To make matters worse, when the two spies ask about the menu and ordering food, Vikki explains that they have to go to the back to order food. This is a terrible inconvenience – there are no waiters or food runners. Nobody helps anyone else out, and everyone is segregated to their own department. 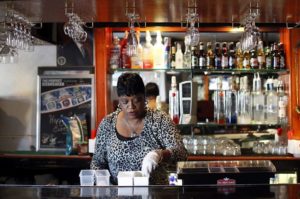 One of the spies orders wings and a smoked brisket. There are separate registers for the front and back of the house. Ordering the food takes a long time to order because there is only one person running the kitchen and preparing food. Vic points out that the place is known for barbecue, so everything should be freshly served and not stored in containers in the back, which it is. The brisket is extremely dry, and Vic explains that they have let the legacy go down the drain. The spies ask about the food, and while the brisket is ready, the wings are not. Ruth explains that if she had it her way, she would never have the food served.

Clyde, Ruth’s fiance, says that the bar does not need the kitchen. This is completely wrong and unfactual – people spend more money on alcohol if they have a good menu to go along with it. In the kitchen, Allen spoons a generous amount of sauce onto the brisket, and Vic says that his stomach hurts just looking at it. The food is finally served in a sloppy mess. The brisket is incredibly dry despite being covered in sauce. Ruth asks the spies if she wants them to take the food back to the kitchen, which publicly shamed Allen’s food. The customers are now afraid to eat the food, and even worse, Vic explains that for every person that complains about their food, there are 26 quiet visitors that simply never return. Jon Taffer has seen enough of the dysfunction of Sam Jordan’s, and he heads into the bar to begin his work.

A few things to get out of the way immediately – the bar is flourishing and is indeed still open, and the name “Sam Jordan’s” was kept. Jon knew that he had to keep the name from the beginning of the bar rescue solely because of Sam Jordan’s legacy. Since the bar rescue, the bar has been flourishing thanks to Ruth and Allen reconciling and the entire program of the bar being renovated. Now, it features Sam Jordan’s legacy front and center, and videos of his boxing fights are played on a loop in the bar.

Sam Jordan’s has an outstanding review on Yelp and Facebook, with more than 28 reviews for a 4-star rating on Yelp and 22 reviews for a 4.5 star rating on Facebook. Most people are praising the menu renovations and expansion, which happened thanks to new equipment that Jon Taffer provided. One of the most interesting things praised about the bar is the ease of parking, thanks in part to the hu

ge parking lot on the side of the building. Sam Jordan’s is still open to this day, although occasionally a negative review can pop up about the slowness of the service, which does not seem to be a common theme.