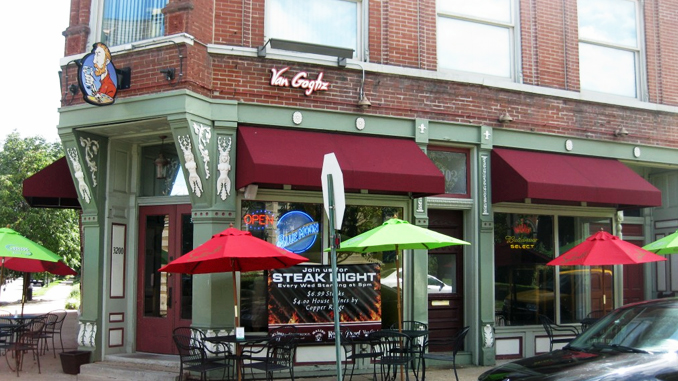 In 2013, bartender Dani Davis purchased the property. She grew up at Van Goghz and started working there in her early 20s, and she thinks of all the patrons as family. The previous owners kept saying that she should buy the bar, and one day, she finally asked how much she wanted for it. For the first six months, the bar seemed like it was turning over and she doesn’t think that she could have done any better business. Manager Kristin says that Dani has great leadership and was at the bar a lot, and was very gung ho about it. Soon, she realized she was unprepared.

The money would come in and then stuff like taxes would come in – the more money you make, the more taxes you pay. Groceries, paying employees, and on top of that, everything in the bar seems to be breaking. Dani became hard to work for, judgemental, and abrasive. Now, with how the bar has been, the interactions between staff have become yelling. Dani has become worn down, and although she tries to get away from the bar as much as possible, it does not always end well – one time she forgot the store credit card at the bar when she left for the weekend, leaving the store with no finances.

Things are honestly easier when Dani is not there, but when she is there, she does not do anything but yell at the staff. Cook Robert admits that he likes working more when Dani is not there. Now losing $2,500 a month, Dani is struggling to dig herself out. She has put in thousands of dollars towards fixing her debt, but she is more than $250,000 in debt. Hemorrhaging cash, Van Goghz is running out of options and is only a few months away from closing down. In a desperate attempt to save the business, Dani has called for help from Jon Taffer and Bar Rescue. 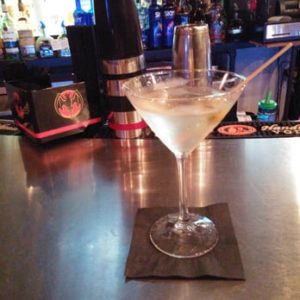 Outside of Van Goghz Martini Bar and Bistro, Jon pulls up with his car containing experts. Around the bistro are numerous art stores and galleries. Van Goghz has a beautiful sign and a nice building, but the bar does not look very inviting or welcoming. Chef Pink, Jon’s culinary expert, says that the building just looks unassuming and uninviting. The martini decal on the window does not pop for customers, and nothing makes expert mixologist Lisamarie Joyce want to enter the bar and explore what options they have.

Inside, Dani sits at the bar having a vape. She worked as a bartender for 9 years and bought the bars only 2 years ago, and is in debt more than $250,000. Jon is told that the financial pressures are getting to her and she can be a real ass sometimes. In spite of her losses, she can still afford to sit there, have a beer and vape away. The area behind the bar is tiny, Lisamarie points out, and there is barely enough room for two people to move around. Inside the restaurant, a dog is walking around and Dani is heard scolding him. The health codes about dogs mean that this is illegal – “dragon lady” Dani is puffing away while the dog is interacting with guests. Jon makes a comment that the dog is more hospitable than Dani is.

For recon, Jon sends in his two spies – local mixologists. Nick and a friend of his serve as the spies and know the area well, and Nick has been bartending for 18 years. Celeste Jo Hughes has been in the bartending industry for around 7 years, so they know their stuff. The two spies enter the 2,500 square foot martini bar, grossing only $105 per square foot in sales, which is $45 less than the industry’s break-even point of $150 per square foot. The first thing Nick notices is the dog lying on the ground, but the two sit down at the bar. Manager Kristin greets the two and gives them the martini menu, as well as pointing out the seasonal cocktails. The seasonal cocktail menu includes drinks like “pumpkin pie martini,” “the lo-lame,” and “not your momma’s mule.” 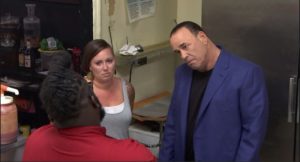 At least Kristin pitches something, Jon says, and the two spies’ attention shifts towards the infusion drink menu. The infusion bottles are disgusting and look like they have been sitting there for months, and Lisamarie says that she would never drink those. Jon grossly explains that the bottles look like “a child after he ate a bowl of chili.” The two order the “Dirty Birdy,” and she is shaking all the martinis; he olives in the drink make it a dirty martini, which means that the drink should be stirred, Lisamarie Joyce points out. The martini looks awful and dirty, like legitimately disgusting dirty. It might taste more like olive than gin, and Celeste looks absolutely repulsed.

The menu features local options, as Dani’s family owns a sausage farm which sends the bar sausage for use in various items. Cook Robert is in the kitchen preparing food, but the kitchen is under equipped – there is a greaseless fryer, a panini press, and a very small (almost residential, Jon says) flat top stove. There is no opportunity to cook a full menu. Celeste and Nick wait a half hour for their food, and Dani starts a minor meltdown in the kitchen. Finally, the two get their food, but the food looks greasy, soggy, and sad. Dani and Robert are heard yelling in the kitchen, which is incredibly unprofessional as the patrons can hear.

The food is surprisingly good, but back in the kitchen, the filth of the grill with the white of the egg is disgusting. Robert flips the egg and the bottom of the egg is filled with burnt particles, which is a biological contamination because there is burnt bacteria all over the grill. Jon, unfortunately, takes it upon himself to storm in and stop the food from being served because of the potential for sickness. Jon demands the bar close for the night, and he gets to work on the bar rescue. 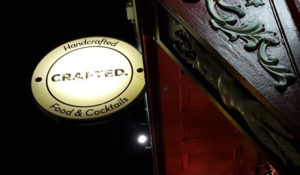 Surprisingly, no members of the staff leave during Jon’s rejuvenation of the bar. All of the staff is trained and caught up to speed on both their professionalism and skills, and the bar is renamed from “Van Goghz Martini Bar and Bistro” to simply being renamed “Crafted.” Unlike most Bar Rescue bars, the bar has retained the “Crafted name.”

Since the Bar Rescue, Crafted has remained open and has even become a popular highlight in St Louis, Missouri. The Facebook page for Crafted is not overly active, but does list weekly specials and highlights any deals. Their Twitter is far more active, where they can be frequently found interacting with fans and patrons. Crafted has also kept the special $6.99 Steak Night every Wednesday night. Prior to the appearance on Bar Rescue, Van Goghz Martini Bar and Bistro had around a 3-4 star review across 42 different reviews, but since the rebranding, Crafted has a solid 4 star review across 96 different reviews. A local article by St. Louis paper Riverfront Times also wrote an article about Crafted, mentioning the appearance on Bar Rescue as well as some of the menu revitalizations that have happened.