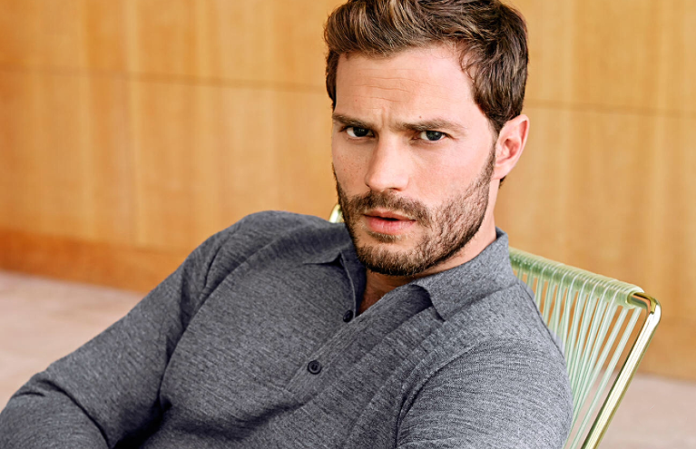 Many people confuse the Republic of Ireland and Northern Ireland (the six northern counties of the island that still belong to the United Kingdom) so when a Northern Irish person makes it big on any scene, they join a small, exclusive circle of cherished celebs. Jamie Dornan is just such a man, acting career on the rise and despite how you feel about a certain book staring Christian Grey, no one can deny that he’s on his way to becoming a household name outside the wee Emerald Isle. What the craic (Irish: the deal, fun, situation) with Jamie Dornan and is the hype for real?

How Did Jamie Dornan Make His Money & Wealth?

Born James Dornan on May 1, 1982 in Hollywood, County Down, Northern Ireland, his family later moved to the Belfast metro suburbs, where he was raised along with his two older sisters, Liesa and Jessica. His idyllic childhood ended at age 16, however, when his mother Lorna lost the fight to pancreatic cancer and barely a year later, four classmates including two close friends, died in a terrible car crash in County Donegal. His father, Prof. Jim Dornan, survived cancer himself and later remarried, and told the Irish Central in 2013 that young Jamie was strong and able to cope with the tremendous amount of grief around him. Jamie attended Belfast Methodist College where he was active in the drama department as well as on the rugby pitch and while he enrolled and attended class at Teesside University in England, he dropped out to move to London and try to find work as an actor.

Pickings were slim in London, however, but Jamie found work as a model for Ambercrombie & Fitch in 2003, eventually working with top names like Hugo Boss, Armani, Dior, and Calvin Klein. Modelling work was lucrative, to the point that in 2006 The New York Times called him “the Golden Torso” but he longed to find fulfilling acting work and finally did, his first role being Count Axel Fersen in Marie Antoinette (2006). More small parts would follow (Beyond the Rave, 2008, Shadows in the Sun, 2009, and the short films X Returns and Nice to Meet You, oth in 2009), but his big break came in 2011 when Jamie was cast in the fairytale-themed Once Upon A Time. It was this role that brought him to the attention of producers and he was cast in 2013 alongside Gillian Anderson in the Northern Irish TV series The Fall, a crime drama that takes place in Belfast. Cast as a sinister serial killer terrorising the city, Jamie has gotten rave reviews from fans and critics alike, but he was about to become a bit more polarising when he landed the role of famed dominating sex-haver (sarcasm intended) Christian Grey in a trilogy of movies based on E.L. James’ Fifty Shades novel series.

Stoking female fantasies hasn’t been all Jamie’s been up to in the past few years. The Fall has lasted three seasons and while he’s confirmed that his schedule has forced him to bow out for now, Jamie has said that he’d be open to returning at some point in the future. He’s also starred in the film The 9th Life of Louis Drax (2016) and will soon be filming opposite Peter Dinklage in the upcoming My Dinner With Herve, as well as a new adaptation of Robin Hood, due out in late 2018. Life is just packed but every role brings Jamie to higher prominence and he truly stands astride a promising career. 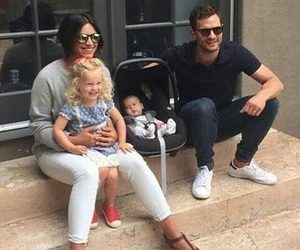 Jamie is married, sorry to disappoint! Though he dated Keira Knightly from 2003-2005, they just didn’t have staying power. He met the fantastically talented actress/singer-songwriter Amelia Warner in 2010 and after a literal whirlwind romance, they got engaged in 2012, marrying in an intimate ceremony in the English countryside in 2013. The happy couple has two daughters, Dulcie (b. 2013) and Elva (b. 2016) and Jamie describes being a father as “the most magical thing”. He told ET Canada that though their schedule is busy, he and Amelia take the girls everywhere, wanting to be part of every special moment and milestone. For some celeb parents, work comes first and the kids are closer to the nanny or personal assistant than their parents but Jamie refuses to let that be the story of his wee family.

While acting has always been his passion, Jamie is familiar with branches of the arts. He performed with the Belfast folk band Sons of Jim until they split up in 2008, having met band founder David Alexander while at Belfast Methodist College. The band released two well-performing singles, Fairytale (2005) and My Burning Sun (2006) as well as touring their native Ulster, and the entire UK with Scottish-born singer-songwriter KT Tunstall. While crossover between acting and music is relatively common, not everyone can run two careers at the same time and while acting’s won for now, is a return to the gig scene in Jamie’s future?

Has Jamie won any awards? 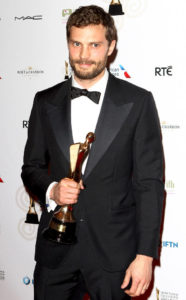 Jamie is certainly no stranger to the red carpet! In 2014 he won a British Press Guild Award (Breakthrough Award) and two Irish Film and Television Awards (Best Lead Actor: Television and Rising Star for The Fall). While nominations have been coming in fast and thick since his big break, 2016 was a slightly…ignominious year, when Jamie was awarded two Golden Raspberry Awards (Worst Actor and Worst Screen Combo) for Fifty Shades of Grey but as the film was overwhelmingly panned by critics for the poor script, ridiculous plot and poorly-written source material, at that point who can really blame the actor? To go along with his leading man seduction persona, however, it’s worth noting that in 2014, Jamie was ranked at #3 in People Magazine‘s Sexiest Men Alive rankings. This formal model looks good on film, there’s no denying it, and once he gets out from under the shade of Fifty Shades, we’re expecting several shelves of awards to come his way.

What does Jamie do with his wealth? 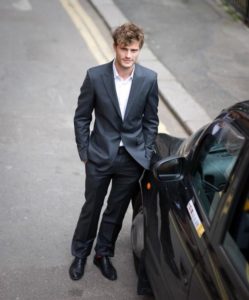 Coming from the simple Belfast suburbs, Jamie knows there’s no need to go to excess with money and so he and wife Amelia tend to keep a low profile. He drives a black Audi A5, which at first might seem excessive (German luxury cars aren’t for everyone) but in the associated costs and style of European cars are far lesser in actual Europe. Currently living in England, they opt for simple days out in the countryside with their two beautiful children over exotic adult getaways in the tropics. “Folksy chic” was what The Daily Mail called their outfits on one such holiday excursion in Gloucestershire, noting the absence of designer labels, rare in an age of Instagram where a lot of money can go into the ‘just out of bed look’. It can be refreshing to find local people who make it big but stay the lad you knew in school who just happens to also be on the big screen and Jamie is certainly just that, free of the pretensions of the contemporary celeb scene.

What’s next for this Belfast boy? He’s keeping a low profile to live a normal, paparazzi-free life but it’s confirmed we’ll be seeing him in upcoming Emma Forrest drama Untogether, as well as the final puzzle piece in the Fifty Shades trilogy, Fifty Shades Freed, due out in 2018. Although he prefers to keep off social media (no Twitter or Instagram), Jamie Dornan brings a bit of that refined, old-world traditionalism to the celeb scene, eschewing the accepted ‘culture’ and living his life on his terms. No matter where he goes from here (and we’re sure it’s only up!), Jamie’s brought a bit of himself and a bit of Northern Ireland into our lives and that’s pure class, like.

UPDATE: This article has been updated with Elva’s correct name.