Pacific Hospitality Update – What Happened After The Profit

Pacific Hospitality Before The Profit

Pacific Hospitality is a family run furniture business that’s been open for over 40 years. Gilbert Martinez immigrated from Mexico to the United States in 1979 and opened up the furniture manufacturing company in the suburbs of Los Angeles. Pacific Hospitality Design catered to a commercial customer base. His daughter, Ana, saw the business grow up as she did, and she now oversees the design of the furniture. Gilbert looks after the production aspect of the firm. Together they built up big accounts with such large companies as Caesars Entertainment, MGM, and the Coffee Bean.

Unfortunately, their sales have taken a nosedive recently. The dire situation is mostly due to heavy drop off in quality. The camera panned to Ana apologizing to a customer for an order being late since they did not have the cash flow to purchase materials for the pieces. Marcus narrated that the bills were piling up, and orders were becoming delayed. He wanted to help since he already had experience with the furniture business due to his investment in Grafton Furniture. The investor believes that the two companies would make a good match.

Pacific Hospitality on The Profit 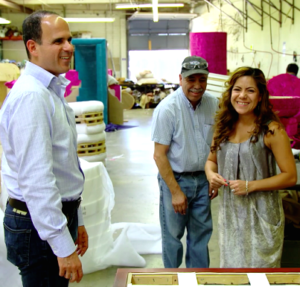 Marcus appeared at the showroom for Pacific Hospitality. As he waited for Ana, he took a look around. He describes what he was seeing as domestic products, and Marcus expressed to the camera that he thought they were showing the wrong stuff if they were trying to sell commercial furniture. Ana came to the front when she became available and introduced herself to Marcus. She informed him that they’ve been in their current location for 13 years which impressed him. Eventually, Gilbert, the elderly owner, wandered out to greet Marcus, who is the potential savior of the business he’d started to grow over 40 long years ago.

Ana explains that the majority of the business centered around restaurant furniture, public space furniture, as well as guestroom furniture. 90% of the work that they did was in hospitality with just 10% making up residential and retail sales. Marcus was taken on a tour through the warehouse. Ana showed Marcus of 400 piece order that was for Planet Hollywood. Ana said that she does all of the design work which he loved, but she’d have less and less time to do it as she’d been forced to take over other responsibilities.

Ana explains that they would make about $2.8 million this year in revenue, although she was not sure if they would make a profit. Marcus gave her look, and she acknowledges that she was aware that she should know her numbers. She said that they’d been in the red by $46,000 last year. She admitted that her dad likes to take on customers that would undercut them because he wanted to accept all potential business.

Marcus was not impressed with their knowledge of their financials, or their margins which were abysmal. With the competitiveness of the furniture market, Marcus acknowledged that it was natural to want to underbid. However, he still wanted to see their margins closer to 55 to 60% instead of the current 28%. Marcus was not only thinking of their profitability but also covering their losses from potential damage. As he walked around the rest of the building, he discovered that it was chaotic. There is no flow to the way the furniture was being made. Spare spaces were covered with raw materials and damaged goods. Marcus felt that they could be much more efficient. When he spoke with Gilbert, the elderly owner stated that the biggest problem he saw was cash flow. Marcus discovered that Ana controlled the cash, along with an accountant.

Ana informed Marcus that she and her husband personally put in $75,000 to the business. They definitely need help. Marcus went through their financials and learned that three months of the year they didn’t make any sales whatsoever. They had over $400,000 in liabilities. Marcus asked Ana what she intended to do; Ana tearfully told Marcus that she wanted to take over Pacific Hospitality because she felt like the furniture business was in her DNA. Marcus wanted to be there to assist her to fulfill that dream. He’s always had a soft spot for other immigrants such as her father, having been one himself.

Marcus offered them $300,000 in exchange for 45% of the business. He wanted Pacific Hospitality to join forces with Grafton Furniture. That money could go towards improvements in the facility as well as improving working capital. 5% of Grafton’s equity would be given to Pacific Hospitality to make it fair. Ana and her father agreed to the deal.

Steve and Stevie (now known as Steven) Grafton showed up in LA to have their first group employee meeting. Marcus announced the agreement and informed the employees that he was now 100% in charge as usual. After the meeting, Steve Grafton was going around to all the furniture and pointing out flaws. He told Marcus that the products were hospitality quality, but not up to par with residential standards. Marcus wanted to plop the process from Grafton to Pacific Hospitality, but first, they had to get rid of all the old inventory. They soon found that Ana was emotionally attached to it. Some of the pieces that they were trashing represented the blood, sweat, and tears that she put into the company. After a minor outburst, she relented and realized that it was an essential part of the process.

They began the remodeling process once all the old stuff was out. With that part taken care of, Marcus took Steve and Ana to pitch another of Marcus’s investments – The Simple Greek. Ana and Steve immediately clashed, both wanting to design and control everything. Each of them got two weeks to come up with a concept for furniture for the restaurant. When they presented, the business owner was not thrilled with Steve’s design. He called it too dull and ordinary. Steve was unwilling to take any criticism, constructive or otherwise. He felt like he’s created solid furniture pieces, which was true. His work lacked vision.

Ana was up next, and you could tell she was more focused on the feel and the mood of the restaurant, and what The Simple Greek was trying to project to its customers. Sam, the owner of The Simple Greek, was thrilled with Ana’s innovative designs. Ana made the deal. When it was all over, Marcus complemented Ana on both her sales pitch and her design prowess. He wanted to renegotiate the transaction to make Pacific Hospitality and Grafton Furniture into one company.

Marcus wanted Steve to run the business and financial aspects of it, while Anna would take over the design completely. Steve, of course, threw a fit and did not appreciate that design was being taken away from him. Marcus finally got him to recognize that his talents were in manufacturing and business. Ana was now in charge of the creative side of all of Marcus’s businesses. He wanted her to do the design work as well as the sales pitches. He told her he’d spent a long time trying to find someone who would be as good. Let’s see if everything ends up working out after their episode airs.

Pacific Hospitality Now in 2018 – The After ‘The Profit’ Update 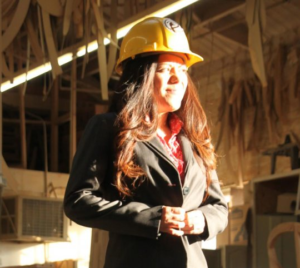 After Pacific Hospitality’s stint on The Profit, Ana became more involved with what she loved- designing furniture.  Since she didn’t have to worry as much about her father’s failing health, she was able to throw herself more into the design process. Marcus now has a showroom in New York for all of his creative investments, and Ana designed the furniture as well as the office layout. She also did design work for Pet Stuff, Sweet Petes, and Farells. Ana’s personal Facebook page often shows photos of her working on new products. Pacific Hospitality, or PH Designs as they now seem to be called, launched a catalog on their website with residential furniture designs. The company was recently featured in the style magazine Modern Luxury. They update their website and social media pages regularly, and seem to be growing with The Profit effect.