Stitches Net Worth 2018 – How Much The Rapper Actually Makes 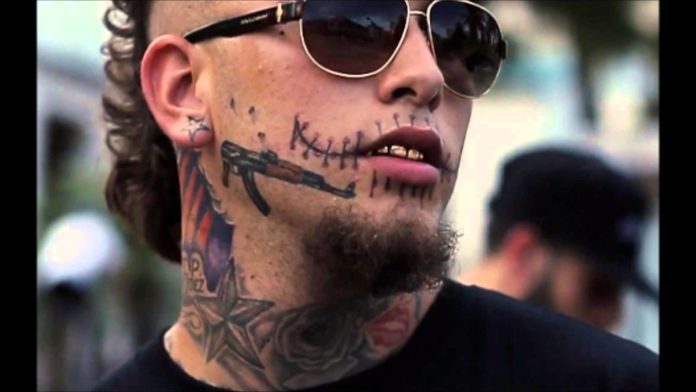 I love these articles on young up and coming rappers. There is a formula to them. A bit of research is all you need to figure out where they make their money. The up and comers are way different from the established acts in terms of income source, and in the rap scene there is a kind of circular back scratch thing going on for a lot of them. Not quite the case with Miami rapper Stitches. The painted man, Stitches, is a solo power house. his rise to fame off the back of  a viral video has seen him go from strength to strength, monetarily at the very least. Very much one of the new age stars, his wealth struts bear more than a passing resemblance to YouTube or Vine stars. Born of social media, outside the studio system. Not to mention the fact that, if his lyrical subject matter are to be believed, he has a certain side gig that is likely as lucrative.

So let’s get down to it, find out who Stitches is, how he makes his money and where he might be going in the future.

How Did Stitches Make His Money & Wealth?

Phillip Nickolas Katsabanis, better known as Stitches, was born in Miami Florida, and is of Cuban and Greek Descent. His parents split when he was a one year old, and he lived in variety of Neighborhoods in Miami with his mother. He started dealing drugs at 14, and got his own apartment not long after. The drug dealing was his primary income up until 2014, and his experiences in that world are an important part of his songwriting process. He first rose to national stardom through his debt music video, titled Brick in Yo Face, a hardcore rap track with a level of aggression I usually hear only in metal music. It went viral,  currently sitting at 21 million views.

He is not currently signed by any label so far as I can find out, and yet the young rapper is making waves. He has released several mixtapes, an EP and four full records since his debut. Most of his music is available for free, but you can buy it on iTunes, as well as find physical copies in some places. I imagine that it isn’t the biggest money spinner he has access to though. A look into his social media accounts reveals some interesting things.

Stitches has 340,000 subscribers on YouTube, with many of his videos breaking the 1 million view mark. Considering the subject matter of his work it is not likely that he is pulling in the big ad revenue, but there is bound to be a fair few folk put there who want to sell via connection to Stitches and his work. He also has an Instagram, with 1.3 million followers, and I do hope he is leveraging that audience, real money to be made there.

Stitches most recent record, I Need Rehab, is remarkably well put together. I get a kick out listening to all these different artists when I write a net worth article, much of it isn’t to my tastes, what with jumping from near incomprehensible Trap Rap to bland Pop Country, but this album is pretty good. I went from Brick in Yo face to I Need Rehab and the difference is night day. He argues that he always rapped about real things, his real life, that record is about as personal as it gets.A wider range of influences are at play, and genre wise it seems to leap all over the place, but in a good way. Well worth a listen to.

Overall, while I am sure that Stitches is making bank in the traditional method for a musician, but the importance of so called new media should not be overlooked for this artist. His popularity blew up online, and so much of his money is coming from online sources. With a new release a few months back, I am sure that Stitches is touring, whether he will ever put up for a real country wide tour is unknown.

Up in the air so far as I can tell. He got married back in 2012, so a woman called Erica Duarte, whether they are together or not right now is not known. There is no reference to a divorce, and I know they were still together back in 2015, due to reports of Erica shutting a Stitches show down due to the artist inviting women onstage to do some cocaine. In his most recent music he talks about his children a lot, with reference to disregarding women at the same time, indicating that the pair are no longer together.

Does Stitches have any children?

Stitches has three kids, thoguh I culd only find out the name of two of them, Rex and Rocco.

Where is Stitches from?

Stitches is from Miami, he is of Greek and Cuban descent.

Is Stitches a Drug Dealer?


I am sure if you asked him he would say no. his most recent record revolves around his attempts to remove himself from the world of cocaine selling, while at the same time pining for the simplicity of that time. I think it is safe to say that he is no longer a drug dealer.

Where can I see Stitches this year?

Stitches has no dates scheduled this year. It might have something to do with being an independent entity, as tours are typically financed by record companies. He plays regularly in and around Miami, so if you want to see him live you are going to have to travel to him.

Why was Stitches arrested?

Stitches was arrested in January 25th 2017 in Miami on a felony drug charge. Police stopped him in his car, a Porsche, at which time they asked him if he had any weapons in the vehicle. He replied in the negative, handing the officer a joint. A search of the car was made. A mason jar full of weed was found, along with a Glock 19, 46 rounds of ammunition and one Oxycontin tablet. He made bail almost immediately. Results of the case are pending.