Tea2Go Update – What Happened After The Profit

Tea2Go was formed in Dallas Texas in 2013 by Jeff Hunt and his son Taylor. The tea shop, which was built up to be a franchise, served made-to-order beverages, and also offered loose teas that are sold by the ounce. Unfortunately, they did not take the time to prove that the business model would work, and though they once had 19 franchisees, eight of them failed to thrive. Jeff owns two of the shops, and both locations were failing. Tea2Go is over a million dollars in debt, and Marcus was willing to help. 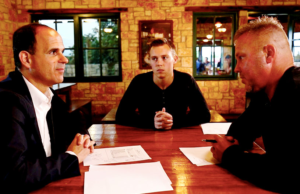 Marcus felt that the tea industry was worth building upon, and since Tea2Go already had 11 locations, he would be working with a solid foundation. He visited the location and introduced himself to Jeff and Taylor before taking a look around. Marcus called the store bare-bones, as there was no food, tea accessories, and there was no point-of-purchase system.

After speaking with Jeff and Taylor a bit, he discovered that their relationship was complicated. Jeff had Taylor when he was just 16, and was not around for a good portion of his son’s life. They only began to develop a relationship when Taylor was legally an adult. Jeff asked Taylor to drop out of college with only a year remaining to help with the tea business, and Taylor complied. Marcus felt that this was not the best parenting decision, and might be proof of bad judgment.

Marcus began to go over the financials with Taylor, who was able to rattle off the price of each individual thing that goes into making one cup of the made-to-order tea. Quite impressive for a 23 year old. Marcus discovered that the drinks had a 90% profit margin, which he stated caused him to become interested in the tea business.

The next item on Marcus’ agenda was to discover why they decided to avoid serving coffee as an alternative, or even food to enjoy with the tea. Jeff admitted that it was a cost issue, and he was not a tea drinker himself. Marcus said that it was easy to see why they were having such trouble staying afloat.

Taylor said that they got their tea from one distributor, which they were massively in debt to, and Jeff said that they were up to almost $1 million in manufacturing costs alone. He built out his two locations, as well as 2 other buildings that went to franchisees. The $30,000 start-up costs he collected from the franchisees went towards paying down his debt, but it was nowhere near enough.

Marcus visited the owners of a few of the franchises. He noticed that they were more enthusiastic about tea, and paid more attention to detail. Another store sold accessories and food which they paid for themselves. Marcus saw a responsibility to make these locations profitable. Since he was going around, he decided to visit Taylor’s store, which he was massively disappointed in. It looked dirty, and not well maintained. Jeff admitted that he allowed it to keep running because he felt guilty about not being their when Taylor was young.

When Marcus asked Taylor why he didn’t work in the same location as his father, he was told that their relationship was “interesting.” Taylor said that Jeff never earned the father role, but Taylor didn’t see him as a dad. Marcus saw that Jeff was throwing money at the issue to keep Taylor in his life.

Next, Marcus, Jeff, and Taylor sat down to discuss the financials. Marcus discovered that the company was insolvent – Tea2Go had a net worth of -$700,000. Marcus told the pair that he saw the bones of a good idea – he wanted branding, a different name, and proof of concept. He offered them $300,000 in exchange for 75% of the concept. Jeff tried to negotiate, and they finally settled on $350,000 for 70% of the business and being completely in charge.

As usual, Marcus gathered all of the franchisees along with Jeff to inform them of the deal, and the change in ownership. Taylor wasn’t there, and Jeff did not know where he went. He finally walked in after Marcus had already started the meeting.  This left Marcus feeling like Taylor was choosing whether to be an adult or a kid. Marcus took Jeff to task, letting him know that he had to manage his son better, no matter how much he wanted to be his friend. Jeff admitted that Taylor had plain not shown up to an important meeting because he was drunk. Marcus was pissed. Marcus confronted him and told Taylor that he was on his last straw.

Marcus went to the supplier and offered him a percentage of equity in Tea2Go in exchange for forgiving the debt that the company had on the receivable. They shook on it, and Marcus said that he also wanted to get into the spice business as it was so related to teas.

They next had a meeting with all of the franchisees, plus the latest owner. The franchisees had a bunch of complaints about the lack of the product, lack of help, and and zero direction. Jeff was getting defensive, but Marcus redirected everyone by announcing the new concept. Marcus wanted it to be called the American Tea and Spice Shop, which all of the other owners loved. THe meeting ended with a round of applause.

Marcus decided to remodel one of the stores to build out their concept, but it wasn’t one of the ones that Jeff or Taylor owned. Marcus felt that the franchisees deserved it more. They went around to different suppliers for accessories and food. Taylor even took the time to apologize for his past behavior.

Marcus thought that things were going really well until he received a call from Manish, the tea supplier, and the new partial owner. He said that Jeff was still selling franchises with the old concept and the old paperwork. Marcus wanted Taylor to realize that it was serious- since Taylor was an officer of the company, he could be held liable for criminal fraud charges.

When Marcus attempted to moderate the conversation between Taylor and Jeff as Taylor told Jeff that he did not consider him to be his father, or call him by that title. When Jeff threatened violence over being disrespected and told Taylor that he was a mistake, Marcus looked extremely frustrated. Jeff agreed to stop selling franchises, but he was still angry.

The three of them met up at a diner a couple days later. The father and son duo hadn’t talked in a couple days, which was not normal for them. Taylor explained that he had been playing a role of a good son, whatever he thought that Jeff would want to see from him. Jeff, of course, did not respond well. He let his pride get in the way of communicating with his son. Jeff said that he would no longer be able to trust Taylor, and said “That’s the end of it, right there.” He meant that he would be withdrawing all support, such as house payments, phone, and car help as well. Jeff gestured towards Marcus, and said that Marcus could offer him a job, but Jeff was done supporting Taylor. It seems a little harsh for their first honest conversation.

Manish, the new partner, was teaching all of the franchise store owners the ins and outs of tea and spices. Marcus assured Taylor that he would still be getting a paycheck even though his father cut him off. Jeff was the only one that was not working, and Marcus wanted to find out why. Once they met, Jeff revealed that he had offered the current franchisees the option to leave Tea2Go if they did not like the new model. That would mean that it would be competing with Marcus’ concept, American Tea & Spice. Marcus was understandably upset.

Marcus said that he was fine with dissolving their deal, and running American Tea & Spice as his own concept. He would work with Randy and Dawn, and let the other franchisees make the decision on their own. Marcus warned Jeff to be careful as he sometimes skirted the line legally without thinking through all the consequences. They shook hands, and Marcus wished him luck.

Marcus orchestrated the grand opening of American Tea & Spice, and all of the franchisees that stuck with Marcus through the process of building it out were very happy with the results. The store looked bright and clean and was decked out with affordable spices and brand new teas. Marcus let Taylor know that he was proud of him for putting the work into the store, and also showing that he was growing up by arriving early and helping in any way he could.

Marcus announced that the company would be paying for Taylor to go back to college, which he had quit (at Jeff’s insistence) to help out with Tea2Go. The grand opening saw a bunch of people lined up outside the doors, waiting to get in and experience the brand new store. Local business owners came to show their support. Marcus announced that he wanted to turn the American Tea & Spice store into a franchise that really helped its new businesses to thrive and make money. Let’s see how they did after the episode aired. 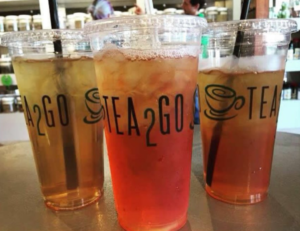 After The Profit episode aired, Jeff Hunt posted a response on his Facebook page saying that it was just a show, and what Marcus did and said was all for theatrics. It looks like only one franchisee went to the American Tea and Spice store instead of Tea2Go. Unfortunately, many of the Jeff run stores close down without alerting their customers first. Unsurprisingly, Jeff was sued twice for his questionable business tactics. Taylor began his education again in January 2017. He thanked Marcus on his own personal Facebook page. American Tea and Spice rebranded itself as American Tea and Coffee. It doesn’t look like they’ve opened up any other franchises, but it’s still early. Pictures on the Tea2Go Facebook page indicate that Jeff has rebranded to mirror Marcus’s changes, despite not taking the deal. Only time will tell which one will be more successful.