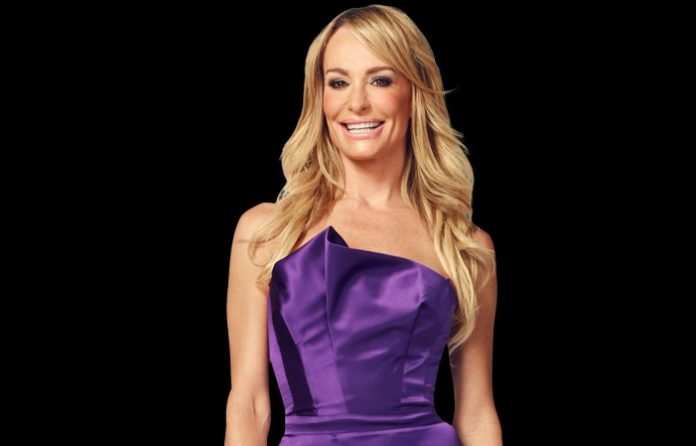 Taylor Armstrong, the glamorous star of Real Housewives of Beverly Hills has overcome personal tragedy and a troubled marriage to emerge as a firm favorite of fans of the show. Taylor has written a best-selling memoir of her life before she found fame and spared no details about her marriage to ex-husband Russell. She has proved herself to be a strong, resilient personality who has come through the upheavals of her marriage to emerge as stronger, tougher and more popular with her fans than ever before. But what is Taylor Armstrong doing now in 2018 and can we expect to see her back on our screens in the near future? Read on to find out.

Taylor was born as Shana Lynette Hughes on June 10th 1971 in Independence, Kansas. Her family moved to Tulsa, Oklahoma when she was young and she attended Union High School, where she was part of the cheer-leading team. After graduating from high school she moved to California to followed her amibition of becoming an actress. Shana went through a few name changes until she settled on Taylor Armstrong as her stage name.

Taylor worked in a start-up e-commerce business and then moved to Beverly Hills after launching her own textile company. In 2005 she met venture capitalist Russell Armstrong after meeting him while waiting for a table at a Beverly Hills restaurant, and after a whirlwind romance lasting just a few months the couple married. The following year the couple had their first child, daughter Kennedy Caroline and to their friends and family it seemed like the couple had the perfect life and marriage, but in reality life was far from perfect for Taylor. She had had doubts about marrying Russell even before the ceremony, by then he had already verbally abused her, and he had also warned her that he was not a ‘nice guy’, but Taylor was determined to look at the situation positively and quashed her doubts about her new husband.

Over time Russell’s behavior became even more domineering and eventually he began to subject Taylor to physical abuse too, even worse was the fact that the physical abuse began when she was pregnant and particularly vulnerable. Taylor was determined to bring her daughter up in as stable an environment as possible with a father and financial security and she hid the truth about her troubled marriage even though, in her own words, she felt as if she was walking ‘On land mines’ most of the time. Russell was usually involved in several business deals at any one time, and the couple led an affluent lifestyle filled with regular parties at their multi-million dollar home in Beverly Hills and vacations in exotic locations.

In 2008 Taylor landed her first major role, in the reality TV show ‘The Hills’, she only appeared for one episode but the glamorous blonde with the engaging and occasionally quirky personality was popular with viewers, and in 2010 the Bravo network offered her a place in the sixth instalment of their hugely successful ‘Real Housewives’ franchise. Real Housewives of Beverly Hills followed the activities and lives of Taylor as well as co-stars Camille Grammer, Adrienne Maloof, Lisa Vanderpump and sisters Kyle and Kim Richards. The show featured the professional lives of the ladies but it also showed plenty of their private lives too, and Taylor’s crumbling marriage was not something that could really be hidden from the constant scrutiny of the cameras.

In January 2011 the first serious problems were apparent to viewers when Russell walked out of the party held for Kyle Richards’ husband Mauricio. Taylor revealed in an interview at the time that Russell was dealing with considerable stress due to financial problems with his business deals, and she also alluded to some ‘emotional challenges’ at home, but she still felt the need to protect her husbands public image despite his abusive behavior. All that changed on the night of her 40th birthday in June 2011 when Russell punched Taylor in the face and she ended up in hospital with a damaged eye socket and shocking facial injuries. After Taylor had to comfort her distressed daughter while still covered in bruises in a hospital bed she knew that enough was enough, and she filed for divorce in July 2011.

Meetings with attorneys to discuss the upcoming divorce and custody of their daughter began to take place and the couple both spoke about their failed marriage to the press. Russell spoke about the stress of being ‘pushed to extremes’ by the lack of privacy that being on Real Housewives show had caused and he admitted that he had at times acted in ‘The heat of the moment. Taylor agreed that the cameras had only made their problems worse, but she also spoke at length about Russell’s violent behavior, and the press soon discovered that it wasn’t the first time Russell’s volatile temperament had landed him in trouble. In 1997 he had been arrested after assaulting his first wife Barbara, which resulted in him being placed on probation for three years and ordered to attend anger management sessions for a year, but the counselling did nothing to curb his aggressive nature, and the violence continued into his marriage with Taylor.

Taylor Armstrong’s Split From Her Husband And His Suicide

The pressure on Russell increased in August 2011 when he was faced with a $1.5 million lawsuit from MyMedicalRecords.com, who alleged he had committed unethical financial transactions. It emerged that even though he and Taylor had appeared confortable financially to the public, in reality they had been living beyond their means for years, and financial diasaster was never far away. In August 2011 Russell failed to show up for a meeting Taylor had arranged to discuss custody arrangements for their daughter, and Taylor drove to the friends house he was staying at in Mulholland Drive. It was there that she found the body of her estranged husband, in a fit of despair Russell had hanged himself without leaving a suicide note. Despite the violence of their marriage, Taylor was shocked and devastated by the shocking circumstances of Russell’s death, and the Bravo network and her Real Housewives co-stars rushed to support her and Kennedy, who was just 5 years old at the time.

In 2012 Taylor began actively supporting the 1736 Family Crisis Center, a Los Angeles based Non-profit charity organization that supports victims of domestic abuse. She has remained a major promoter of the work of the organization ever since by holding fund raising events, promoting their work on TV, including on Entertainment Tonight, and she even created a customized bracelet made by highly regarded crystal jewelry designer ZenJewelz by Zenjen with all proceeds from sales going to the charity. Taylor Armstrong also wrote her memoir in 2012 and the book, ‘Hiding From Reality : My Story of Love, Loss and Finding the Courage Within’ was published in February 2012. The work was widely praised by Taylor’s fans and literary critics alike who unanimously commended not only her bravery during her difficult marriage, but also her well-written prose, which helped the memoir become a best seller later that year.

Taylor’s life since the death of Russell Armstrong has gone from strength to strength, and in November 2012 she became engaged to her attorney John Bluher after revealing to the media that he had been the one person she had been able to depend on for the last difficult year. Her Real Housewives co-star Brandi Glanville, who had come to verbal blows with Taylor on more than one occasion was quick to condemn the engagement as John Bluher had still not finalized his divorce at the time. Brandi and Taylor had had a much-publicized boozy feud on camera just a few months earlier and Brandi asserted in the press that nothing would come of the relationship, but she was proved completely wrong when John and Taylor married in April 2014 in the coastal Pacific Palisades in California.

After the wedding Taylor revealed that John was looking to adopt Kennedy and that she had taken her daughter to a psychologist after Russell’s death, but as Kennedy was so young when her father died the psychological scarring from his sudden death had been minimal, and the new family were looking forward to moving back to Los Angeles and getting on with their new married life. Taylor appeared in VH-1’s reality show ‘Couples Therapy’ in 2014 and since then Taylor has been looking to expand her Television experience with roles in Drama series and films.

Taylor left the main cast of Real Housewives after three seasons but continued to make regular guest appearances throughout the next three seasons, and of course she continued her on-off feud with co-star Brandi Glanville, most notably when they fell out over Brandi’s crude remarks about fellow housewife Joanna Krupa, and on that occasion Brandi discovered that Taylor is more than capable of showing her strength and speaking out about anything she doesn’t agree with these days. After their brief feud was carried out on social media for a few days, Brandi even seemed to admit defeat by tweeting that her morning was ruined, that she couldn’t stop crying, and that she was going back to bed for the day.

Taylor Armstrong continues to promote the work of the 1736 Family Crisis Center frequently and has become a respected advocate and supporter of victims of domestic abuse. Taylor also supports other charities, particularly those that support women and she recently spoke about her formerly troubled life at a YWCA ‘Women who Care, Share’ event in Oklahoma City. Earlier in 2017 reality TV fans were hoping that Taylor might make a return to Real Housewives franchise after Real Housewives of Orange County star Vivki Gunvalson tweeted about hanging out with Taylor and her husband for a weekend, which led to much speculation in the press that Taylor may come back to our screens in the future, but to date there have been no further hints regarding a possible return for Taylor, who perhaps is enjoying every moment of her new found happiness with John and Kennedy, and who could really blame her after the tumultuous drama of her previous experience in the limelight.

Taylor has also got back to her entrepreneurial roots this year with the launch of a vitamins and supplements supply business, Liv Fit Labs, LLC, and she also finds the time to regularly post updates on her blog. She is active on Twitter where she is followed by 600,000 fans and regularly reports on her activities, and it’s clear that Taylor Armstrong is finally living a fairytale life with a perfect husband, and this time she isn’t hiding anything.