Loren Beech, or as she is now known, Loren Gray, is most famous for her meteoric rise to stardom on the various social media sites. The 15-year-old has worked her way up to millions of followers on her and stick Graham, musically account, and even Facebook and Twitter. Loren works as a model, and also has a strong YouTube presence is with her personal channel as well as a collaborative channel with other YouTube personalities such as Brennen Taylor and Baby Ariel. It’s called Our Journey.

How Loren Beech Got Famous

As she is still young, her parents are trying to protect her personal information as much as possible. Not much is known about her early life. Loren was born on April 19, 2002 in Pennsylvania. Her parents each have their own Instagram accounts. Loren’s mom posts a lot of professional pictures of her daughter, as well as some baby pictures, and candids of the family traveling around with their famous daughter. You get some was behind-the-scenes looks at the modeling shoots as well as the occasional photo of Loren in her pajamas, in bed and working on schoolwork. Here’s the link to her Instagram.

Loren’s father mainly posts selfies of himself and Loren’s dog Crusty. From these pictures, you get a glimpse of Lauryn’s house. The kitchen is wallpapered with a leaf pattern and has brown curtains on the windows. The living room has a fireplace that Crusty the Chihuahua likes to sleep in front of. The family also has a fuzzy gray cat named Stephen. You can also find out on his Instagram that he is a gigantic nerd that plays Magic the gathering. You can follow him by clicking here. You can tell that both of her parents are hugely supportive of their daughter’s career in social media.
Loren Beech’s Modeling Career

Loren Beech registered for Twitter and signed up for Younow about a year later. She really became popular on social media when she started posting videos on both YouTube and musical.ly. The lip-synching videos that she posted to the musical.ly app gained her more than 14 million followers and got her nominated for two different Teen Choice Awards. The social media star was recruited to the modeling management company Women 360. She has also joined up with famous YouTube stars like Baby Ariel on a collaborative channel called Our Journey. In 2017, she went on the Spring DigiTour with personalities such as Tyler Brown, Blake Gray, and Nathan Triska.

Despite only being 15, Loren has dated a few people since she became famous. In 2015, she dated an “older man”, a 16-year-old social media personality named Joey. After that, she went out with another guy in her field, he won the Roman. They dated for just two months from September 2016 to November 2016. It seems like Loren Beech is taking some time out from dating to concentrate on her career. 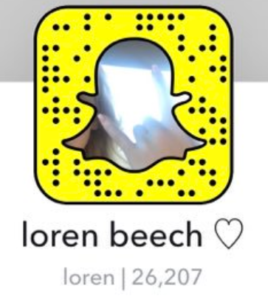 While it doesn’t look like Loren Beech has a personal profile on Facebook, or at least one that is public to her fans, she does have an official Facebook page with lots of great content. Loren has almost 300,000 Facebook followers on her page. She uses the social media platform to share some professional photos, and also posts many throwback photos. It seems like its a way to share her nostalgia with her fans. Loren Beech also uses the status sharing site to show her fans some appreciation. For example, she posted an excited looking selfie when her Instagram page resched 6 million views.

Loren goes by Loren Gray on the microblogging platform. The model has over 642,000 followers on the site, and you can join the masses by following this link. Loren Beech posts daily musings on life such as “does anyone else get a sour taste in their mouth when they watch someone else eat sour food? Or just me?” and “goodmorning it’s Thursday and you know what that means. nothing.” She also seems to be a fan of memes and recently shared a picture of a tiny dog in tomato sauce. Because, why not?
What is Loren Beech’s Instagram name?

Click here to follow Loren Beech’s Instagram feed, where she posts artfully cultivated content. Many of the photos have tones of red, black or white, and it makes for an enjoyable viewing experience. The model has posted over 600 times and gained 6.9 million followers on the photosharing site. Loren seems to post mostly promotional and professional photos, with a few candids mixed in. On October 8th, she shared a morning pic of her legs, wearing workout pants and sneakers. She was holding a cherry Tootsie Pop. Loren Beech posted a selfie labeled “sick,” and although she is sporting a messy bun and looked pallid, she still looks better in the photo than most of us regular people look on a good day.
What is Loren Beech’s Kik Username or Code?

While Loren does not seem to have a Kik username or at least not a public one, she does have an ask.fm. She responds to her fans, and asks them important questions such as “Anyone seen IT yet?” and “What’s more important- inner or outer beauty?” You can find her ask.fm page by clicking here. She has 23,826 followers already.
What is Loren Beech’s YouTube Page?

Loren goes by her new branding name on YouTube instead of her given name of Loren Beech. She joined the video sharing site in 2012, and has amassed over a million subscribers and 27.3 million views since that time. Her videos are neatly organized into playlists such as “vlogaroos,” “collabs,” and “Q&As.” She posts many videos with her current boyfriend. Loren also shares challenge videos and travel vlogs on a regular basis.