Spoonful Of Comfort Update – What Happened After Shark Tank

Spoonful Of Comfort Before Shark Tank

Marty created her chicken soup business under unhappy circumstances. Her mother was dying of lung cancer, and Marty was miles and miles away with no way to visit. She wanted to send something to comfort her dying mother, but nothing she found online seemed quite right. The traditional candy or flowers seemed overdone and too gaudy for the situation. Six weeks later, Marty’s mother died, and she had an idea for a business. What better way to send someone sick or sad some real comfort than chicken soup? Spoonful of Comfort was born.

She enlisted the help of her husband’s friend, Scott, who invested a lot of his own money into the soup shipping company. The pair decided to acquire customers through a daily deal site, and they were an instant success. Lots of customers were purchasing the care packages for their loved ones – the issue was that Spoonful of Comfort was losing money – and fast. They needed the help of the Sharks.

Spoonful Of Comfort on Shark Tank 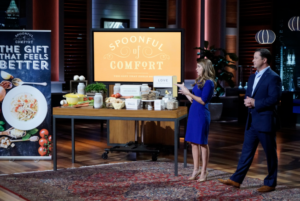 The entrepreneurs behind Spoonful of Comfort walked out into the Shark Tank and onto the stage. Marty Weimer and Scott Gustavson introduced themselves, and their business. The two asked for $400,000 in growth capital in exchange for 10% of their business.

They started off the presentation by asking the Sharks to imagine that a loved one was sick or hurting. She said that it was natural human instinct to want to comfort them in some way, but with busy lifestyles and people being across the country from each other it was not always possible. Scott cut in with a shaking voice saying that the traditional options have been to send either flowers or candy in these times of need. Marty told the Sharks that there is a better option out there in Spoonful of Comfort.

Marty said that there is nothing compared to the comfort of good old fashioned chicken soup. Scott, with his voice seriously cracking now, said that it wasn’t always easy to get soup across the country in an expedient way. Marty explained that their business allowed customers to pick out a care package from their website and have it shipped to their person in need. The care package included a large container of handmade soup, and a half dozen each of rolls and cookies that were hand baked. Scott said that it would make both parties feel better and at a cost that was less than a typical bouquet of flowers. Scott ended the presentation by asking the Sharks who wanted to taste of the growing Gourmet soup business. All of the Sharks excitedly said that they wanted samples.

Robert pointed out that there are now six Sharks on the stage, and said he hoped that they brought enough for all of them. Marty insisted that they did as they handed out trays to each potential investor. The Sharks each seemed to enjoy the soup. They were given a sample of the chicken noodle as well as the tomato. While everyone else was making yummy noises, Robert asked Marty and Scott about their margins.

Marty explains that each care package cost the customer $69.99. That just included the soup, the rolls, and the cookies. Laurie asked if it included shipping, and Marty explained that it did not. The Sharks went from seeming impressed to horrified. Marty attempted to explain that shipping was $14.99, and that was relatively cheap. Kevin countered by saying that he now had the choice between sending someone soup or sending his kids to college.

Robert interrupted his snark and said he wanted to hear more about the business. Marty explained that she had come up with the idea behind Spoonful of Comfort when her mother developed breast cancer, and Marty was hundreds of miles away from her family home. She wanted to send something comforting, but none of the traditional options felt right. Once her mother passed, she was inspired to make Spoonful of Comfort her new passion in life. When Barbara asked Mardis male partner how he got involved, he explained that he had invested 1.3 million dollars over a period of time. The business had originally started on a Groupon type site, and their product was popular but they were quickly losing money. It cost them $18 to acquire a customer and $31 to make the product. When they were selling it for $35, they were clearly losing all of their margins.

Kevin asked Scott if they had repeat customers, and he admitted that was a problem with the business model. Barbara cut in to say that while she liked the idea, she wanted more immediacy. When they found out that overnight shipping costs an additional $39 on top of the price of the suit package, all of the Sharks were floored. It didn’t matter that Spoonful of Comfort had made$1000000 in the 12 months that they were in business. The business model wasn’t sustainable.

Barbara said that the business was too complicated and she couldn’t believe that the investor had put 1.3 million dollars of his own money into the business already. The real estate mogul went out, stating that she would like to pull a Kevin and tell the entrepreneurs to take the business out to the back and shoot it. Mark went out as well, stating that he believed that they were in the marketing business, but they were bad at marketing and were expecting the Sharks to pick up the slack.

Daymond told them that he like the concept. However, he thought that their target market was too small, and he didn’t see it expanding at the current valuation. He went out reluctantly. Lori informed Marty that she likes the taste of the chicken soup, and she thought that the convenience of the package was great,  and the rolls and cookies were cute. Unfortunately, she didn’t see a Spoonful of Comfort getting big to the point where she would actually get her investment money back. She thought that Marty and her friend might be able to make it work for them, but it wasn’t scalable. She went out.

Robert was up next. He told them that there is no one in the world who like soup more than he did. Unfortunately, he saw that  Spoonful of Comfort had been in business for 5 years already, and they had not worked out all the kinks themselves yet. He went out. Mr Wonderful was up next. Kevin cruelly got their hopes up by saying that they were lucky that there were now six Sharks so that they weren’t dead in the water already. He crushed those hopes by telling them that he was out. He explains that every single shark and the room had at one point invested in a Food Distribution Company. He knew that the customer acquisition cost was the entire issue and he didn’t know how to help them get it down. For that reason, he was not going to invest.

The entrepreneurs thanked the Sharks for their time and walked off the stage. It must have been especially devastating for Marty who had started the business when her mother had died. She only owns 40% of it, since the other investor, who is a friend of her husband’s, had taken 60%. Let’s see how they did without getting a deal from the infamous Sharks.

Spoonful Of Comfort Now in 2018 – The After Shark Tank Update 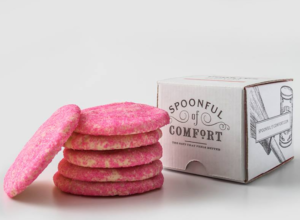 Spoonful of Comfort is still up and running despite the lack of a Shark Tank investment. They have expanded their selection to include Butternut Squash, Fall Harvest Vegetable, and a Gluten Free package. The site is designed so that so that consumers can shop by occasion such as Get Well, Sympathy, Corporate Gifts, New Parent Gift Basket, Thinking of You, and Just Because. Each selection includes a 64 ounce jar of soup, half a dozen cookies, a customized ladle, a half a dozen rolls, a personalized note card, as well as custom packaging. The customer can choose between the different soups, and pick either sugar, chocolate chip, or oatmeal raisin cookies.

It seems like the two entrepreneurs took the Sharks advice about scalability to heart. They introduced new cookie only packages as of August 29, 2017. According to their blog, the cookies include free 2 to 3 day shipping, and customers can choose between two and four dozen of any of the four different flavors that they want. Spoonful of comfort also offers a handwritten note that you write an advance along with the package. Two packages of the cookies is a reasonable $19.99. I think it’s good that they included a lower priced option, so they wouldn’t be completely priced out of the market. Another new addition to their website is add-ons at checkout. Customers can choose to send along calming tea, an overall honey package with the dipper, a warm blanket, or a fancy apron. They have over 1400 reviews on their site, and so they are overwhelmingly positive. It seems like they’re making it on their own without the help of the Sharks.