Solemates Now in 2018- The After Shark Tank Update

Becca and Monica met at Goldman Sachs after they got their undergrad degrees. They spent a few years there before going to Columbia for grad school. Once at Columbia, they came up with the idealist for the heel clips that would become Solemates. They worked on that dream all throughout grad school, and when they went back to Goldman Sachs. The business began to take off and the to quit their jobs to pursue their dream. While they were slowly turning a profit, they still need the Sharks to help expand. 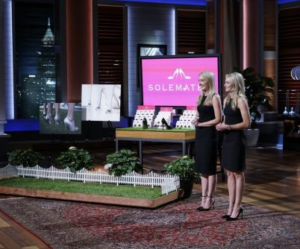 Monica Ferguson and Becca Brown walked out into the Shark Tank, and onto the stage. The audience was treated to a short five-second clip of the two women excitedly talking about how fun the presentation was going to be before the countdown started. They introduced themselves and told the Sharks that they were seeking a $500,000 investment in exchange for a 10% equity stake in their business, Solemates. Becca began the presentation by telling the Sharks that women have a special relationship with shoes, especially high heels. Robert almost immediately looked distant and disinterested.

Becca went on to say that high heels make women look taller, longer, and leaner. She continued, stating that that look came at a cost. Monica picked up where she left off. Appealing to Lori, she said that everyone has experienced being in a wedding, dressed to the nines, when the heel of their shoes sinks the grass. Monica listed off a few more examples, citing getting her heel stuck in a subway grate or a crack in the sidewalk. She described the experience as embarrassing and expensive. As Monica spoke, a video played in the background, showing the male Sharks what exactly she was talking about.

Becca described their product, Solemates, as a cap which goes on the end of the stiletto. The idea was that it increases the surface area of the heal itself, which dissipates the pressure of the walking woman. It would prevent the heal from sinking into grass or getting stuck in a crack. Becca finished the presentation by saying that wearing the Solemates on their heels would liberate women to walk wherever they please without having to worry about damaging their shoes or hurting themselves. She asked which of the Sharks would like to be their soulmate, and invest in the business.

Robert asked Monica if she was wearing the clip-on Solemates, and Becca confirmed that they were both wearing them. Lori observed that Becca was wearing a dark color to complement her black heels, but that she could also use a clear one. Monica nodded and then informed the Sharks that the clip-on’s came in clear, black, gold, and silver as she passed out samples. Robert asked how much they cost. He was shocked to learn that each pair cost $10, and the box of three that he was holding would be $30 since they were all different sizes. He told the ladies that their margins must be incredible.

Becca told the Sharks that she wanted them to try the product out before they went into specifics about the financials. Kevin looked apprehensive, although whether it was because he was wary of people not disclosing their financials right away, or if it was because he was worried about having to try on high heels wasn’t clear. They told Lori that they had a pair of heels for her to try on, and Robert feigned anger that the entrepreneurs behind Solemates had not thought to bring heels for him, and the other male Sharks as well.

Monica and Becca grinned and said that they came prepared for with heels and samples for everyone who wanted to try them. Mark Cuban flatly refused, but everyone else was game. The Sharks all (except for Mark) got up and removed their shoes to try on the heels. Robert hiked up his pants and sauntered around. He said that he felt very comfortable in the heels, and his stride looked practiced. Monica explains that there were several hazards on stage, like a grate and a sheet of grass and that the heels only had one Solemates clip-on so that the Sharks could really test the difference.

All of the Sharks stated that they were able to feel the difference immediately. Kevin tottered around the stage and denounced wearing heels in general. “This is not a good thing for you” he exclaimed. “I’m not sure that I’ve helped your product.” Mark still refused to get up and try them.

As all the Sharks sat down, Kevin asked about Monica and Becca’s background. They explained that they met at Goldman Sachs, and learned a lot from the experience as they both did different things around the corporation. Monica stated that one of the first things that you learn at Goldman Sachs is that you are not expected to know everything, but you should know who to go to for everything. Becca told the Sharks that the pair came and because they were sure that the Sharks were who to go to for what they needed.

Kevin said that he was getting excited because they were in his space. “High heels?” Robert asked incredulously. “Banking.” Kevin clarified. But he wants to make sure that they were going to give him the correct valuation metrics. Based on their investment ask and their proposed equity, they were valuing the Solemates company at $5 million. When Kevin told him to bring it on, Monica looked very nervous.

She told the Sharks that they were able to do $1.1 million in revenue in the past year, and they were on track to do 1.5 million this year. The Sharks seemed impressed. Robert said that he didn’t think that they could make 1 million in a year in his wildest dreams. Becca let him know that they were selling in over 3000 retail stores such as Nordstrom’s, DS W, and David bridal. Becca claimed that it’s a product that a woman doesn’t think about it until she has an issue with her shoes, and from then on, after discovering it at the store, she is a lifetime customer. Monica followed by stating that they fit right in the middle of the woman’s shoe industry and the wedding industry. She claims that when other women see someone wearing Solemates in the grass not having an issue getting around, they will get the info, and order them for their next party or wedding event.

Kevin asked about their cash flow, and they said that they broke even with the 65% gross profit margin. Mark inquired as to how much they invested, and Becca told him that they invested hundred thousand dollars together, and raise 1 million from angels, friends, and family. Lori wants to know how many partners there were in the business, and they kind of skirted the question by saying that they each own 40% of the company.

Robert said that the main complication that he saw was that to really get their sales going, he wanted to be sure that there was a distribution channel in place already. Monica said that it was a bandwidth issue – it was just the two of them working in the business and one full-time person that served as the operations manager.

Mark said that something is not adding up for him. Solemates had a 65% margin against $1 million, which should’ve meant that they had $650,000 in gross profit. He wanted to know where the rest of the money was going. Monica said that the money was going to contractors such as web developers, graphic designers, and photographers. The only had a net profit of $30,000 after each taking their salary of $80,000 per year. Kevin said that he understood.

Lori told the entrepreneurs that was not something that everyone needed. Most people don’t wear high heels. She gestured to the males sharks sitting beside her. She also mentions that all women wear spiky high heels – some will only ever wear wedges or flats. Monica said that there are occasions where even those women would want to wear a stiletto, and Solemates was like having an insurance policy on the shoes. It would protect the heels from getting damaged whether the consumer bought the shoes for a hundred dollars or thousand dollars. Lori still went out, saying it wasn’t a good investment for her.

Mark even was having a different issue with the product. The numbers were not adding up for him. Solemates would have to make $5 million in profit, and he did not see getting there. In order to get to that number, they would have to hit $50 million in sales. He went out as well. Becca let the remaining Sharks know that they would never quit their jobs at Goldman Sachs for a business that they did not believe in 100%. Daymond told them that even if they started going up in sales, it still faces escalating costs. He said that they would have to make $5 million a year for 10 years, and by that time he didn’t think that we would still have grass. Daymond went out.

Robert said that he felt like the women were creating a new category kind of like Spanx. Solemates might not be a necessity, but it helped people to look good, so they would buy it. He told them he was about to make them an offer that they probably would not like. Robert was willing to give them $500,000 in exchange for 25% equity, which I did not think was unreasonable. However, both women made faces at the offer.

Lori pointed out that Mr. Wonderful was still in the running to make a deal. Kevin said that he was struggling with it because he liked the business, but thought that the valuation is nuts. He offered $100,000 at 10%, and want to loan the additional $400,000. That would be valuing the business that only $1 million. Robert told them it would be crazy for them to take that on that much debt as a small company. Monica asked Robert if he was willing to go to $500,000 in exchange for 20% equity, and after careful consideration, he agreed. The three shook on it.

Solemates Now in 2018- The After Shark Tank Update 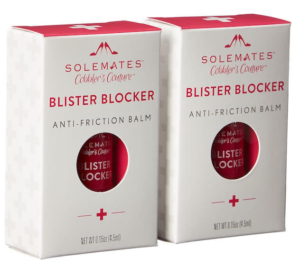 According to an interview that they posted on their blog, the two women behind soulmates rejected both of the Sharks offers in the end. Even though they ended up not taking Robert’s deal, it looks like they were still doing well after their episode aired due to the Shark Tank effect. As far as reviews go, it’s hard to be being called “genius” by Oprah. The heel clips have also been worn by Carrie Underwood, Demi Lovato, and Lauryn Conrad. Their website offers free shipping on orders over $20. They also got more into the bridal market by offering complete bridesmaids packages. Solemates also offers related products such as freshener spray for shoes, customizable shoe rescue kits, and shoe buffs.