Doug had been in the food service industry for over 40 years, and he brings all of that experience to his entrepreneurial ventures. Before bringing the butter melting gadget Biem to the Shark Tank, Doug Foreman founded the bean-based chip called Beanitos. This was the first ever bean-based snack chip, but not Doug’s only chip invention. He also brought the baked tortilla chip to the United States in 2010 with the Guiltless Gourmet. Those ventures had landed him media attention in Forbes and Inc, and he was once named Entrepreneur of the Year in the early nineties. With all of that success, let’s see how Doug will do on the Shark Tank when he presents his new kitchen gadget. 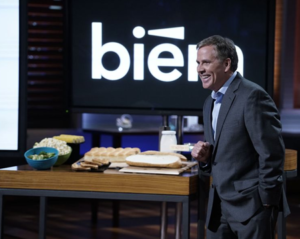 Doug Foreman walked into the Shark Tank wearing a fitted gray suit and a button-down blue shirt without a tie. He faced the Sharks, took a deep breath, and began his presentation. He introduced himself, told the Sharks that he was from Austin Texas and let them know that he was seeking $500,000 in exchange for a 5% equity in Biem, his kitchen gadget company. Doug said that he loved cooking, and being in the kitchen. One of the best parts of cooking was using real butter, but it always was hard and cold. That consistency tore up toast and melted butter makes popcorn a soggy mess. The Sharks all look like they were wondering how they ended up at this moment, listening to an entrepreneur talk butter up to them.

Finally, Doug got to the point. He was on the Tank to promote beam, a spray that uses real butter. He claims that he invented a device that would turn a stick of butter into spray within seconds. The screen behind Doug showed the process as Doug explained it. He would insert the stick of butter into the top of the device and use heat and air to make the butter into a spray without chemicals and artificial ingredients. He began to use the company’s name is a verb.

“You can Biem a pan,” he said, explaining that it was also able to be used on rolls, corn on the cob, or anything else you want to use butter on. Doug ended his presentation by asking the Sharks he wanted to help him make the world a “Butter” place. The sharks all smirked, and Lori asked Doug if they could take a look at the product. Robert jumped up to give Lori hers because she was too little to get one herself.

Each Shark got a Biem machine with the bowl of popcorn. Kevin munched on the popcorn as Doug explained that the gadget automatically turned on and started heating when you lifted it. This impressed the Sharks. Lori asked if it started melting the butter when lifted, and Doug affirmed that it did. He claims that it only melts the butter that you need. It wouldn’t just keep melting.

Lori laughed and stated that it does more than her car. Daymond asked Doug to tell the Sharks about himself and give them information on how he came up with the Biem. Doug explained that he began a company called the Guiltless Gourmet in 1989. He had been working in the food service industry for most of his life, and he said about bringing the baked tortilla chip to the United States. Lori exclaimed that she loved those. Doug told the sharks that he had sold the company and had a good exit from it. He said that he got married and had kids but had a slightly worse exit from that. This also got a couple laughs.

Kevin asked what price point that they would sell the Biem at, and Doug said that they sold at an average of $137. Daymond asked how much it cost to make the unit, and Doug told him $46 but they were also working on bringing it down. When Lori asked if the Biem was patented, he told her that there are patents pending for both utility and design. Robert wanted to know if there was any other company who also sold the melting’s butter sprayer. Doug said that there was not. Robert then asked what Doug’s idea to earn his 10 million-dollar valuation was. Doug explained that the cooking spray market was booming, and he planned on going directly to consumer first and an online marketplace. Doug thought that he would be able to sell hundred thousand units in his first year which would equal out to $10 million.

Daymond said that he wanted to give the $500,000 in exchange for 17.5% equity. This devalued the company significantly. When Lori began to ask what issues there were with the product, Daymond stopped her. He addressed Doug and said that he was an amazing entrepreneur and he knew the area well. Doug could have an equally as amazing partner in Daymond for the 17.5%. Kevin O’Leary came into undercut Daymond to add a 15% equity stake Kevin said that he knew the wine and food arena well, and had sold directly to customers without having to use the retail space. Daymond said that he would match Kevin’s offer.

Robert cut in, stating that he had a question about the product. He wants to know if there’s something he could remove from the product to make it cheaper. Doug stated that they could take out the stainless steel outer shell. Lori pointed out that he would have a cheaper model, as well as a high-end luxury model of he, did that. Doug said that he would be open to it. Lori asked if the cost could be substantially less if it was made with a different material and Doug said yes. Lori made him an offer because she liked this product as well as his skills. She proposed $600,000 in exchange for 20% of the company. Robert told her that she was giving beam and even lower valuation than both Kevin and Daymond. Kevin said that the offer was worse as well.

Robert offered $500,000 at 10% equity which severely undercut the other sharks. Doug thanked him. Daymond said that he’d seen it before where the entrepreneur had a bunch of offers that he wasn’t responding to, and nothing good came from it. Daymond claimed that it would start to get ugly, and offers with the can to disappear. Marcus let Daymond know that Doug obviously valued his company more than Daymond was offering, or you would’ve taken the deal. Daymond run requested a no word counter from Doug, but before he could have a chance to respond Kevin asked Mark if he was going to make an offer. Mark asked Doug what he wanted and Doug didn’t give a straight answer. Daymond pulled his offer off the table, stating he would not like what Doug’s deceptive behavior in a potential partner.

Lori asked Doug what he had thought would happen before he came to the tank the night before. Doug said that he saw marks working in an e-commerce space, and in building infrastructure, and he admired it. Robert asked if Doug was saying that he couldn’t the same thing. Robert was insulted because he really wants to partner with Doug, and then Doug came in set on Mark Cuban. Robert was out. Daymond smirked and said that he had predicted the whole thing. When Kevin asked Mark if he was in or out, Mark said that he was out because Biem was a bad fit for him.

Kevin told Doug that he needed to make a decision, and come down from the 5% equity asked. Doug asked Lori to match Kevin’s offer and Lori agreed. This seems to piss Robert off even further, with him saying that if he liked the deal, Doug should just take Kevin’s offer. Lori pointed out that there is a big difference between her and Kevin. Lori, getting fed up, decided to offer 14% equity that she wanted Doug to answer her quickly. She felt like she should go out if he didn’t value the prospect of working with her enough to get excited about it. Doug asked her to do a deal. She thanked him and got up to hug him, Kevin look slightly disappointed. Let’s see how Biem did after their episode aired. 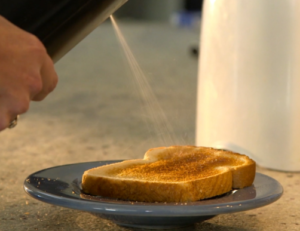 Since appearing on Shark Tank, the Biem butter sprayer has been active on social media and their website. They are currently out of stock on their website but are taking pre-orders for the standard Biem that was shown on the Shark Tank, as well as the Biem gift pack, which is just the regular gadget but with an extra rechargeable battery. That extra costs the consumer $30 more dollars. It does not look like the cheaper version that Lori had based her deal upon has been rolled out yet.

It’s hard to say whether or not the deal went through once the cameras stopped rolling. In interviews with Doug after his appearance on Shark Tank, he mentions the boost that being on Shark Tank had on his sales, but nothing about help from Lori, or working with the Shark on new projects. The Facebook profile and Twitter page for the business mention nothing about a finished deal either. The Biem butter sprayer was on various crowdfunding sites instead, and it earned almost 7x the original $42,000 that the company had asked for. Not bad, although it would have been better for the company to still be selling the butter sprayer on some platform. You can sign up for updates on the Biem website by clicking here.