Rhonda left her career as a stockbroker to chase her dream of being a singer. She loved to entertain people – when she sees smiles and everyone having a good time, that’s what makes it worthwhile to her. She took over a struggling karaoke bar in 2011 and named it Rockin Rhonda’s. She had built it from 8 people on a Friday night to standing room only. Her patrons named her “Rockin’ Rhonda” and she carried the bar to its initial success. They did as high as $32,000 in a month, and were doing karaoke 7 nights a week which was unheard of in the area. Then, in 2015, Rhonda’s life was turned upside down.

Hurricane Matthew came in, and standing water rose up to the dance floor and in the bathrooms. The insurance company denied her claim, saying that the building was old and this was due to happen. Overwhelmed, Rhonda quit on her bar and didn’t train her staff. Bartender Sylvia followed someone around for a day, and even barback Jackson says that he taught himself. Rhonda drink whatever liquor she didn’t give away, and even her staff knows that when she’s working, they get bought drinks. Even worse, Rhonda cut corners that drove regulars away.

Now, the bar is literally falling apart. The building is old, but Rhonda isn’t doing any basic repairs or maintenance. If there’s a couple bigger women on the dance floor and they’re bouncing around, it looks like it’s about to cave in. There’s holes in the ceiling, and Rhonda has 17 buckets around to catch the water from the ceiling. Bartender Jasmine says that structurally, the building is about to cave in. And so, Rhonda is about to cave emotionally. With over $100,000 in debt, if Rhonda doesn’t get her business back on track, she will be ruined. She even feels like she’s drowning.

All of the patrons and staff love Rhonda, who has performed dozens of benefit concerts for the sick, ill, and wounded. However, Rhonda is facing the loss of everything, and she has reached out to Jon Taffer to help perform a bar rescue.

In Sanford, Florida, Jon performs solo recon on Rockin’ Rhonda’s Lounge. The establishment is a classic neighborhood bar. Sanford has a median age of 35, and is located in an area with a median income of $34,000, which means it isn’t overly wealthy. However, Rockin Rhonda’s Lounge is located on South Orlando Drive, where 27,000 cars drive by every day. It clearly has the potential to be successful.

Jon has had the bar under surveillance for weeks, and explains that Rhonda bought the bar more than 5 years ago and is in debt $100,000. Normally, he would be performing recon at night, but his team identified a serious structural issue with her floors. As a matter of fact, the beer coolers seem to be falling through the floor. Years ago, Jon had this same problem with the bar Murphy’s Law. It took weeks to fix the structural damage beneath the floor, and Jon is not sure if he has the time to do it. He has to first see if he can actually fix the bar.

Jon arrives at Rockin’ Rhonda’s Lounge, and greets Rhonda politely (for a change.) The two greet, and Rhonda is ecstatic to see Jon Taffer in the flesh. Rhonda tells Jon that he can yell at her, but Jon explains that he could be at 1,000 bars, so he came here. Rhonda admits that she only has $45 in her personal account, and is down to the absolute wire. Jon instructs her to grab a pad and a pen, and together, the two of them will create a list of things they need to accomplish and move from there. 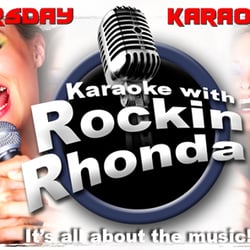 Behind the bar, the beer cooler is clearly sinking through the floor. It was standing in water due to Hurricane Matthew. Rhonda admits that she wears back braces, so she is hurting herself by working. One of the bartenders points out that as Jon walks, the entire thing is on a slant – literally the entire floor is sinking. The patrons are actually looking uphill. The entire bar floor is in need of fixing, and he needs to also fix the bar. However, he has to fix the floor to fix the bar to fix the back bar. The coolers behind the bar don’t cool or close properly. There is an $80 residential refrigerator behind the bar.

There are also no workstations for people to prepare drinks. Food is prepared in the back, and the only food available includes wings, eggrolls, chicken quesadillas, “Jamaican beef patties,” and corn dogs. Jon jokes that the beef patties bounce off the bar. In the back, all the food is prepared in a residential microwave oven. There is no cooking space. The freezer is also damaged, and requires velcro to be attached in order to close it.

Rhonda admits that she wants so much more from her dream, but she has been struggling so much with the bar – she just doesn’t have the money. Jon sits down with Rhonda, and says that he needs to find out if she’s emotionally able to do this. Rhonda was a stockbroker and mortgage broker and made money early in life. She always had a talent for singing, so she started her own DJ and Karaoke business. She has missed many basics such as the cost of a drink. She pays around $4,100 a month in rent, so in order to make money, she has to make ten times that. Currently, she is making $19,000 a month. Business has been terrible.

Jon asks that if he walked into her house right now, would it be clean? The bar is a mess, and so is her house. She’s burnt out and lives in a trashy house, and her dog is suffering from heartworm. Jon calmly explains that they are in a neglected room, and she is the one who neglected it. 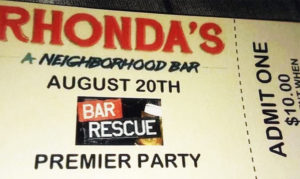 Jon is an absolute saint, although television might portray him otherwise. While he was initially worried about fixing the building and fixing Rhonda, he hoped to fix Rhonda by fixing the building. Rhonda is full of so much more confidence and pride, and bursts out into tears of happiness upon seeing the rescued bar. Jon went and repainted the building, installed a new sign, and made Rockin Rhonda’s into Rhonda’s – A Neighborhood Bar.

The interior has been refurbished to feel more like a real lounge, and just looks incredibly cozy. Of course, the floor and safety issues have been fixed, and new systems have been reinstalled. Bartender Jack is beyond thrilled that he can walk through the bar without the slanting floor. The simple things in life are the best, and all the staff is excited about the new ice machine. Jon also installed an Orange Door Entertainment Center, which has 50,000 songs in it. He also had special wallpaper made, including graphics on the pool table lights.

Rhonda’s – A Neighborhood Bar may be the best success story of Bar Rescue to date. Sales have doubled from their initial point, and Rhonda’s new bar is one of the highlights of Sanford, Florida. More than 300 Facebook reviews have come in for an astounding 4.3 star average review, and Google has 4.8 stars out of 5 over 77 different reviews. The only negative reviews are from regulars complaining about the slight price increases on beer, and the fact that smoking is no longer allowed inside. To this date, Rhonda’s – A Neighborhood Bar is performing well, and incredibly active on social media.