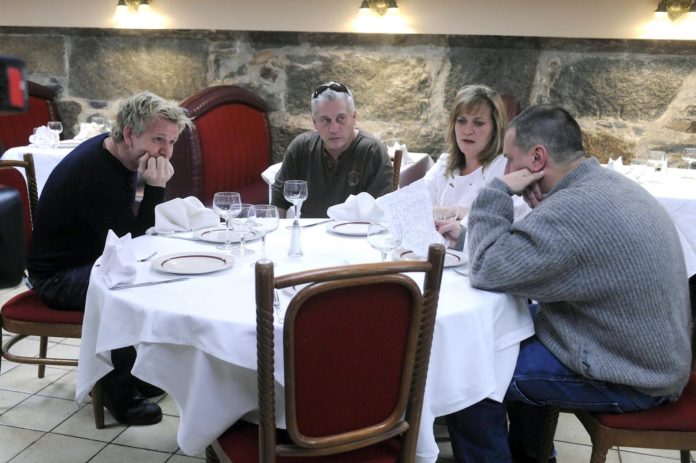 Founded in Boston, Massachusetts’ own Little Italy in 1982, Davide was one of the first real fine dining experiences one could find in the area. Some 15 years after opening, Davide was bought by brothers Frank and Anthony. Starting out, the restaurant was a massive success, but after a few years after the purchase, it turned out one of the brothers was embezzling money for drugs, which created a nasty cycle of rehab, abuse, and recovery. After Anthony comes back clean, Frank has still seemed less interested in running Davide, possibly due to family issues. As a result of these issues, there’s a debt of around $1 Million, a broken family, and perhaps a dying restaurant. Can Chef Ramsay make it in time?

On the way to Davide, Ramsay hears on the trolley that the place isn’t recommended by anyone, and most people haven’t actually been to it. As soon as Chef Ramsay shows up, he asks for a full staff meeting which includes plenty of family connections. It’s revealed that for three years the business has been slow. Anthony’s drug problems are quickly brought up, and the stress of being lied to 6 times in 13 years, and having the entire burden on Frank has likewise made his behavior and outlook a problem. It’s clear there’s a deep family divide, as the brothers blame each other, with Anthony admitting he is at least partly to blame.

After this conflict, Gordon decides to try the food. There is a promising start as the Caesar salad is made tableside, and all the plates of pasta are handmade. When Anthony is asked, he states the food Frank makes is good. This promise drops a bit as it takes 8 minutes for the salad to be made, and the salad is far too wet to actually keep the dressing which is unfortunate. Between dishes, Ramsay asks Anthony about his addiction which included Heroin, and Anthony states that he spent 4 years in jail, but is also 2 years clean, which is in all honesty quite the accomplishment and something that Ramsay praises. Next up is an eggplant dish that is far too soggy and seems frozen. This is confirmed by Frank, who admits the batch was made three weeks ago and are frozen until served. Lobster Ravioli is then up, which is manufactured (negating the homemade pasta statement) and is nasty. The waiter asks Ramsay to help convince Frank to come in early and make the pasta. Then there’s a rack of lamb with a red wine sauce, which is another failure as the crust is burned so badly it lost the flavor.

Ramsay goes into the kitchen and states Frank needs to make fresh food, otherwise the place is doomed to fail. Frank seems aloof about the subject, and later questions his future at Davide. By time Dinner service comes around, Frank seems dead in the water which is very bad as the dinner crowd is huge. The kitchen is quickly backed up with over an hour plus waits. What makes it worse is Frank has no problem sending out bad food, just to get more time to make a replacement. While observing, Ramsay isn’t nearly as mad as he is depressed, as he sees that Frank is burned out totally. Frank for his side begins to rage in the kitchen due to the complaints and literally throws in the towel only halfway into dinner service. To cover, the Sous Chef and staff try to take control and recover, but it was more trying to land a plane whose wings were on fire than running a decent restaurant. 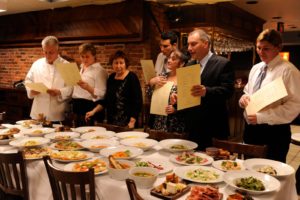 After dinner service, Ramsay shows a very compassionate side to the staff and states Frank needs to get fired up again, asking them to take some time and figure out something they haven’t said to him before. The next morning, another meeting is held with Frank present. Ramsay says he saw that stress is killing him, and it’s clear he’s in a pit. Anthony then reads a speech he prepared, stating he knows that Frank has been under a lot of stress, and Anthony is there for Frank, sorry for what he was put through, and he loves him. His wife likewise says she loves him and is beside him. She presents him with his old chef jacket, one he hasn’t worn in 4 years, perhaps out of guilt over the quality of his work. She asks him to put it back on, and he states he still doesn’t deserve it. Ramsay then takes the team into the kitchen and asks him to make something with passion, not anger. It’s a relief to see Frank take time to have attention to detail. Ramsay states his dish is amazing, and there’s still hope.

Over the next night, Ramsay’s design team renovates Davide’s appearance, making it more open and elegant. The whole family, including Frank, is blown away. Afterwards, his wife convinces Frank to put the chef’s jacket back on, and to him, it’s a statement that he’s taking responsibility for the dishes he puts out. Speaking of dishes, a new menu is put out, which is a modern take on Italian food, including plenty of homemade pasta and Frank’s own lemon chicken recipe. Right before the relaunch, Frank is taken aside to talk about Anthony. He states that his own brother was an addict, and he wished his brother could be recovered for two years like Anthony, and while he is not perfect, something needs to change. This brings Frank to tears, but also gives him more drive. As an added bit of fire, it turns out Boston Magazine will be coming in for a review.

Luckily, both the Boston Magazine writers and the other customers are loving the appetizers offered. This is dampened by a bit of pressure between brothers and serving speeds. Unfortunately, under that pressure, Frank undercooked part of a pork dish, which makes everyone’s hair stand on end. Ramsay jumps beside Frank to keep him from dropping back into old habits and keep him driven. The second attempt comes out perfect, and the writers are excited about the potential of Davide. After dinner, the staff meeting is joyous. Frank proves he can run a kitchen and the team can come together to bring success. Ramsay tells Frank to keep that chef jacket on, keep the passion, and the family, on the whole, seems to be a lot more cohesive by the end of the episode. Let’s see what happened to Davide after Kitchen Nightmares. 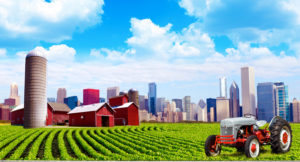 Sadly for anyone who wanted to visit Davide, the restaurant has been closed since 2014. This is despite the fact that in a “Revisited” episode, things appeared to be going quite well for Davide. In terms of Yelp, reviews were lukewarm at only 85 (better than some restaurants, but not fantastic) and on an average of 2.5 stars. It appears that after Davide closed down, the brothers have been working on an agricultural venture, though there are no clear signs of progress going on it at this time.