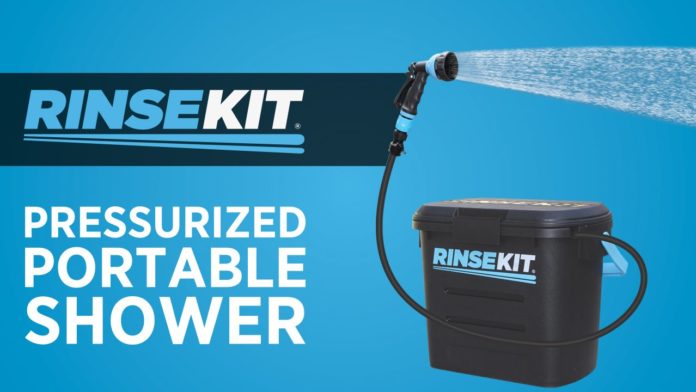 Stepping into the Shark Tank are two entrepreneurs with a business that promises to offer a way to clean up when you’re on the go. Enter Chris Crawford and Eric Fegan, two surfers from California. Their company is RinseKit and they have come seeking a $250,000 investment in exchange for 5% in their company. Chris starts off – what if he told the Sharks that they have a product that everyone could use, but nobody knew existed yet? The RinseKit is the ultimate portable shower system and revolutionizes the way you go outside and have fun.

The RinseKit comes with a little adapter to attach to the house bib. The nozzle is on a quick neck, so all you have to do is unattach it, plug it in and reattach it to a bib outside your house, and the water pressure transfers into the RinseKit. There, it compresses the air and reaches a level of 65 PSI. This whole process takes about two minutes and yields around two gallons of water. After that, disconnect your RinseKit, attach the nozzle, and now you’re getting the same pressure that you get from your garden hose.

Chris demonstrates by spraying into his hand and mentions that the shower setting will spray for a little over five minutes. On the mist setting, it can go for 30 to 45 minutes. The top of the RinseKit comes off so you can stand in it and shower off, then step right into your flip-flops on the beach. The two have tried to think of every little bell and whistle that makes RinseKit the ultimate portable shower when you’re going to go outside. This includes activities like beach visits, camping, fishing, hunting, anything else.

Robert starts by asking Chris and Eric what they think the number one reason that people will buy the RinseKit for. The reason Chris invented it was for surfing. He would get in his car and be all salty and sandy, and then he would gunk his car up. After the RinseKit was invented, they began to discover more and more uses beyond just the application of rinsing off after surfing. If you’re going to go camping, being able to rinse off dishes on the spot and even rinse your kids is huge. Robert also asks about Chris’s background, and he explains that he used to own his own pool business.

In the pool business, Chris started to understand more about hydraulics and plumbing and electrical and engineering. Lori asks about Eric, and Eric is mostly involved in the sales and operation of the business. His background is in running global sales and operations for companies. Robert asks about the equity situation, and Eric confirms that both he and Chris have equity. However, Eric has a few partners that have also invested into RinseKit.

Robert continues to construct a financial picture and asks about the funding and start-up of RinseKit. Chris sold his entire pool company and put all his money into RinseKit. He sold the company for $75,000, funded himself so he could continue living, and then he talked to one of his clients. One of his clients offered to help and bought a 10% stake in exchange for $75,000. From there, RinseKit began to gain traction. Kevin then asks how long ago this was, and all of the investors got in three years ago. 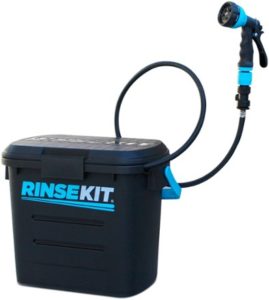 Daymond asks about the debt situation, and they are currently $550,000 in debt. All of the Sharks give audible reactions, as this was clearly not an answer that they were expecting. Robert asks what percent Chris owns of the company, which is about 60%. Eric and his company own 10% of the business. So far, the sales of RinseKit are just under $800,000 in the entire lifetime. Each RinseKit sells for $89.99 at retail and they sell wholesale units to interested retailers for $45. Their overhead margin is 60%, meaning they’re walking away with about $20 in revenue for each RinseKit sold. Kevin asks how many they will make in this calendar year, and Eric forecasts sales of 2.1 to 2.3 million. This will produce about 5% in profit with their debt, which means a total yield of $100,000.

Mark asks why the profit is so low since with a margin of 40% they should be making more money. Eric explains that a lot of money is going into heavy marketing since they really want to put their flag in the ground. Mark asks for specifics, and Eric continues; they spend about 10% of their gross revenue on marketing. Daymond poses an interesting question – since Eric’s company owns 10%, are they making any sales commissions? They are, Eric confirms. The commission varies depending on the discount from the accounts receivable and ranges from 5 to 10%.

The big question, Mark asks, is what their next two years will yield. In the next year, their gross revenue margin will increase by a single digit percentage, but it should increase in two years by a percentage in the teens. This is a $4 million year. Eric continues, saying that their advertising and marketing has a cap that will end at 5% of total gross revenue. On a $5 million model, they could make about $400,000 and some odd change. This means $300,000 after tax. They are basically asking them to evaluate their company at 18 times two years of sales from now, Kevin points out. This basically means that they are vastly overvaluing their company.

Kevin continues on, as he has another question. The RinseKit is very expensive. Mark speaks up, saying that he thinks it’s a brilliant product since it fills a specific need, but there are certain outlets that their core customer is missing. They don’t match with Mark’s businesses, historically, since Mark is a tech guy. He is the first Shark out of the tank. Kevin continues on, saying he is struggling with the evaluation. He will have to wait years to get his money back, but Chris says that this is based on a company buying the company out. Kevin points out that a buyout is his only hope for an exit from his investor position. He offers $250,000 in exchange for 5%, and they have to grow the business exponentially before he can ever get paid back.

Kevin is realistic, and he says that it’s reasonable that RinseKit gets to $10 million. They’ve proven it and have retailers that want to do it. They can make $800,000 pre-tax, so after tax, they’re looking at $600,000. He owns 5%, so he only makes $30,000 three years from now on his $250,000 investment. This is assuming that everything goes right. Chris points out that for a $20 million purchase, Kevin would be walking away with a million dollars. Lori speaks up, asking how they know that they’re selling a company for that $20 million. Chris explains that they are building the category of retail that retailers have never had before allows the business to make money. They create an ecosystem that allows them to add other products. 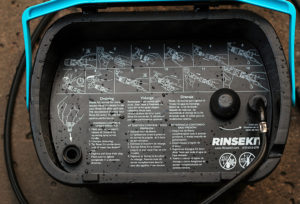 So far, they have done quite a bit with the RinseKit – they introduced a modular lid that allows people to put their dishes on it. They also have heaters, fuel fill kits, and shower pools. When they built the forecast models for the business, they did not include any big box retailers. Robert says that he likes the product and thinks it’s great. As a fellow surfer, he sees the need and can see the need for kids. The only part he didn’t like is that it’s always dangerous to build a company that has to have an exit. That is the fundamental problem with the deal – at 5%, if it sells, Robert is good to go. If it doesn’t, Eric makes sales agency commission, but Robert gets nothing. However, he extends an offer of $250,000 so he wants 20% since he does not receive a commission.

Kevin says that he does not think the offer is unreasonable, as he estimates an evaluation of $2 million right now. With no exit, he doesn’t want to wait 8 years to get his money back. He extends an offer of $250,000 in a loan form since they have $500,000 in debt. He wants 5% equity for taking the risk. With two offers on the table, Daymond urges them to take action. Lori speaks up again and says that she would like to make an offer. Her offer is $250,000 as debt for 5%, but she wants the same royalties that Eric is bringing. She is asking for more than Kevin did.

Robert points out that he is not a loan shark type of guy, but an equity type of guy. There is a lot of noise but he has the only equity deal. So, he offers $350,000 for 20%, an increase of $100,000. Eric says that he does not want to see Chris dilute his share below 50%. Kevin urges them to make a decision quickly with three offers on the table.

To make things more chaotic, Daymond offers $250,000 in exchange for 7.5% equity. However, he wants a sales commission for several of the companies that he brings RinseKit into. In the end, Eric and Chris from RinseKit agree to take Daymond’s offer. In fact, they act with no hesitation, and just like that, Daymond is an investor of RinseKit.

With Daymond’s investment in the business, RinseKit has really taken off. Unfortunately, the product seems to be oriented at different markets to the extreme. For example, there is no retailer between California’s eastern border and Salt Lake City that does not sell the RinseKit. With that kept in mind, the RinseKit can be found at more than 75 different retailers (more than 600 stores), although there is an online marketplace available. They also ship internationally to more than 15 different countries.

The RinseKit still sells for $89.99 whether you purchase it from a retailer or directly online. Many new attachments have been introduced for the RinseKit, including the “hot rod water heater” and the “heater adventure bundle.” They have also developed a kit for people who live in apartments or condos since those residents typically do not have access to a hose bib from the outside of their house. RinseKit also runs holiday sales, which at the time of writing, have reduced the price down from $89.99 to $79.99. Several attachments and bundles are also on sale for a discounted price.