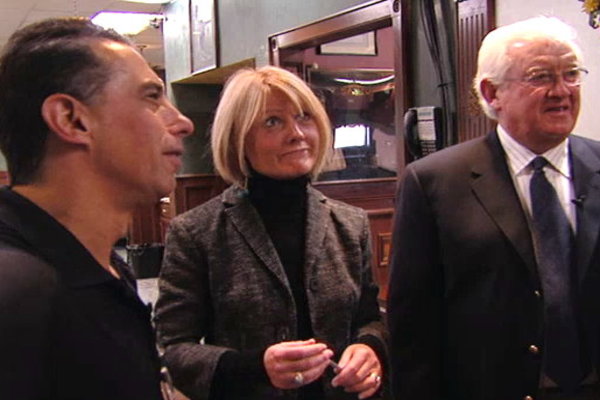 Based in Carlstadt, New Jersey and founded by Mitch, his wife Maureen and his father in law, Chief, Grasshopper Also is an Irish style pub. Purchased 17 years ago, mostly with the financial backing of Chief who spent 40 years in the restaurant business, Grasshopper Also once had a great a deal of clout but in the past, nearly 2 decades has wasted away. As a result, finances have dropped significantly and the staff is often sent home early as there’s nothing to do. Can Chef Ramsay return the Luck of the Irish to this place, or is it too far gone?

Upon entering Grasshopper Also, Chef Ramsay is introduced to Chief and his daughter Maureen, as well as Mitch. Quite clearly, the two guys in the situation are prone to fighting, and Maureen works as a referee. This somewhat makes sense as Chief blames Mitch for everything that goes wrong and seeing the $3 Million invested as all but lost. After a quick talk with the owners, he then speaks with the floor manager Annette, who is blunt about how the food and how the service is. Ramsay orders the French onion soup, the shepherd’s pie, and a fisherman’s platter.

Starting off, Chief was critical of the food being sent out. With the French Onion soup, he was completely right as it looks and tastes disgusting. Chief agrees and says the kitchen staff needs to be taught how to make it. The pie then comes out, which is not a shepherd pie after all but a cottage pie which is cold and low quality. Last to come out is the fisherman’s platter which doesn’t even get a full bite in before Ramsay spits it out and says it’s inedible. Mitch is wholly shocked and Chief is feeling vindicated.

Next, we see Ramsay meeting the chefs, who not a single among them had an idea of how to make Irish food. He quickly inspects the kitchen and notices that the scallops are frozen, and the refrigerator shows nearly everything is frozen, and what isn’t frozen is old and caked in fat. There are mozzarella sticks that have poultry blood all over them, plus raw and cooked meat cross-contamination. Going into the walk-ins, he finds bubbly, slimy cutlets, and fish that looks like it was mauled by animals before making it into Grasshoppers Also. Ramsay orders the kitchen to be closed down for the night and tells the owners they need to straighten up their establishment, which makes sense given the severe health risks. The owners come together and Chief tells Mitch to get into the kitchen and get them to clean house. In private, Maureen and Mitch talk about responsibility, and Chief walks out to tell customers they are closed. Maureen then takes a leadership role and starts getting the kitchen to clean.

The next morning, Chef Ramsay visits Mitch and Maureen’s house. He sees a photo of Mitch and Maureen on their wedding day and can’t believe he’s the same man. In many ways, he’s not. It turns out Chief has been fragmenting the relationship as a result of the failures of Grasshopper Also. Ramsay and Maureen team up and start planning a turn around to help get both the business and Mitch back on track. With this settled, Ramsay has a full inspection and approves opening for dinner service the for the night. After this, Maureen tries to support Mitch, but it’s limited in effect as he’s still seeming lost. Ramsay speaks to him in private and gives him a bit of a pep talk, encouraging him to relax and find his own voice. 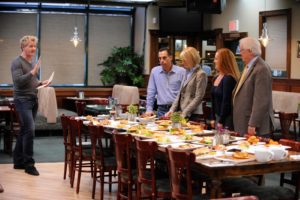 Chef Ramsay then heads back to the kitchen to make a few specialties to add to the menu including an actual shepherd’s pie and fish and chips, which makes everyone very energized. After this, he finally is able to see how Grasshopper Also functions during a full dinner service. Bad signs start appearing though when the chefs start asking if they should precook the food or somehow speed up the menu items, which would cause a massive downturn in quality. By the time the dinner service starts, word has spread about potential improvements and the restaurant is packed, which makes for plenty of people ordering the specials. The kitchen is first slow to respond, but after some forceful coercion into listening by Ramsay vis a vis orders from Mitch, the chefs seem to finally be on the same page as the owner and get to cooking as opposed to sitting around. Unfortunately, Ramsay quickly notices there’s no POS system and the tickets are handwritten which can cause issues. One of those issues is rushed presentations, which makes things look very sloppy and can cause a ruined dinner.

Luckily, when the food does make it to the table, the specials at the very least are impressive, but the regular menu continues to disappoint. Most are undercooked, underseasoned, and late. It turns out the chefs can’t manage cooking ground meat burger without making it raw in the middle, and Chief is not doing much but breathing down Mitch’s neck. Ramsay ends up snapping at the kitchen staff as within only 3 hours, there is a lot of returns and even the special items are being ruined by a lack of caring. Ramsay then leaves to make a call to a Chef James (an Irish Chef who’s worked in some of the best places in the United States), who then heads over to the Grasshopper Also. After dinner, there’s a meeting of owners and key staff to introduce James and to announce there are some major changes to be had.

By the next morning, not only has the Chef made some changes, the aesthetic of the Grasshopper Also has been greatly improved with modern lamps, Mahogany, and a much brighter lighting scheme. These improvements bring the soul back into Mitch. As an added bonus, Ramsay oversaw the installation of a Halo POS system to increase efficiency and organization. The menu for its part has been totally revamped with smaller portions but much higher quality goods that are authentically Irish in origin. The day three relaunch proves to be a hit among the customers, and Chef James is shown to be an aggressive line leader, which is just what the kitchen needed. Unfortunately, Mitch chokes up for a bit on the new system, which has caused severe backups. Chief tries to intervene, to which Maureen tries to cover and is told to shut up by Chief, which causes Ramsay to shut off the kitchen for a moment, swap James to Expedite, and for himself to take control, while Mitch makes mistakes in the front. That being said, the rest of service improves. It’s clear to Ramsay at the end that Grasshopper Also won’t win unless they swap staff, and get Mitch’s head in the game. But did it work well enough for Grasshopper Also to continue existing in 2017? Let’s take a look. 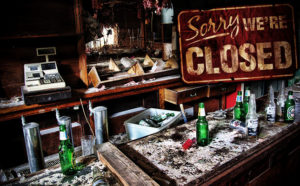 As of 2017, Grasshopper Also Bar and Restaurant is long since closed down. Opening its doors for the final time on October 14, 2012, the location where Grasshopper Also once stood is now the Eastside Ale House, as the restaurant was sold not long after the premiere of the Kitchen Nightmares episode. Amazingly, this location is closed as well, and had less and lower ratings than Grasshopper Also as well, with 9 at 2 stars as opposed to 30 at 3 stars on Yelp. At the time of writing, if you pass by this area it is likely to be just an empty bar front.