Based in Hanson, Massachusetts, the Olde Hitching Post was purchased by owner Tom to give to his daughter to run in 2005. Andrea for her part had always wanted to own her own establishment, but things went south in that department very quickly. Tom, being of the opinion that his own daughter would run the Olde Hitching Post into the ground in months has not allowed her to learn, either from experience or watching, and has made himself the defacto dish dictator. The staff for their part is well aware of the issues, including not only Tom but low-quality ingredients and family conflict. Can Ramsay get some sense into Tom before the Old Hitching Post?

Tom drives up to pick up Chef Ramsay as he wants to get his side of the story in with Ramsay before anyone else. During the car ride, Tom mentions he has owned three successful restaurants and that himself and Andrea are side-by-side owners. He claims she is not a hardworking person, nor is she built to be an owner. It appears he is losing $7,000 a week at the minimum in business. There is a very clear narrative which will be either proven or disproven within the next half hour.

Within minutes, Janice (the manager) tells Ramsay that he shouldn’t believe much that Tom says. Andrea then meets Ramsay and explains her role as much as she can. She states she can handle the stresses of restaurant ownership, but as of right now her hands are tied. Andrea very much wants to change much about the Olde Hitching Post, alongside her husband who also works in the kitchen. Tom is then brought in and it’s clear that Tom didn’t expect for the truth to be exposed. It’s revealed that Tom takes all the money from the business, and keeps finances secret.

After this tense exchange, Ramsay decides to try out the menu. He picks the Meatloaf, Lobster Ravioli, and Cranberry Haddock. Carla the waitress has some trouble lying to Ramsay when asked if the food is fresh, but Tom forces her to do so. She then comes clean when she hands the plate off, and the food is cold in the middle and store bought. Next up is the Cranberry Haddock, which in my opinion, looked like part of a messy crime scene. It’s extremely soggy, and you can see Chef Ramsay’s hands shake as he tries a bit, which turns out as bad as expected. Last up is the Grilled Meatloaf which to its credit, aside from some old looking vegetables, seems at least suitable for human consumption. It turns out though that the meatloaf is dry, no real texture to it, and it was made and frozen a long time ago. 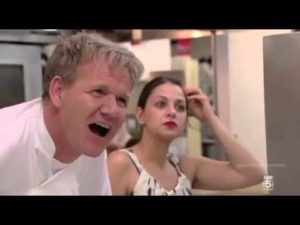 Tom has taken exception to this critique and believes Ramsay is insulting him, which needs to be dealt with. Next, Ramsay enters the kitchen to talk to the staff. He states the food is outdated and bland. Chef Dan offers no real explanation to why this is occurring but clearly understands this is the wrong way to run a kitchen. Tom, on the other hand, has no idea how to not be a fool. To prove the point, he goes to the staff and asks their opinion which is negative. After Chef Ramsay leaves, Tom gives them the third degree about these complaints and is clearly delusional.

Later that night, locals begin to pour in for dinner service and Chef Ramsay goes to the kitchen to observe dinner service. It starts off poor with the staff appearing to work as a reheating service as opposed to a dinner one. Tom tries to lie about how people love frozen food, and Ramsay takes him aside to prove a point of his own low-quality food and cowardice. He challenges Tom to then walk out to his customers and state that the food is frozen. He refuses to do so, predictably. Ramsay then takes matters into his own hands and walks table to table explaining that the food is frozen. After this, Ramsay does his customary kitchen inspection. Tom gets highly defensive and tries to claim his food isn’t frozen, which is hilarious. Ramsay puts him quite effectively in his place as a liar and a cheat. Andrea wholly sides with Ramsay and is embarrassed over this entire night.

After dinner service, Ramsay meets with Andrea and the two speak of Tom’s denial. Andrea states he wants the business, but by the time it’ll be passed down it’ll be long dead. The next morning, Chef Ramsay decides to hit the airwaves and ask the community about the Olde Hitching Post and gets exactly what’d be expected. Afterwards, Ramsay holds a staff and owner meeting, and he reveals that Tom’s system is a failure. He states that Tom needs to change, and Tom states he’s stuck, but does ask for help and is willing to change. This is great news, as Ramsay has quit the point to make which involved a bit of the community getting involved, namely in making meatloaf. When presented with the fresh meatloaf, everyone loves it. The lesson here is that to survive, you have to beat homemade, not just be easier than it.

Over the night, the Olde Hitching Post is renovated to look much cleaner, bluer, and with a rustic charm. This puts the entire team into a new mood and proves to Tom that changes can be good. Next up is an entire reorientation of how to prepare food and a new menu. Come relaunch night, it’s Andrea’s time to shine as a leader. At the start of service, Andrea looks like she is doing well, but needs to inspect food before it heads out. She recovers quickly and the customers for their part can taste the improvement. By the end of the night, Andrea has more than proven herself at the line and everyone seems very pleased. After dinner, Tom and Andrea talk and he hands the Olde Hitching Post over. Ramsay and Tom both have all the faith possible in Andrea, and the full after dinner meeting is absolutely wonderful, with everyone showing a real glow. With a short-term update showing that the Olde Hitching Post kept to the practices and structures given, can we assume that it is still open in 2018? Let’s take a look.

As of 2018, the Olde Hitching Post is still up and going strong. According to Yelp reviews, it’s now at around 3.5 stars, which isn’t bad and has been closing in on a 4.0 average over the past few months with 59 reviews. It does appear though the place is not without issue- though the food is great, it appears the front staff may be making people turn away at a fairly regular pace.