What Happened to Jenny McCarthy? – 2018 Update 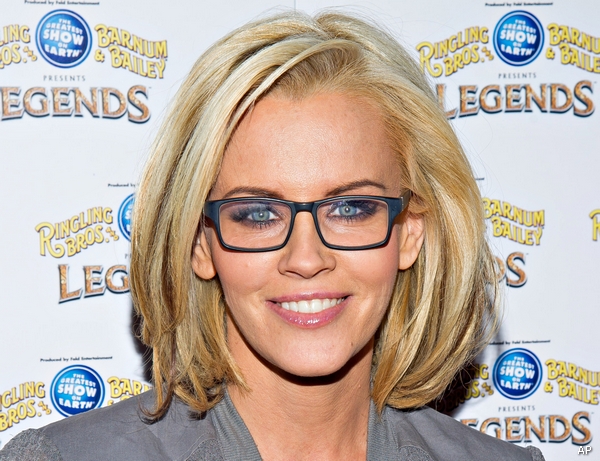 It takes a lot to make it big in the world, no matter where you come from. There’s a certain special something you need, an indescribable quality that no one can deny. Jenny McCarthy has this in spades, coming from your typical all-American family to making it big and literally becoming a household name. From modeling to acting and even writing a few books in her spare time (natch!), she’s got this celeb life thing sorted! But what’s Jenny McCarthy been up to lately? To everyone saying, “What happened to her?” she’d likely say, “I’ve been here the whole time and wait until you get a load of what I’m doing next!” 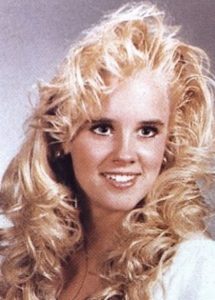 Born Jennifer Ann McCarthy on November 1, 1972, in Evergreen Park, Illinois, she grew up in the Chicago suburbs with her three sisters, Lynette, Joanne, and Amy. While her mother tended both the house and the courtroom, her father served as a foreman in a steel mill during the last heydays of the steel industry. Dan McCarthy wanted his girls to have the best chance at life and picked up a second job so he could send them to Mother McAuley Liberal Arts High School, an expensive all-girl Catholic school in Chicago. Being from “the wrong side of the tracks” wasn’t easy and Jenny shared in an interview with Dr. Drew that she was terribly bullied at school and felt “like an outcast”. After graduating, she spent two years studying at Southern Illinois University before deciding it wasn’t for her and returning home. While working in a Polish grocery store deli, something told Jenny that she was meant for more and even though several modeling agencies turned her down, that inner drive told her not to give up.

Setting her sights on the big time, Jenny went to the best in the business, Playboy Magazine and in 1993, they offered her $20,000 to be Miss October, Playmate of the Month. Chosen personally by Hugh Hefner from a pool of over 10,000 applicants, she moved into the Playboy mansion and later hit Playmate of the Year, netting a $100,000 per-year salary. Her photo-shoot emphasized her simple Catholic upbringing in a smoldering, sensual layout which won her rave reviews with the readers of Playboy but which also resulted in her family’s home being egged and the nuns at her former school lecturing her sisters on the wages of sin. They’d have to lecture a whole lot harder though, and for naught because Jenny McCarthy was about to hit the big time in a seriously big way. 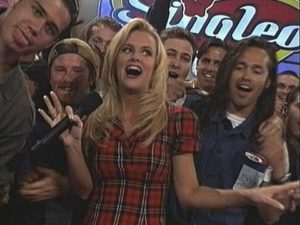 A new host of Playboy TV’s show ‘Hot Rocks’, Jenny moved to Los Angeles, the center of the entertainment world and did a stint as co-host of the popular MTV show, ‘Singled Out’. More Playboy modeling followed and Jenny’s success as a host led to acting gigs (including 1996’s The Stupids and appearances on WWF/WWE) and her own show ‘The Jenny McCarthy Show’ in 1997. It was the late 1990’s and Jenny McCarthy was fast becoming a household name. While her sitcom ‘Jenny’ was a non-starter, she found her niche in films and comedy, landing a major role in BASEketball in 1998, appearing in Scream 3 in 2000, and racking up an impressive portfolio of cameos and small parts in a wide range of comedy films and TV shows. Lovestruck, Jenny married long-time boyfriend John Asher in 1999 and gave birth to her son, Evan Joseph Asher in 2002 (though they would divorce in 2005).

‘That funny girl’ Jenny McCarthy remained with Playboy, pulling duty as a model, centerfold, and occasional ambassador of the brand, even taking a turn behind the camera as a guest celebrity photographer. Hosting was her true strength, however, and she helmed reality and documentary shows (E!’s ‘Party in the Palms’ in 2005, NBC’s ‘Love in the Wild’ in 2012, and ‘In the Motherhood’ for MSN in 2010), making a splash as a co-host for a season on the daytime talk-show ‘The View’ in 2013. Jenny was even tapped by SiriusXM radio to host her own show, ‘Dirty, Sexy, Funny with Jenny McCarthy’ in 2014. Another love entered her life in 2005, celebrated actor Jim Carey, and the two enjoyed five years together before the relationship ended in 2010 and the separated as close friends. Not content to sequester her talents in the visual arts, Jenny also authored several books about her life, her career, and parenting, a total of nine books over 15 years (including bestsellers Belly Laughs (2005), Baby Laughs (2006), and Love, Lust, and Faking It (2010)). 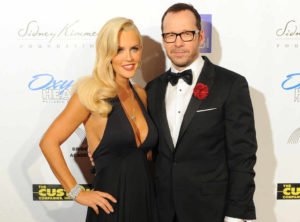 In 2013, Jenny began dating singer/songwriter/actor Donnie Wahlberg and the two married in 2014. As is the celeb custom in these contemporary times, their relationship was the subject of a reality TV show on A&E, ‘Donnie Loves Jenny’, which ran for 3 seasons. In addition, the happy couple has been a part of the long-running A&E reality TV series ‘Wahlburgers’, detailing the day-to-day running of the burger joint Donnie co-owns with his brothers Paul and Mark (aka, Marky Mark). Her dedication as an actress is rivaled only by her dedication to being a mother, as her son Evan has special needs, leading to her participation in the activist community.

What is Jenny McCarthy Doing Now in 2018? – Recent Updates 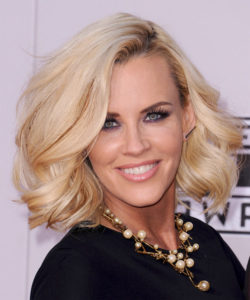 So has Jenny McCarthy retired? Far from it! Besides her on-going role in A&E’s series ‘Walhburgers’, which has been renewed for a 9th season, Jenny has co-produced and starred in the new Pop series ‘Return of the Mac’. She’ll also be joining Ryan Seacrest and Ciara in presenting 2017’s ‘Dick Clark’s New Year’s Rockin’ Eve’ and reprising her role as an on-the-spot reporter from the crowd in Times Square. No stranger to the love and adoration of fans, Jenny is also active on social media with over 1.41 million followers on Twitter and 1.1 million followers on Instagram. She’s also a follower of the clean living/clean eating lifestyle, dishing on gluten-free recipes during interviews and touting the benefits of a life well lived. Whatever her secret is, it must be amazing, because Jenny looks like she hasn’t aged a day since 1996!

As a woman who fought against the cultural norms of her heavily Catholic upbringing (see also her 2012 book, Bad Habits: Confessions of a Recovering Catholic), the scorn of an overly-prude society in the 1990’s, and every person who’s ever said a woman can’t be funny, Jenny McCarthy is a trailblazer. Modelling and setting her sights on working for Playboy, never letting public discourse faze her took a lot of courage. It’s not surprising that she shows that bravery still, coming out in support of fellow celebs who have experienced sexual assault and harassment by sharing her experience being sexually harassed and exploited by actor Steven Seagal in 1995. In this, Jenny has shown that she’s so much more than the centerfold, the actress, the comedienne, or the celeb; she’s the strong, powerful woman she always dreamed of being and an inspiration to her fans.

What’s on the horizon for Jenny McCarthy? The sky is the absolute limit! The 90’s darling is still going strong, proving that the certain something she has, that spark that gave her hope when she was working in a deli, is still burning bright. You can laugh at her, you can laugh with her, but as long as you’re laughing, Jenny McCarthy has done what she set out to do; entertain.