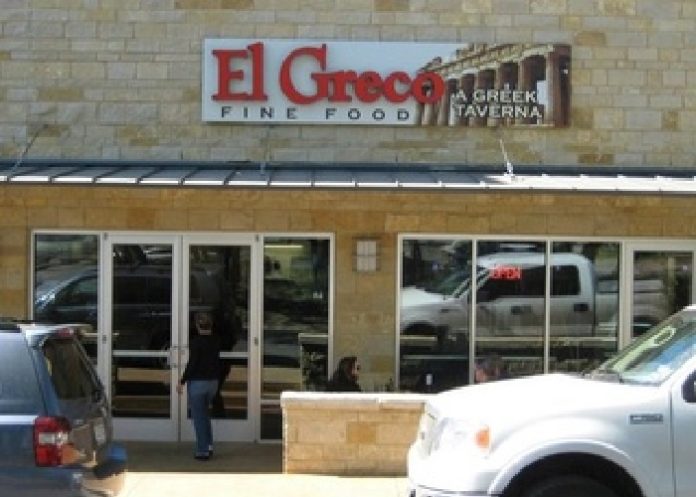 In 2011 when Gordon Ramsay visited El Greco, an authentic Greek restaurant in Austin, Texas, he found a restaurant torn apart by a Greek family tragedy. Owner Athina and her sister Kiki were constantly arguing with Athina’s son Jake, the executive chef. Jake was spending less and less time at the restaurant to avoid all the nagging, and Athina, who was not afraid of being overly dramatic, claimed that she wished she was dead.

The restaurant was packed for the first six months, and customers were leaving glowing reviews, but soon the relationship between Jake and Athina began to deteriorate, and business began to be adversely affected as a result.

Dustin the waiter felt like Jake has abandoned El Greco, and kitchen manager Anthony thought the root of all of the restaurant’s problems were the result of the tension between Athina and her son. It’s a place full of ‘bad vibes’ with low morale, and as far as Anthony was concerned, the business was ‘doomed’ unless Gordon could fix things.

Gordon begins his visit to El Greco by sitting down with Athina and Jake. He learns that Athina arrives to start prepping at six in the morning, but Jake only turns up for work half an hour before lunch service starts. There’s a moment of humor as a fly lands on the table, and Athina proceeds to show off her lightning fast reflexes by catching the fly between her hands. Gordon’s surprised she does it in front of customers, but the light-hearted moment ends there.

Jake is tired, he can’t stop yawning, and Athina tells Gordon that Jake is the problem. She states that Jake has changed and she’d rather be dead than have a son like he is now, she is losing all of her money, and now she’s losing her son too. Gordon realizes that the relationship between mother and son is seriously broken, and speaks to kitchen manager Anthony alone about Jake. Anthony tells Gordon that there are constant arguments between Athina and Jake, but that’s only during the three hours a day that Jake is actually there. Gordon asks if Jake has a busy social life, but Anthony reveals that Jake spends most of his time playing a video game, which amazes Gordon even more.

With a better understanding of the problems at El Greco, Gordon moves on to the food, but his opinion of executive chef Jake’s culinary skill isn’t too high by the end of his meal. Firstly comes the stuffed zucchini, which Jake considers to be ‘delightful’. Gordon, however, thinks it looks like ‘two grenades about to explode’, and not only that but it’s ‘bland’ and ‘disgusting’.

The lamb shank is Gordon’s next course but that falls below his expectations too. It’s ‘anemic looking’ with a depressing presentation. Unfortunately, his opinion of the taste of the lamb is even worse, as he finds it way too salty. Gordon can’t believe that the lamb was microwaved but he suspects it was. Dustin confirms that it was indeed cooked by ‘Chef Mike’, as the microwave is generally known at El Greco, he also reveals that Chef Mike does almost all of the cooking in the place.

Gordon finishes off with a classic Greek dish, moussaka, but he discovers it sticks to the plate and doesn’t consider it at all authentic. He generally compares it to dog food, and summarizes his whole meal as ‘depressing and embarrassing’. Gordon speaks to the staff after his meal and tells Jake it’s obvious he doesn’t care anymore, he asks when the moussaka was made and Athina admits it was cooked the day before, which as far as Jake is concerned is still fresh, although Gordon disagrees strongly. Jake considers his food to be ‘high-end quality’ and authentic, but Gordon once again compares it to dog food.

Word has got out that Gordon’s in town and El Greco is packed for the dinner service that evening. Gordon meets line cook Diego, who has 14 years experience in kitchens and seems very capable, but once again it’s chef Mike that’s doing almost all the work. The microwave is bleeping constantly while the gas burners sit empty. Jake insists that he’s not cooking with the microwave, only pre-heating already cooked food, and he further insists that it doesn’t compromise the quality of the cuisine, but Gordon explodes at that, and then there are far more bleeps coming from his heated exchange with Jake. Gordon observes that he’s seen a diaper look more appetizing than most of Jake’s dishes before he finally leaves the kitchen in frustration, telling Joe to take his head out of his ass as a final parting shot.

Jake promises to arrive at ten the next morning to help with the prep, but he arrives late, and Athina and Kiki begin a heated argument with him in Greek. Subtitles are provided for non-Greek speakers but they aren’t really needed, the frustrated tone of everyone involved is obvious. Jake tells Gordon that the constant nagging is why he avoids the restaurant so much, and Gordon attempts to halt the constant family feuding. He tells Athina and Kiki to back off, and Jake that he needs to arrive earlier to help with the prep, but he saves the biggest change for later that day, with the sudden exit of one of the chefs.

It’s chef Mike that gets the harsh treatment, in spectacular fashion. Gordon ceremoniously throws chef Mike out of a third-floor window, to the cheers of everyone as it’s smashed to pieces. Gordon introduces a new menu, with fresh dishes cooked to order instead of just being reheated. There’s an overnight makeover, and that evening El Greco relaunches with the new menu. At first, Jake refuses to delegate responsibility to the staff, and there are more fireworks in the kitchen as the tension rises. Eventually, Gordon speaks to Jake, he encourages him to manage the kitchen more effectively, and by the end of the night, things are running much more smoothly.

Gordon leaves El Greco with family relations greatly improved, and there’s a much more positive attitude amongst the staff, but unfortunately, it wasn’t long before that tension resurfaced dramatically, and Jake was once again the person blamed for all the problems.

El Greco Now in 2018 – The After Kitchen Nightmares Update

By the time the El Greco episode of Kitchen Nightmares first aired in January 2012, the restaurant had already hit the headlines for all the wrong reasons and had actually closed it’s doors before any of the publicity from the show could bring in more customers.

In October 2011 several staff members left after heated arguments with Jake, and one of them went to the Austin Eater, an online publication reviewing restaurants and eateries in Austin, to voice his frustrations. James Holbrook, a former bistro cook at El Gredo called Jake ‘Controlling and degrading’, and even claimed that Jake had threatened staff in the past. There were claims that Jake was having trouble dealing with Gordon Ramsay’s new menu, and that every corner possible was being cut.

There were also many people that considered Gordon’s changes at El Greco to be less than positive. Several reviews spoke glowingly of the food offered before Gordon’s visit, and considered his menu changes to be nothing but a loss to El Greco that had fixed the things that didn’t need to be mended, although most of them also praised the fact that Gordon’s visit had resulted in the ‘ridiculously’ high prices being reduced. Despite this, the Yelp reviews of the restaurant were very mixed and averaged at only two and a half stars out of five. Once again there were several reviews that spoke of the food in the best possible terms, but more than one negative review spoke about the attitude of Jake and the derogatory way he spoke to his staff in front of customers.

It’s fairly clear that Jake was under a considerable amount of stress while working at the restaurant, and it would be unrealistic to expect Gordon to be able to fix an extremely tense family relationship such as that between Jake and his mother in such a short time. Ultimately there were still many underlying problems at El Greco that would require far more than a makeover and a new menu to fix, and El Greco finally closed due to increasing financial problems in December 2011, one month before it appeared on the show.