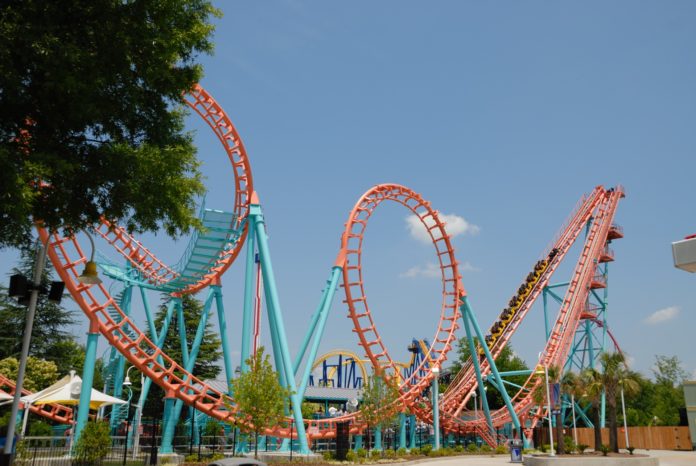 With the summer coming up, now is a better time than ever to begin planning a trip to one of the United States’s famous amusement parks! Amusement parks are a prevalent part of Americana, and many thrillseekers make it a point to perform a pilgrimage to certain amusement parks solely for the rides and activities within. So… what are some of the fastest and scariest roller coasters out there?

This list is compiled of the top ten fastest roller coasters in the world, beginning with the tenth highest and working our way to the fastest. These parks are not all located within the immediate United States, and may not be accessible to your average thrillseeker, but the parks contained within include King’s Dominion Park (Virginia), Canada’s Wonderland (Ontario), Cedar Point (Ohio), Nagashima Resort/Spa Land (Kuwana, Mie Prefecture), and oddly enough, the Nurburgring Sports Complex. 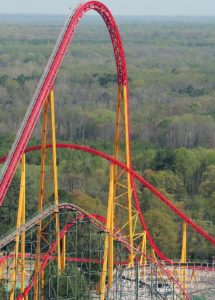 The second-ever Giga coaster opened to the United States, the Intimidator 305 is a behemoth of a roller coaster. This roller coaster features a ride length that lasts at 3 minutes, and it’s capable of putting out more than 1,350 riders per hour. With a height of 305 feet and a drop of 300 feet, this roller coaster clocks in at the tenth fastest. It reaches approximately 90 miles per hour, or 140 kilometers per hour, over its 5,100 feet track. Passengers will undergo an acceleration of 4.5 G-forces. However, riders must be at least 54 inches tall, or 137 centimeters for our friends on the metric system. Compared to a lot of the coasters on this list the ride isn’t overly scary, and is mostly safe for the entire family.

The Intimidator 305 is located at the King’s Dominion amusement park, located in Doswell, Virginia. This roller coaster cost approximately $25 million to produce, and took a little under two year sto produce. The park has consistently placed in the top 20 places for the Golden Ticket Awards in the Best Steel Roller Coaster Category. 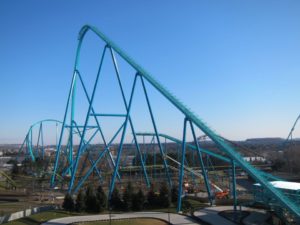 The Leviathan is another steel roller coaster, hailing from the Medieval Faire section of Canada’s Wonderland. The park is located in Vaughan, Ontario. Riders undergo an acceleration of 4.5 G-force during the ride’s 3 minute and 28 second duration, and accelerate up to a speed of 92 miles per hour (148 kilometers per hour). The total height and drop both reach a height of 306 feet (93 meters). The ride is capable of putting out more than 1,650 riders per hour.

The Leviathan was built in May 2012, and cost the equivalent of USD $28 million to build. It was the sixteenth roller coaster to be built in Canada’s wonderland, and is ranked as the eighth tallest roller coaster in the world. It is the most popular ride at Canada’s Wonderland, and placed sixth in the Golden Ticket Awards’s Top Steel Roller Coaster category. 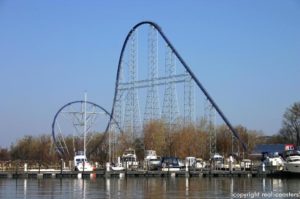 My personal roller coaster of choice, this was a roller coaster that changed the world. Built in the old days of 2000 in the common era, the Millennium Force truly lived up to its name. During its soft opening in May of 2000, it set more than six world records and defined the giga coaster category with its peak height of 310 feet. The Millennium Force was voted as the best steel roller coaster ten times by the Golden Ticket Awards, and it has ever since made Cedar Fair’s Cedar Point (based out of Sandusky, Ohio) a pioneer in roller coaster innovations.

The Millennium Force accelerates up to 4.5 G’s, and is capable of handling more than 1,300 riders per hour. Its total track length is 6,595 feet, but riders will only have 2 minutes and 20 seconds to experience the thrill. It features an 80 degree vertical drop, which truly makes you feel like you’re about to faceplant on the road that runs alongside the roller coaster. This is the eight fastest roller coaster, taking riders up to 93 miles per hour. 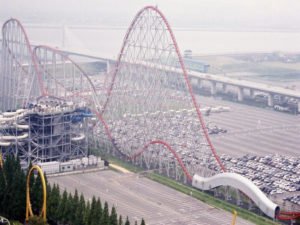 Humble but fierce in nature, the Steel Dragon 2000 is based out of the Nagashima Spa Land amusement park in the Mie Prefecture of Japan. It was built and opened in August of 2000, and features a maximum speed of 95 miles per hour (or 153 kilometers per hour). Riders are taken up to a height of 318 feet, but only dropping them 297 feet, thus setting it just shy of classifying as a giga coaster.

Riders have four minutes to enjoy the ride over 8,133 feet of track. Unfortunately, the ride was closed for three years starting in 2003 when a sheared axle caused one of the trains’ wheel mechanisms ot break. A man was swimming in the pool in a water park, and suffered a serious back injury when he was hit with the foot-long wheel. The ride reopened in 2006, and this may be an explanation as to why the ride is absent from the Golden Ticket Awards. 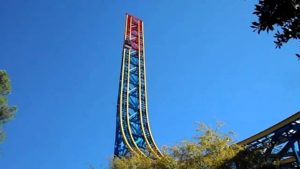 If you head to Six Flags Magic Mountain in Valencia, California you need to check out Superman: Escape from Krypton (also formerly known as Superman: The Escape.) The ride first started blowing minds in 1997, and features the highest speed of 100 miles per hour (a title that it held for several years). The ride features two separate, “dueling” shuttles that race down the track. Riders fall in a drop of 328 feet from 415 feet up, reaching 104 miles per hour or 167.4 kilometers per hour. This is all at a 90 degree angle, which slowly turns out and causes the carts to decelerate.

The Superman: Escape from Krypton, one of the world’s scariest roller coasters, was opened in March 1997. The ride broke numerous records, and even underwent a closing period for refurbishment. It has been consistently voted in the top 20 of the Golden Ticket Awards category for Best Steel Roller Coaster. 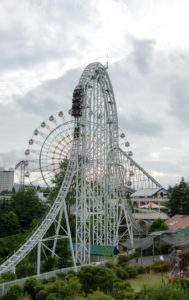 Do-Dodonapa, formerly known as just Dodonpa, is a roller coaster hailing from Fujiyoshida in Japan. The ride is much more different than any other roller coaster on this list, as it uses compressed air to launch its riders. Opened in November of 2001, the Dodonpa roller coaster features an impressive acceleration of zero to 112 miles per hour in only 1.56 seconds, or 180 kilometers per hour. Despite this, the Dodonpa is an incredibly short ride, clocking in at only 55 seconds in length for its 4,081 foot track. You’ll feel this one in your bones as it generates G-forces of over 4.25, and riders must be 4 foot 3 inches to ride (or 130 centimeters).

This lightning fast roller coaster held the record of the world’s fastest roller coaster until the Top Thrill Dragster took that title in May of 2003. This ride is absolutely rich in Japanese flavor and history – riders will hear taiko drums, which are a traditional Japanese drum that was used to demonstrate power. The drums were used in times of warfare, so it only seems fitting. The designers also included a false start feature, which has a small chance of triggering. Riders experience a “failed’ launch, followed by alarm bells, and then are launched off at 108 miles per hour. The ride was closed and just recently reopened, with more than 150 feet of track added. 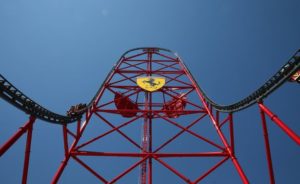 The Red Force is a steel roller coaster, found in the PortAventura resort located in Salou and Vila-Seca of Spain. It is a main part of the Ferrari Land expansion for theme park. It currently holds the record for the fastest and tallest giga roller coaster in Europe. The ride is painted a glossy, traditional Ferrari red. Riders are launched to a top speed of 111.9 miles per hour, but the ride is so smooth that they only experience 1.3 G-force. The ride goes up to 367.3 feet with a drop of 362 feet.

This ride was opened in April 7 of 2017, so not even a full year has passed yet. There is some cutting-edge technology at work for the Red Force, as the ride is infrequently closed due to a computer error. However, the ride has so much flavor of a Formula One pit stop, and this roller coaster may have beaten the Top Thrill Dragster at its own game. 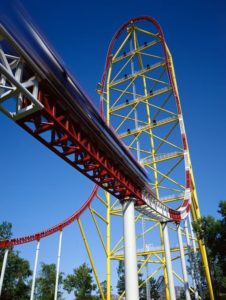 There have been three incidents with the Top Thrill Dragster, which makes it an even scarier roller coaster to ride. In 2004, four people were struck by flying debris which was caused by a metal cable frayed during launch. In 2016, two people were injured when the launch cable detached from the ride. In 2017, nobody was injured, but photos surfaced of the launch side of the track that caused it to close for the rest of the season. With that said, the Top Thrill Dragster is one of the only roller coasters to have a minimum height, which is 78 inches tall. In addition, they may not ride if they have a history of recent surgery, heart trouble or high blood pressure, or neck or back trouble. This is because the ride can sometimes fail to clear the lone hill, which causes the train to be re-launched with a higher acceleration. 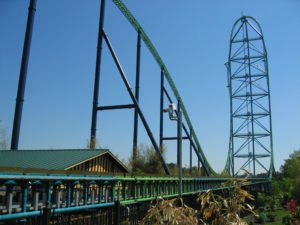 The Kingda Ka is a pioneer in the steel roller coaster segment. Found in Jackson NJ (Six Flags Great Adventure) it’s come in on our list as the 2nd fastest. It’s good at being #2, it was also the second strata coaster ever built. The ride was opened in 2005 after more than two years of construction. Riders undergo a drop of more than 415 feet to reach a speed of 128 miles per hour, for an unrivaled acceleration of 5 G-force. The riders also only have 28 seconds to enjoy the track’s 3,118 foot, or 950 meter, length.

The Kingda Ka is nearly identical to the Top Thrill Dragster, although it is faster and taller. This ride held the title of world’s fastest roller coaster until 2010 (7 years), when the Formula Rossa would eventually open at Ferrari World. Despite its renowned status, the ride has been plagued with issues which make it all the scarier to ride. This includes damage from Hurricane Irene, bird ammunition (a boy was literally struck by a bird during the lift), bolt failure, and lightning strikes. It has continued to recede in the Golden Ticket Awards category for Best Steel Roller Coaster.

The world’s fastest and newest roller coaster can be found at the Ferrari World amusement park in Abu Dhabi, of the United Arab Emirates. This ride reaches a top speed of 150 miles per hour, but only takes riders up to a height of 52 meters (171 feet) to drop down 51.5 meters (169 feet). The ride is 6,790 feet long, and only lasts for one minute and 32 seconds. Riders experience an acceleration of 1.7 G-force. This roller coaster actually is faster than the best commercially-available supercar.