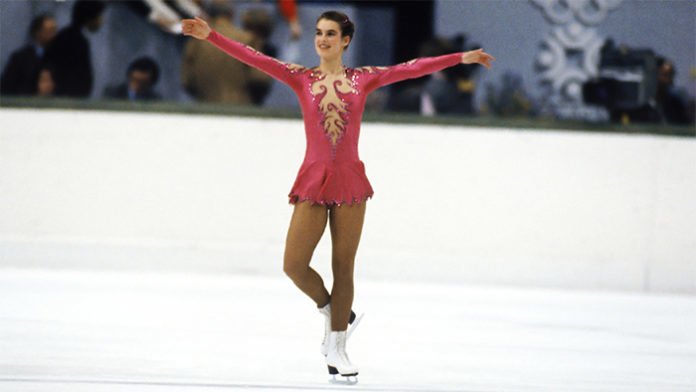 A two-time Olympian, Katarina Witt had represented Germany at the 1984 and 1988 Winter Games. A two-time gold medalist, she had also won six European titles and four World titles during her career. After a successful skating career, she retired from the sport in 1994.

Since retiring she has made a few appearances on television and film; for instance, she had served as one of the judges on the UK reality competition, Dancing on Ice. In the past, she had also made a brief appearance in the movie, Jerry Maguire. In fact, her portrayal in the film, Carmen on Ice, had earned her a Primetime Emmy Award in 1990.

What is the retired figure skater up to nowadays? How well off is the 52-year-old? From what we can gather, Katarina Witt’s current net worth is around $9 million. How did this fortune of hers come to be? Where did most of it come from? We’ll be exploring these questions down below.

How did Katarina Witt Make Her Money & Wealth?

Born on December 3, 1965, in Staaken, East Germany, Katarina Witt grew up just outside of West Berlin. Introduced to skating at the age of five, it didn’t take long for her to master an impressive skill set on the ice. In fact, within a few years of taking up the sport, she had garnered the attention of East German sports officials, who invited her into their special training program. Coached by Jutta Muller, a world-class figure skating coach, her skills only continued to evolve with time.

A few years later, she won a gold medal at her first major competition- the East German National Championships. From there, she eventually made it to the 1984 Winter Olympics in Yugoslavia. Despite the fact that she did not have a world title, she was a favorite among audiences. Though her short program was slightly disappointing, she later managed a come back with her free skate; in the end, she won a gold medal in the ladies’ singles event.

Four years later, she competed at the Olympics for a second time at the 1988 Winter Games held in Alberta, Canada. Skating to the soundtrack of Carmen, she successfully defended her Olympic title on the ice.

Following that, she retired from amateur skating. Two years later in 1990, she played the protagonist of a TV movie titled, Carmen on Ice, which went on to win her a Primetime Emmy Award. That same year, she also worked with Brian Boitano on an ice show, which saw her traveling and performing across the United States.

In the recent years, she has also appeared in a few German television programs such as Otto: Geboren um zu blodeln, Der Meisterfalscher – Ein Fall fur Beltracchi, and Klein gene Grob. In 2012, she also served as one of the judges on the UK reality competition series, Dancing on Ice.

As far as we can tell, Katarina Witt is currently single and not in a relationship.

Does Katarina Witt Have Any Children?

No, Katarina Witt does not have any children as far as we know

Did Katarina Witt Go to College?

As far as we can tell, Katarina Witt has not attended college.

What is Katarina Witt Famous For?

As a figure skater, Katarina Witt is perhaps best known for her two Olympic gold medals at the 1984 and 1988 Winter Olympic Games. In addition to her accomplishments at the Olympics, she’s also a four-time World Champion.

Katarina Witt currently lives in Germany. Photos of her house are not available.

What Kind of Vehicle Does Katarina Witt Drive?

How Much Money Did Katarina Witt Make Last Year?

Information on Katarina Witt’s annual earnings for 2017 is not available.

In the recent years, Katarina Witt has not made much media appearances. With that said, she did appear on a German TV show titled, Klein gengken Grob – Das ungalubliche Duell last year. As far as acting goes, her last role was in that of the 2013 TV movie, Der Feind in mine Leben.

Want to follow the former Olympian on social media? You’ll be happy to know that Katarina Witt is active on a few platforms- for instance, you can find him on Twitter at @Katarina_Witt or on Instagram at @Katarinawitt. On Facebook, she also has an official fan page which you can visit here.