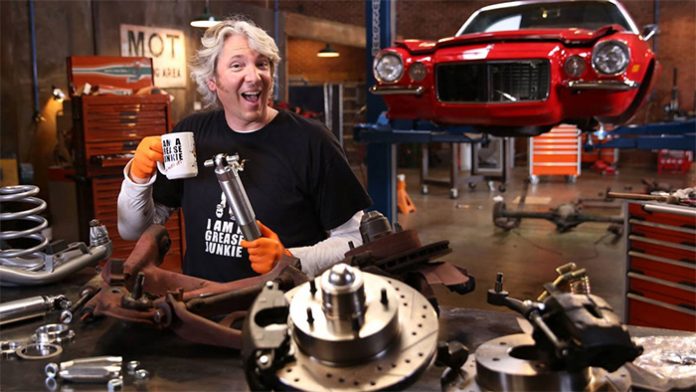 A television personality, Edd China is best known for presenting Discovery Channel’s reality series, Wheeler Dealers. A mechanic and motor specialist, he starred on the show for thirteen seasons, before departing in 2017. What has he been up to since then? What are some of his current projects? Let’s find out.

If you’re a fan of the mechanic, you probably know him from the television show, Wheeler Dealers. Premiered in 2003, China had made his debut in the first season, as the programme’s mechanic. The brainchild of Michael Wood and Daniel Album, the series follows the cast members as they save and repair old vehicles, which they later sell to new owners.

Incredibly popular, the British TV series is currently still on the air; as of 2017, it is currently in its fourteenth season. With that said, China only served as the programme’s mechanic for the first thirteen seasons. On March 21, 2017, he made a statement on his YouTube channel that he would be leaving Wheeler Dealers as a result of arguments regarding the show’s future.

A shock for fans, who had grown used to his presence on the show, it was later announced that he would be replaced by Ant Anstead in season fourteen. According to his IMDb page, China has made many television appearances since. In fact, Wheeler Dealers had been the only TV project that he was involved in the past few years.

Aside from his TV career (which has recently ended, it would appear), he also owns a servicing garage in Berkshire. Previously called Grease Junkie, it had closed down briefly in 2016 due to his work in the United States; last year, it re-opened as Motest.

Though he’s no longer working on television, you can still watch him on YouTube- that’s right, he runs his own channel (as mentioned previously), which he updates on a regular basis. Created in 2010, he has since posted numerous videos to his page, from simple vlogs to tutorials. As of April 2018, he has accumulated close to 300,000 subscribers, with over 11.4 million lifetime views. As you can probably expect, his most popular video is Edd China on Leaving Wheeler Dealers, in which he details his leave from the reality series.

Born on May 9, 1971, in London, England, Edd China has been fond of all things mechanical since he was a young boy. After completing his high school education in Surrey, he pursued an engineering degree at London South Bank University. During his time there, he built the Casual Lofa- that is, a driving sofa capable of going 140km/h, for which he received his first Guinness World Record (i.e. Fastest Furniture) in 1998.

Following the success of the sofa, he made several television appearances on shows such as Top Gear Live, Scrapheap Challenge, and The Big Breakfast. At one point, he even worked as a special effects technician on the sitcom, Father Ted.

In 2003, he received a breakthrough after landing a role on the British television series, Wheeler Dealers. Not only did he serve as the programme’s mechanic, but he also co-presented the show with Mike Brewer. Produced for the Discovery Channel in his native UK, it premiered on October 7th, 2003.

Over the next fourteen years, he gained himself a considerable fan base on the show. Unfortunately, due to alleged disagreements about the program, China eventually departed Wheeler Dealers in 2017; his last appearance saw him working on a 1916 Cadillac Type 53 V8. Since his leave, Ant Anstead has taken over as the show’s mechanic.

In the months since he hasn’t made any television appearances. With that said, fans can still catch him on YouTube, where he runs his own channel. In fact, it was on this very channel that he detailed his leave from Wheeler Dealers as mentioned earlier. You can visit his official YouTube channel here.

Since his “Casual Sofa” in 1998, he had received several additional Guinness World Records; to be more specific, he currently holds five world records- these include the fastest office, mobile bed, toilet, garden shed, and motorized shopping trolley. In 2007, he also held a record for the fastest furniture (140km/h), though it has since been broken by Perry Watkins.

By the time he left Wheeler Dealers in early 2017, he had appeared in well over 100 episodes. To this day, it remains to be his most prominent TV credit. For now, it’s unclear whether or not China will be returning to television in the near future.