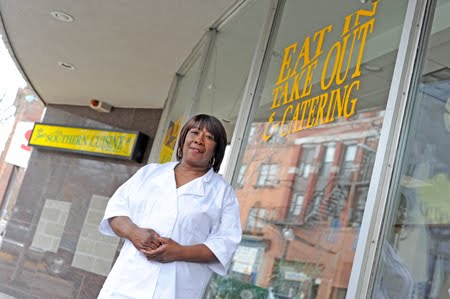 Wilkinsburg, Pennsylvania is located just outside of Pittsburgh. Located in Wilkinsburg is Ms. Jean’s Southern Cuisine, which is owned and operated by Jean Gould, a retired special education teacher. She loves to cook and then when she started doing it at her church, everyone wanted her to make food. They’re the ones who really encouraged her to open up a restaurant. Ms. Jean is the type of person who will help you if you feel bad or you need something, according to prep cook Sharneil.

However, she also has an attitude problem. She frequently yells at her employees about minor things, and is like Dr. Jekyll and Mr. Hyde, according to line cook Mike. She is mean because she feels that a lot of her staff is lazy, and she doesn’t think it it because she knows it. Jean has to tell them four or five times to do things. When she’s dealing with a customer complain, she can be known to get a little bit nasty.

Sometimes, she finds herself in the kitchen cooking and she has to stop to go to the door. There are no customers to be found at times. Ms. Jean can’t hide the times that she cries in the restaurant, and she knows that she needs help. She needs to pay back so much money and is in tons of debt. However, she doesn’t know where to go or what to do if something came up. She put up her whole life savings and the entire thing is going down the drain in front of her. She just doesn’t know what to do, but fortunately, Gordon Ramsay has come to help Ms. Jean’s Southern Cuisine.

Ms. Jean pulls up to pick up Gordon, and he is blown away. She brought a peach cobbler for him to snack on. The two enter the hotel Gordon was staying at and he asks some basic questions. She has had the restaurant about twelve years and before the business, she taught disabled kids and adults for 25 years. It’s a very tough job, and adapting from that role was even tougher. Gordon then asks how she would rank their food on a scale of one to ten, and she ranks it about an eight. 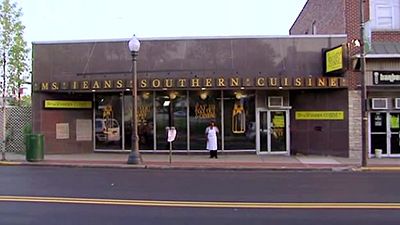 The biggest problem is her staff, however. They’re trying to cook with one hand and be on the cell phone with the other hand. They take too many breaks, gossip, and are late or just don’t show up. The staff is not contributing to keeping her restaurant up. She can’t keep enough clientele in the restaurant, and she doesn’t know if she can make it through the end of the month. Every day, she performs every role because that’s how bad things are.

Gordon appreciates the update prior to arriving at the restaurant, but now the precedent has been set. Jean grows emotional but Gordon promises that the first thing he will do is have a meeting with the staff. On the drive over to Ms. Jean’s Southern Cuisine, rain begins to pour down to set the atmosphere. Gordon enters the restaurant and is surprised by what exactly he’s gotten himself into.
The staff hastily drops their cigarettes in the back and the chef throws the food he was snacking on. The restaurant is very run down and the dessert display is completely empty. The colors of the floor, counters, and wall are all dreary dull colors, and even the staff admits that it looks like a prison cafeteria. Frankly, it’s just embarrassing. Chef Ramsay jokes, “when was the robbery?”

The dining room does not fare much better. About ten tables sit on the floor, and maybe six to eight booths line the walls. Overall, the place can’t seat more than 30 or 40 people. Gordon meets Marissa, Ms. Jean’s Southern Cuisine’s manager, and asks her to fetch the staff for a meeting without Ms. Jean present. Everyone finally assembles and introductions are made.

Sharneil, the prep cook, is ready to discuss everything that’s wrong. Gordon starts by saying that Ms. Jean came to see him this morning and that her biggest problem is the staff. She is doing this to get all the blame off of her, the staff says. Her attitude problem frequently escalates problems, and she’s just mean. She’s mean to the customers and employees both, but Gordon doesn’t believe it. Frankly, she has a split personality.

Gordon fetches Ms. Jean, who has been listening on the other side. Gordon sits her down with the staff and explains the conflicting points of view. Who’s right, and who’s wrong? The staff picks on Ms. Jean when she asks them to do something that they don’t want to do. She thinks she’s too soft and needs to put her foot down and if you do something wrong, you need to be terminated. But no, she gives everybody a second chance. 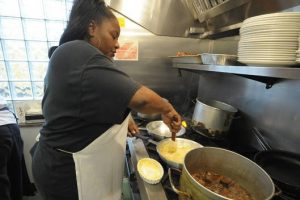 Gordon leaves for the day, despite causing a major rift between Ms. Jean and her staff. He returns the next day and skims the menu, and almost every item he asks to order is out of stock. The waitress doesn’t even think that they have gravy. So, Gordon orders the pork chops, ribs, and mac and cheese. The kitchen begins to prepare the meal while Gordon takes a sip of his sweet tea, but it tastes like sugar syrup. He switches to water. Ms. Jean complains that it’s supposed to be sweet, that’s why they call it sweet tea.

Gordon notices an exercise bike down the hallway with the bathrooms and is baffled for a moment. Of course, it’s for her when she does her exercising. He asks the staff how their food is, and the chicken sandwich came out flat like somebody sat on it. He tosses the flat bun onto a plate that one of the staff is carrying as they pass by. Ms. Jean is irate that somebody would send out a smashed bun out.

The ribs arrive with collard greens and sweet potato, but the ribs have a weird saltiness to them. He only takes one bite before sending back the ribs back. The mac and cheese is still crackling, and it sounds like Rice Krispy treats. The mac and cheese was sitting in the microwave, obviously. The pork chop floats in the kitchen inside the grease, and Gordon manages to stand it up on its side. The staff comes out to look at the pork chop, which is sitting up. Gordon obviously has his work cut out for him.

Believe it or not, Ms. Jean’s Southern Cuisine is still open! They are open some wonky hours – closed Monday through Wednesday, but then opened on Thursday and Friday from 11:30 AM to 7 PM, 9 AM to 7 PM on Saturday, and then 2 to 7 on Sunday. With that said, poor reviews continue to flood in. The food is still bad, the staff still has a poor attitude, and orders are still messed up. One review even accused Jean of drinking alcohol at a wedding reception the business catered.