How to Reheat Food in an Instant Pot 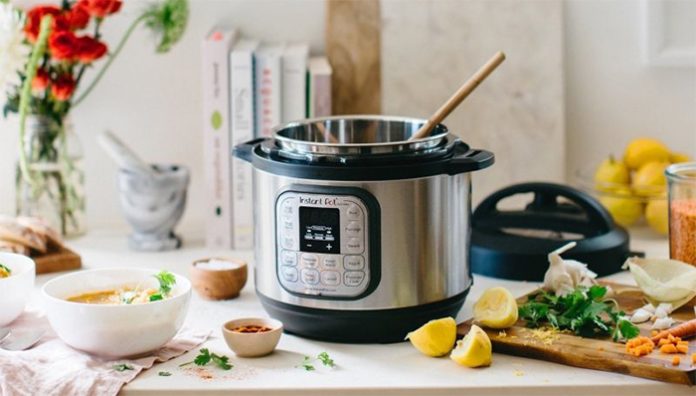 Surely, everyone’s come across the following situation- you’re left with plenty of leftovers after overestimating how much you’ll be eating during a meal. Thankfully, they can easily be reheated and eaten for your next meal. For most of us, this means popping it into the microwave for a good minute or two. As convenient as that may be, however, did you know that there are better choices when it comes to reheating food?

Reheating Food: Should You Use the Microwave?

In the recent years, there have been many claims about the microwave; for instance, many have claimed that the device “zaps the nutrients out of foods” and that it “causes cancer.” How accurate are these statements? How safe really, is it to use the microwave?

How Does a Microwave Work?

Designed to be quick and efficient, the microwave utilizes electromagnetic waves (similar to that of infrared light and radio waves) to heat up food. To be more specific, the water molecules inside the food heat up after absorbing the radiation.

Does it Kill Nutrients?

Contrary to popular beliefs, it’s unlikely that microwave cooking has a significant impact on a particular food’s nutritional value. In fact, some studies have shown that microwaving can actually help to preserve nutrients, as the process does not require water (i.e. nutrients tend to leak out of foods that are cooked in water- for example, when you boil vegetables).

The Downfalls of the Microwave

With that said, the microwave is not foolproof. In fact, it is prone to food contamination risks due to its uneven nature of heating (i.e. the food is heated from the outside in, which may cause the food to be hot on the outside and cold on the inside). To ensure proper food safety, the item must be stirred repeatedly during the re-heating process so that the middle portion reaches the proper temperature.

While that may solve the issue of having a cold center, however, it defeats the purpose of the microwave’s convenience- after all, this means that you’ll have to continually stop the device to stir the food. Aren’t there any better options?

As capable as it is, there are some things that shouldn’t be re-heated using a microwave. We’ve listed them below.

Chicken: According to some studies, reheating cold chicken alters its protein composition, which can ultimately lead to digestive issues.

Eggs: According to the FDA, you have to reheat eggs at an internal temperature of 165 degrees for it to be safe for consumption. Seeing as how most of us don’t use food thermometers with the microwave, it’s probably easier to skip microwaving eggs altogether.

Breast Milk: This one should be obvious, but breast milk should not be reheated using a microwave as the uneven heating can create “hot spots” that can injure a baby’s throat.

Processed Meats: The preservatives in processed meats can be made worse through microwaving.

Rice: Rice is commonly associated with a bacteria called the Bacillus Cereus. While cooking the grains kills the bacteria, its spores remain. Often times, these spores can multiply and cause food poisoning if the rice is microwaved and cooled to room temperature.

Leafy Vegetables: Naturally occurring nitrates in vegetables such as spinach or celery are “blasted” during the microwaving process.

Cooked Potatoes: When potatoes are cooked in aluminum foil, the botulism-causing bacteria C. Botulinum can thrive even in the heat. If the said cooked potato is then popped back into the microwave, it can cause food poisoning as the radiation is not enough to kill the bacteria.

Reheating Food: Alternatives to the Microwave

Aside from using the microwave, there are many other methods for reheating food- using the stovetop would probably be the most obvious. On this page, however, we’ll be discussing another way to reheat your leftovers- enter the Instant Pot.

What is the Instant Pot?

A brand of multi-cooker, the Instant Pot is capable of performing a number of functions- including re-heating food. For those who are wary about the microwave’s use of electromagnetic radiation, fear not- for the cooker makes use of a regular heating element. Aside from being able to warm food, the programmable gadget can also be used to steam, pressure cook, slow cook, and more.

Increasingly popular, the Instant Pot has developed somewhat of a cult following over the past couple of years. Considering all the function that it offers, however, this really isn’t all that surprising. Designed for busy individuals and families, its “delayed start” feature (i.e. you can set it so that the food will be ready when you get home) alone has led many to give it a place on their kitchen counter.

How Does the Instant Pot Reheat Food?

Unlike the microwave, which uses the same method of re-heating (i.e. electromagnetic radiation) for all types of food, you can choose between different options when it comes to the Instant Pot. After all, it comes with seven* different functions.

*The exact number of features vary from model to model

Below, let’s go over the various different methods of reheating food in an Instant Pot.

How to Reheat Food with Instant Pot: Steaming

For dishes that have a considerable amount of water content, you can reheat it by using the “Steam” function. Simply place the food that you want to re-heat into the inner pot (either in a bowl or a stacking container), close lid, turn the venting knob to “sealing” and press the “Steam” button.

As far as how long you want to steam it for, this depends on what type of food you’re reheating. For example, you’ll want to steam frozen foods for a bit longer compared to something like a leftover stew. Once the steaming is complete and the cooker has beeped, release the pressure. If the food is still not fully re-heated, simply add additional time.

Tip: Remember, steaming works the best when there is liquid present in the dish.

How to Reheat Food with Instant Pot: Slow Cook

For items such as bread, and soups, you can use the device’s “Slow Cook” feature for re-heating. To do this, place the items into the inner pot (either by itself or in a container), close the lid, and set the time for the slow cooker (as you can probably expect, this method might be a little on the slower side).

How to Reheat Food with Instant Pot: Sauté

Another option is to use the Instant Pot’s “Saute” function. For this, you want to add a couple of tablespoons of water into the pot (you may also choose to grease the pot). From there, just add the leftovers and press the “Saute” button. If necessary, close the lid.

Tip: The “Saute” function is a great way to re-heat soup- just don’t forget to stir the pot frequently!

How to Reheat Food with Instant Pot: Food Warmer

This should be a no-brainer- it only makes sense that you’d be able to reheat food using the cooker’s “Keep Warm” function. Perfect for re-heating baked dishes, especially when you want to do so slowly, simply place the leftovers inside the pot (either by itself or in a container) and press the “Keep Warm” button. From there, close the lid and wait for the dish to be re-heated.

1.) When you’re reheating food, no matter the dish, you always want to make sure that there is adequate liquid (i.e. water). For example, you’ll want to add a couple of tablespoons of water to your stew or pasta.

2.) If you’re re-heating something that tends to stick to the bottom of the pot (e.g. pasta, etc.), it’s a good idea to grease the bottom with a little bit of oil- this will make the clean-up much easier.

3.) If you’re re-heating multiple dishes at once (i.e. using stackable containers), you’ll want to place the dishes that need more cooking at the bottom. For example, rice would go on the top while frozen meats or vegetables go on the bottom.

Should I Replace a Microwave with an Instant Pot?

Considering everything that’s been said above, one thing’s for sure- the Instant Pot can easily be used to re-heat a variety of dishes. With that said, can it replace the microwave? The answer to that is, no.

While the multi-cooker is capable of doing what the microwave can- that is, reheat dishes, it doesn’t work for all food items. For instance, you won’t be able to defrost a frozen pizza with an Instant Pot; nor will you be able to quickly and efficiently heat up a cup of tea.

In addition to that, the re-heating process generally takes longer with an Instant Pot- from having to set the different modes to having to place the dishes properly into the pot (compare this to simply popping a plate or bowl into the microwave).

As versatile as it is, the Instant Pot should not replace a microwave. With that said, there’s no harm in making use of both appliances in the kitchen. After all, they both make meal preparation a lot easier in the end.