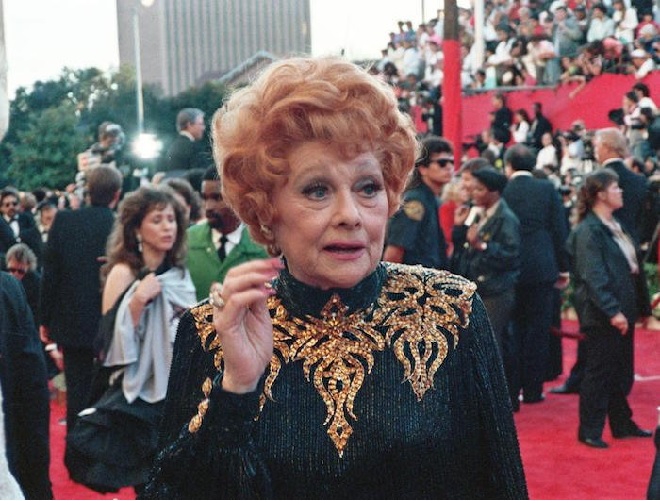 Lucille Ball was an actress, comedian, producer, and model who is best known today for one of the most-loved TV shows of all time, the classic sitcom I Love Lucy. But Lucille Ball was much more than just a performer. She paved the way for women to succeed at high-level positions in the entertainment industry at a time when men were exclusively in charge, and during the second part of her career, as a major producer of TV shows, she was at least partly responsible for bringing classic shows such as ‘Star Trek’ and ‘Mission: Impossible’ to our screens.

Lucille’s influence on the entertainment industry is still felt today, almost thirty years after her death, and the enduring legacy of I Love Lucy has even seen the creation of National I Love Lucy Day, which is held on October 15th every year. During her life, Lucille Ball received several major awards, and she also earned a considerable fortune throughout her multi-pronged career. But exactly how much was Lucille Worth? Read on to find out.

How Did Lucille Ball make her money & wealth?

Lucille Desiree Ball was born in Jamestown, New York on August 6th, 1911. Her father Henry was an electrician, and shortly after her birth the family moved to Michigan where he was employed as a telephone lineman, but when Lucille was only three years old, tragedy struck when her father died after suffering from typhoid fever. Lucille’s mother, who was also called Desiree but was known as ‘DeDe’, returned to New York, and four years later she re-married.

When she was fifteen, Lucille convinced her mother to allow her to join the John Murray Anderson School of the dramatic arts in New York City, where Bette Davis was a fellow student, but the experience was not one that increased Lucille’s confidence when performing. Her instructors were of the opinion that Lucille didn’t have what it took to be successful in show business, and Lucy later admitted that at the time she was a ‘Tongue-tied teenager’. Eventually, the school wrote to DeDe, telling her that Lucy attending the school was a waste of time, as she was ‘Too shy and Reticent’ to succeed. 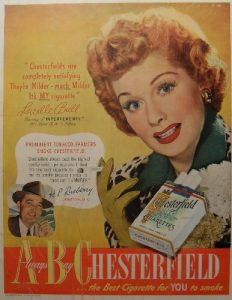 Lucille Ball was determined to prove her teachers wrong, and she remained in New York, working as a model for the fashion designer Hattie Carnegie, and then later as a Chesterfield Cigarette Girl. She worked on Broadway briefly, in chorus lines, but in 1933 she decided to move across the country to Los Angeles, to seek out acting roles in the far more movie-oriented environment of Hollywood. Lucille appeared in a few films in uncredited roles, and appeared in minor roles with the Three Stooges, in ‘Three Little Pigskins’ in 1934, and the Marx Brothers, in ‘Room Service’ in 1938. She appeared in several Fred Astaire and Ginger Rogers films, most notably ‘Top Hat’ and ‘Roberta’ in 1935, and the following year she had a small supporting role in ‘Follow the Fleet’.

Lucille Ball was a familiar face in Hollywood, but a major break still eluded her. She became known as ‘Queen of the B’s’, due to her frequent roles in B-Movies, and she worked extensively in radio, most notably on the long-running Phil Baker show. A string of second-tier films followed through the early 1940’s, and Lucille’s career stagnated. In 1948 she was cast as Liz Cugat, a quirky housewife in a CBS Radio show, ‘My Favorite Husband’, and CBS, impressed by the show’s popularity, were interested in developing it for television. 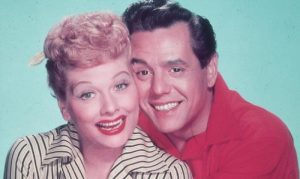 At first, Lucille insisted that her real-life husband, Cuban-American bandleader Desi Arnaz played the part of her husband on the TV version of the show, but CBS were unsure how audiences would react to the relationship. Lucille and Desi decided to take an I Love Lucy-style show on the road, with a vaudeville act produced by their own production company, Desilu Productions, and it was such a success that CBS soon agreed that Lucille and Desi could play husband and wife on-screen.

Lucille and Desi also insisted that the show should be filmed in Hollywood, rather than in New York where most TV shows were being produced. This was because their marriage had been strained for some time through their busy work schedules, and it was an opportunity to work together at last. Lucille and Desi also persuaded CBS to shoot the show on film, rather than the cheaper kinescope which was commonly used for TV shows at the time. Although CBS objected to the cost, Lucille and Desi eventually agreed to take a pay cut in return for full ownership rights to the show, and the rights to produce it exclusively, a deal that eventually cost CBS millions.

On October 15th, 1951, I love Lucy premièred on TV, these days it’s National I Love Lucy day, to honor the incredible impact the show has had on TV entertainment ever since. The show pushed the boundaries of what was expected, and acceptable, in entertainment. It covered previously unexplored topics such as marital issues, suburban living, and women in the workplace. The show may have appeared to be improvised at times, but it was the result of endless rehearsal, and Lucille frequently spent hours practicing facial expressions and movements. Lucille was a perfectionist, her comedy antics on-screen went on to inspire countless other comedians, and the show was successful like no other show before it.

I Love Lucy was the number one rated show nationwide for four of its six seasons, and in 1953 it achieved an audience share of over 67%, unheard of at the time. It pioneered a number of production methods that are still used today, most notably, multi-camera angles and filming in front of a live studio audience. The success of the show spawned two feature films starring Lucille and Desi, and Lucille’s position as the head of a major production studio inspired many future female executives in Hollywood to aim higher than they had before. The show also led to a spin-off show, ‘The Lucy-Desi Comedy Hour’, and Desilu productions created several other TV classics, such as ‘Star Trek’, Mission: Impossible’ and ‘The Untouchables’.

Lucille and Desi divorced in 1960, and she later bought his share in Desilu Productions. She sold the studio in 1967 for $17 million, worth the equivalent of $125 million today, and the company was merged into Paramount Pictures. Lucille Ball died on April 26th, 1989 at the age of 77, after undergoing heart surgery in Los Angeles. At the time of her death, she had a net worth of $40 million, the equivalent of $80 million today.

Lucille and Desi Arnaz, a bandleader and an actor, met on the set of the Rodgers and Hart stage production of ‘Too Many Girls’ in 1940. They struck up a close friendship immediately and married a few months later. Desi and Lucille divorced in 1960, and he died in 1986 at the age of 70.

Did Lucille Ball have any Children? 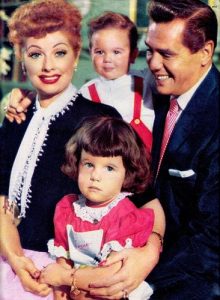 Lucille gave birth to their first child, daughter Lucie in July 1951, just before the runaway success of I Love Lucy, and the couple had a son, Desi Jr, in January 1953. Her on-screen character also gave birth at the same time as Lucille did in real-life, as Desi and Lucille had written the pregnancy into the show, although CBS insisted that the word ‘Pregnancy’ could not be used, instead insisting that ‘Expecting’ be used instead. This led to one of Arnaz’ most memorable lines when he deliberately mispronounced the word as ‘Specting’, which resulted in a sustained bout of laughter from the audience. The episode where Lucy Ricardo gave birth was watched by a record 44 million viewers, while Lucille was giving birth to Desi Jr on the very same day. Lucie has since had a moderately successful career as a producer, actress, and singer, and Desi Jr has the unique distinction of being an actor who made his on-screen début even before he was born.

Lucille’s considerable achievements in the entertainment industry led to a wealth of honors and awards during her lifetime. She appeared on the cover of TV Guide 39 times, more than any other person, and the magazine voted Lucille the Greatest TV Star of All Time in 2001, marking the 50th anniversary of the show with eight collectors covers. Lucy received two stars on the Hollywood Walk of Fame, one in 1960 for her work in movies, and a second for her television career. She was nominated for thirteen Primetime Emmy Awards and won four, she also won the Golden Globe Cecil B. DeMille Award in 1979. In 1984 Lucille was inducted into the Television Hall of Fame, and two years later she received the Lifetime Achievement Award from the Kennedy Center Honors. In July 1989, two months after her death, President George H.W. Bush posthumously awarded Lucille the Presidential Medal of Freedom.