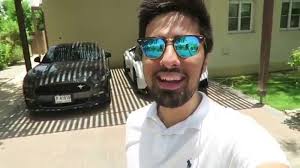 An Internet celebrity, Mo Vlogs rose to fame for his luxury car-related videos on YouTube. Since the launch of his channel in 2013, the twenty-something from Dubai has gained more than five million subscribers. His first video, My First Vlog! was uploaded in December 2014. At one point, he also had a gaming channel, though it is no longer being updated.

Like most YouTube stars, the twenty-something can also be found on several other social media platforms such as Instagram and Twitter. In fact, he has already gained over 1.3 million followers on the photo-sharing app.

How much does he make from his YouTube channel considering the number of views that he pulls in? How lucrative is his online career? How much has he earned so far? How wealthy is he? According to various sources, Mo Vlogs’ 2018 net worth hovers at approximately $2 million. Curious to know where the majority of this came from? Be sure to keep reading below!

How did Mo Vlogs Make His Money & Wealth?

Born on March 8, 1995, Mo Vlogs spent the first few years of his childhood in his birthplace of Dubai, before moving to London with his family. The younger of two siblings, he has a sister named Lana Rose, who is a popular Instagram personality. Unfortunately, not much else is known about his early life at this time.

Like many teens, he eventually decided to join YouTube in 2013. With that said, it wasn’t until a year later, that he posted his first video, My First Vlog!. Some of his other early uploads include Making Them Gym Gains!, I Dropped a Dumbbell on my Face!, and Last Blog Before Dubai.

Since then, his vlogs have grown tremendously popular. If anything, however, he is most noted for his luxury car-related videos. As of 2018, his content has earned him more than 5.7 million subscribers with over 1.5 billion views, making him one of the most popular users from the Middle East.

With the audience that he has, it’s easy to see how he’s capable of making a decent amount of money from his channel. According to Nailbuzz, the Dubai vlogger receives an average of 1.8 million views a day. Given that he’s chosen to display ads on most of these videos, he would earn well over $3,000 a day from advertisements alone. Doing the math, this works out to be earnings of well over $1 million a year.

In addition to YouTube, the twenty-something is also well-established on other platforms such as Instagram, Twitter, and Facebook. Given his significant fanbase, it’s likely that he’s also partnered up with various companies for extra income on the side. With that said, most of his revenue does come directly from his YouTube videos. In fact, he used to even have a gaming channel!

While he isn’t married, the Dubai vlogger is currently in a relationship with Narins Beauty, a fellow YouTube personality.

Does Mo Vlogs Have Any Children?

No, Mo Vlogs does not have any children.

Did Mo Vlogs Go to College?

Unfortunately, not much is known about Mo Vlogs’ education background at this time.

What is Mo Vlogs Famous For?

Mo Vlogs rose to fame for his luxury car-related videos on YouTube. As of July 2018, he has gained more than 5.7 million subscribers on the site.

Mo Vlogs currently splits his time between Dubai and London, England. We do not have any pictures of his abode to share at this time.

What Kind of Car Does Mo Vlogs Drive?

The YouTube star owns a number of luxury vehicles including a Lamborghini, Ferrari, and Mustang.

How Much Money Did Mo Vlogs Make Last Year?

We do not have any information on Mo Vlogs’ 2017 earnings at this time.

Over the past year, Mo Vlogs has added numerous new videos to his channel. Rising in popularity as we speak, he gained over two million subscribers from January 2017 to January 2018, according to Socialblade.

Want to keep up with the Dubai vlogger? If so, how about giving him a follow on other online platforms? You can find Mo Vlogs on Twitter and Instagram at @Mo_Vlogs_. On Facebook, he also has an official fan page, which you can “like” here.