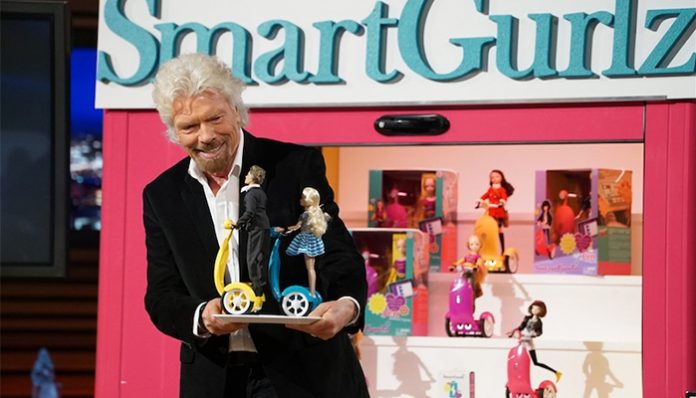 A line of scooter-riding dolls, SmartGurlz are unique in that they encourage girls to learn how to code. Programmable with the use of an app, it provides young children insight into the worlds of Math, Engineering, and Science.

The brainchild of Sharmi Albrechtsen, SmartGurlz was created after she grew frustrated with the lack of educational toys on the market. The mother of a young daughter, she had discovered that most of the robot toys in stores were geared towards boys—that is, they focused around shooting and fighting.

Noticing the gap in the market, she decided to take matters into her own hands, and create a robot for doll-loving girls. Many hours of working on the project later, the SmartGurlz robots—fashion dolls with ride-on robotic seaways—were born. Incredibly unique, they are designed to teach young girls the fundamentals of coding through the use of a mobile app.

Not only that, but each of the dolls has their own character and personalities—for instance, there are chemists, mathematicians, and computer hackers. Knowing that most girls like to create stories and role play, Sharmi also made it so that the robotic toys have their own story-based missions, and adventures, which keeps things it fun and engaging.

Upon developing the product, Sharmi decided on a limited pilot launch in Europe, with 4,000 units to test and learn more about the market. While there were a few issues with manufacturing costs, the endeavor soon proved to be a success. Before they knew it, they had they caught the attention of people all around the world. In fact, the nearly sold-out on all of their dolls. In attempts to further grow the company, they eventually partnered up with Choon’s Designer—the maker of Rainbow Loom, for the U.S. launch of SmartGurlz in May 2017.

Not long afterward, it was announced that they would have the chance to pitch the item on ABC’s popular series, Shark Tank. The episode eventually aired in the United States on November 12, 2017. 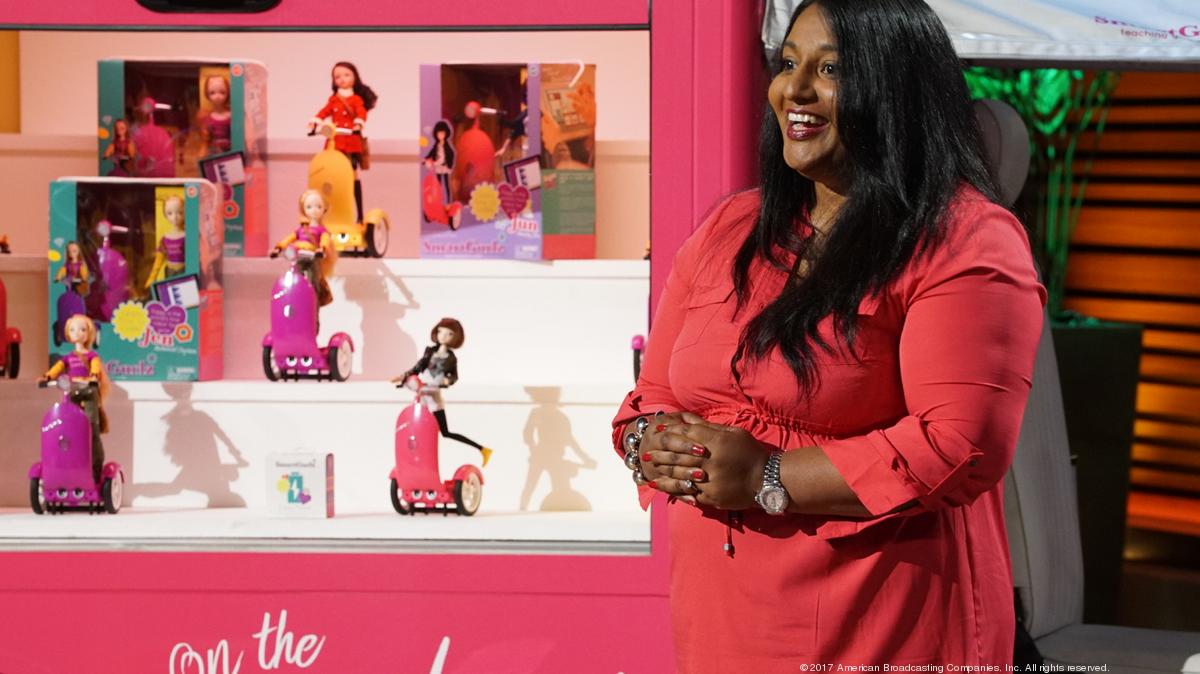 Walking into the set with a smile, Sharmi introduces herself to the judges, after which she tells them that she is seeking $200,000 for 5% of her company, SmartGurlz.

Beginning her pitch, the CEO states that while the latest robots and drones are super cool, they are all geared towards boys. Continuing, she explains that there is a major shortage of female engineers in the U.S. in the male-dominated workforce. In order to encourage more girls to get into science, technology, engineering, and math, she says, you have to show them how fun it can be—“by integrating it into the toys that they play with.”

Gesturing to the products beside her, she introduces SmartGurlz Siggy, the world’s first coding robot for girls. Seconds later, a couple of the robotic dolls make their entrance into the tank, on what appears to be a scooter Segway. As the sharks laugh at the scene, Sharmi tells them that each of the toys come with a self-balancing Segway, which can be connected to a smart device such as a phone or a tablet.

Using their Sugarcoded proprietary app, she explains, girls can start coding “with the touch of a button.” To demonstrate, the founder says that the two SmartGurlz dolls will now give a dance—one that was coded on their app. As the music begins to play, the toys along with their handlers, show off a few moves, which garners a few chuckles from the panel.

As soon as the dance finishes, she invites the sharks to come up to try the dolls. The first to give it a go, Richard walks up and to his surprise, is handed a doll of himself. After handing him the toy, she proceeds to offer the rest of the sharks their own versions. Excited, they quickly open the box to examine the product.

Afterward, the attention goes back to Richard, who is being taught how to code by Sharmi’s two helpers. Following their instructions, his SmartGurlz doll eventually moves accordingly, which earns him a round of applause from the sharks. As he returns to his seat, Lori asks the girls whether or not they find the toy “easy or hard” to use—to which one of them quickly replies “easy.” Elaborating, the other helper says that while there might be a slight learning curve at the beginning, it gets easy with time. 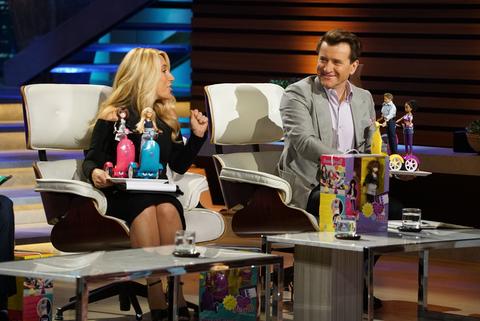 Curious about its functionalities, Robert subsequently asks whether or not children can input more complexed commands, to which Sharmi replies yes. Explaining further, she tells him that the app “actually allows them to see the code that they’ve made.” As Robert nods in acknowledgment, Richard inquires her motivation—aka how she had come up with the idea.

In response, the inventor says that it all started when she noticed her daughter was struggling with math. Walking into a room filled with dolls soon afterward, she wondered whether or not it would be possible to link the two things together “to make something that’s more inspiring.” Upon further prompting, she reveals that this had happened just two years ago.

Asked what her next steps were, she says that they had spent a year working out the mathematics. Continuing, she explains that the corresponding app, SugarCoded, is very girl-centered in that it is story-based. Revealing that the company has only been up and running for less than six months, she tells the sharks that they have done $250,000 in sales so far.

As far as where the sales came from, she tells them that she had participated in the World’s Toy Fair with six prototypes. To her surprise, she eventually walked away from the event with the names of 300 different companies who were interested in the product. Realizing the doll’s potential, she talked to some of them and was able to secure a few distributing agreements—which ultimately helped her to raise the funds.

From there, Robert inquires about the $250,000 in sales, which Sharmi explains had come from a mix of distributors, retailers, and Amazon. Asked where the products are available now, she says that they can be bought from their website for $79.99. As if on cue, the sharks subsequently ask about the manufacturing costs, to which she replies that each unit costs $18 to make.

Moments later, she is asked to justify the company’s $4 million valuations. In response, she tells them that the self-balancing algorithm is the highlight and that it could actually be sold. Continuing with further prompting by the sharks, the inventor states that they have a provisional patent on the product.

Commenting that it’s a neat idea, Daymond goes on to tell her that he is interested in licensing the toy. With the remark that she’s asking a lot, he makes her a counteroffer—$200,000 for 30% share of the company. Not long afterward, the attention goes to Robert, who begins to talk about the decline of fashion dolls in the toy industry. Though he applauds her work, he ultimately tells her that he will be dropping out “as it’s a tough business to be in.”

With three sharks left, Lori begins to share a story about one of her previous business ventures—in which she sold a line of dolls that had imperfections. While the toy was initially a hit, she explains that Barbie soon copied the idea, which crushed the product. Defending SmartGurlz in response, Sharmi tells them that there is currently no other toy geared towards girls in the robots section at the toy store.

Noting that Daymond’s licensing offer is the way to go, Lori eventually also backs out. As Sharmi looks on anxiously, Richard begins to talk. While he’s impressed with her work, he tells her that he doesn’t feel that he can contribute anything to the project, which leads him to also drop out. 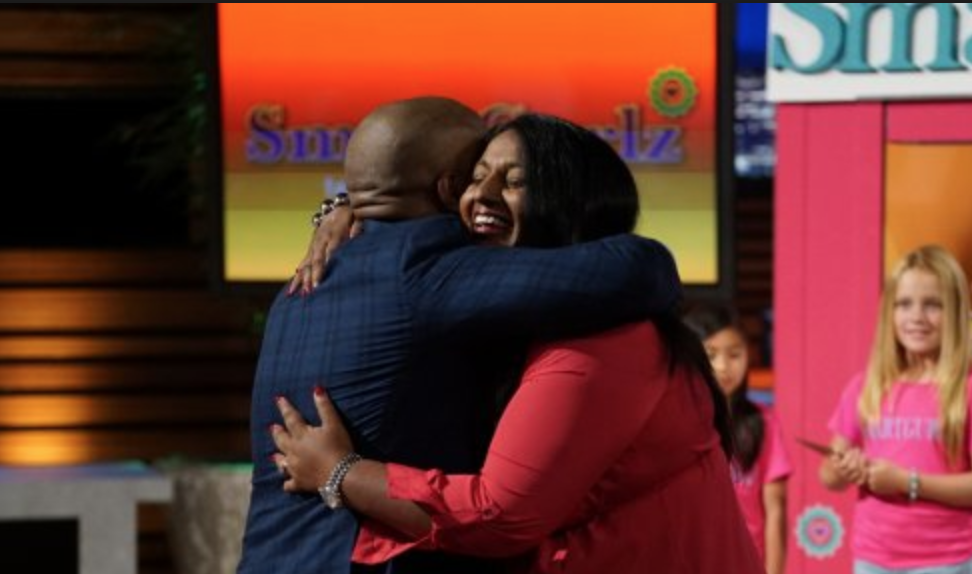 Finally, the attention goes to Mark—the last remaining shark. To her dismay, however, he also backs out. Back to considering Daymond’s offer, Sharmi asks whether or not he will consider lowering it to $200,000 for 20% stake, to which he says no. Trying her luck again, she gives another counteroffer—$200,000 for 25%. Worth the effort, the shark eventually agrees. Having completed the deal, he subsequently walks up to give her a brief hug, as the rest of the panel give her a hand of applause.

Offering her thanks one last time, Sharmi and her two helpers begin to walk backstage. Noticeably excited in the subsequent interview, she exclaims that they’ll be able to do a lot more with Daymond’s help.

SmartGurlz in 2018 – The After Shark Tank Update

More than half a year has passed since the SmartGurlz was featured on Shark Tank. How is the company doing nowadays?

Unsurprisingly, the company has grown tremendously since the episode aired on television. For one thing, they’ve since surpassed $1.2 million in sales—a huge jump from the $250,000 they were at just months ago. As if that wasn’t impressive enough, they’ve also partnered up with Girl Scouts in America as well as Walmart, the latter of which they will be working with for a new product line in 2019. On top of all that, it has also been announced that they’ve recruited Kari Bryon of MythBusters fame as their Chief Creative Officer.

In terms of the business’ next steps, they revealed in a recent interview that they are currently interested in making a line of wearable products such as coddle clothing, bracelets, and headbands for girls/kids. Not only that, but they are currently in the process of talking to Apple retail stores about a potential deal.

Considering the amount of press that they’ve received over the past several months, it’s not surprising to know that SmartGurlz has built up quite a reputation online. On Amazon alone, most, if not all of the dolls have a four-star rating. For instance, the Maria Doll currently has a 4.1-star rating out of over a dozen reviews on the site. Taking a closer look at some of the reviews, it would appear that most users agree that it’s a great educational toy for young children.

Likewise, SmartGurlz also has a 4.4-star rating on their official Facebook fan page.

As expected, the company has also established themselves on social media. Not only are they active on platforms such as Twitter and Instagram, but they even have their own YouTube channel, which can be found here.

Will we be seeing Sharmi back on Shark Tank for an update sometime in the near future? Unfortunately, considering all that’s been going on in the recent months, it’s not likely that she’ll be returning to the show—soon, anyway. If anything, the creator is probably kept busy with the company’s recent endeavors. For now, we’ll just have to wait for the announcement.