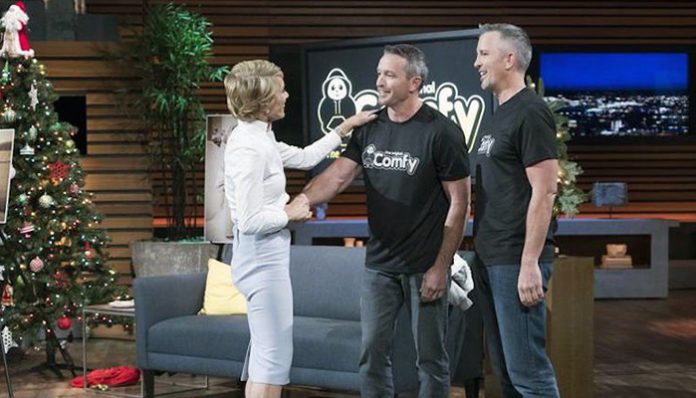 The Original Comfy – Before Shark Tank

A cozy sweatshirt-blanket hybrid, The Original Comfy is the brainchild of Brian and Michael Speciale—a couple of single dads who came up with “a crazy idea one day.” After putting together a prototype, they got to work and found a manufacturer. The next step for the pair of brothers was to get the necessary funding for the project—almost immediately, they had their eyes set on Shark Tank.

Just a month after forming the company, the brothers flew up to Denver, where they attended an open call for the show. In front of the casting producer, they were told to prepare a one-minute pitch. In the end, they decided to sing their own rendition of the Christmas Carol, substituting their product name—The Comfy for Deck The Halls. Despite being nervous, they pulled it off. A couple of days later, the pair received a much-awaited call telling them that they had made it onto the ninth season of Shark Tank!

The Original Comfy on Shark Tank 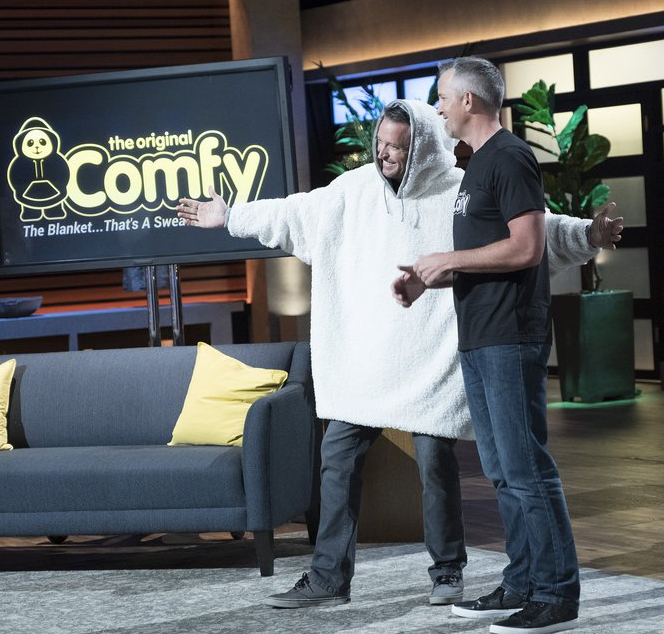 Sometime later, they found themselves standing opposite of the five sharks—Mark Cuban, Lori Grenier, Kevin O’Leary, Barbara Corcoran, and Robert Herjavec. Donning matching t-shirts, the pair quickly introduced themselves as “The Speciale Brothers.”

Getting right to the point, they tell the sharks that they’re seeking $50,000 in exchange for a 20% stake of their company. From there, they dive right into selling their project—The Original Comfy. Bending over toward the couch next to them, one of them pick up what appears to be a big, grey blanket. As he does, the other bursts into song—their own rendition of the Christmas Carol with some minor tweaks in the lyrics.

With smiles plastered on both of their faces, the other brother soon sings along, as he works to unfold the gigantic blanket. Before long, their improv performance earns a chuckle from a few of the judges. Advertising that “it’s a blanket that’s a sweatshirt” in song, the one holding the item soon puts it over his head to wear. Seconds later, he is donning what appears to be a big, oversized, cozy sweatshirt—complete with a hood.

Finishing up their song with a few hand waves, they eventually end by telling the sharks “it’s comfy time.” After a round of applause from the panel, they get right to work explaining the product. In a precise pitch, they tell the sharks that The Comfy is designed to keep people warm—especially during the harsh coldness of the winter. From there, a video clip of someone lounging cozily in The Comfy with a hot drink in their hands is shown on the television screen. 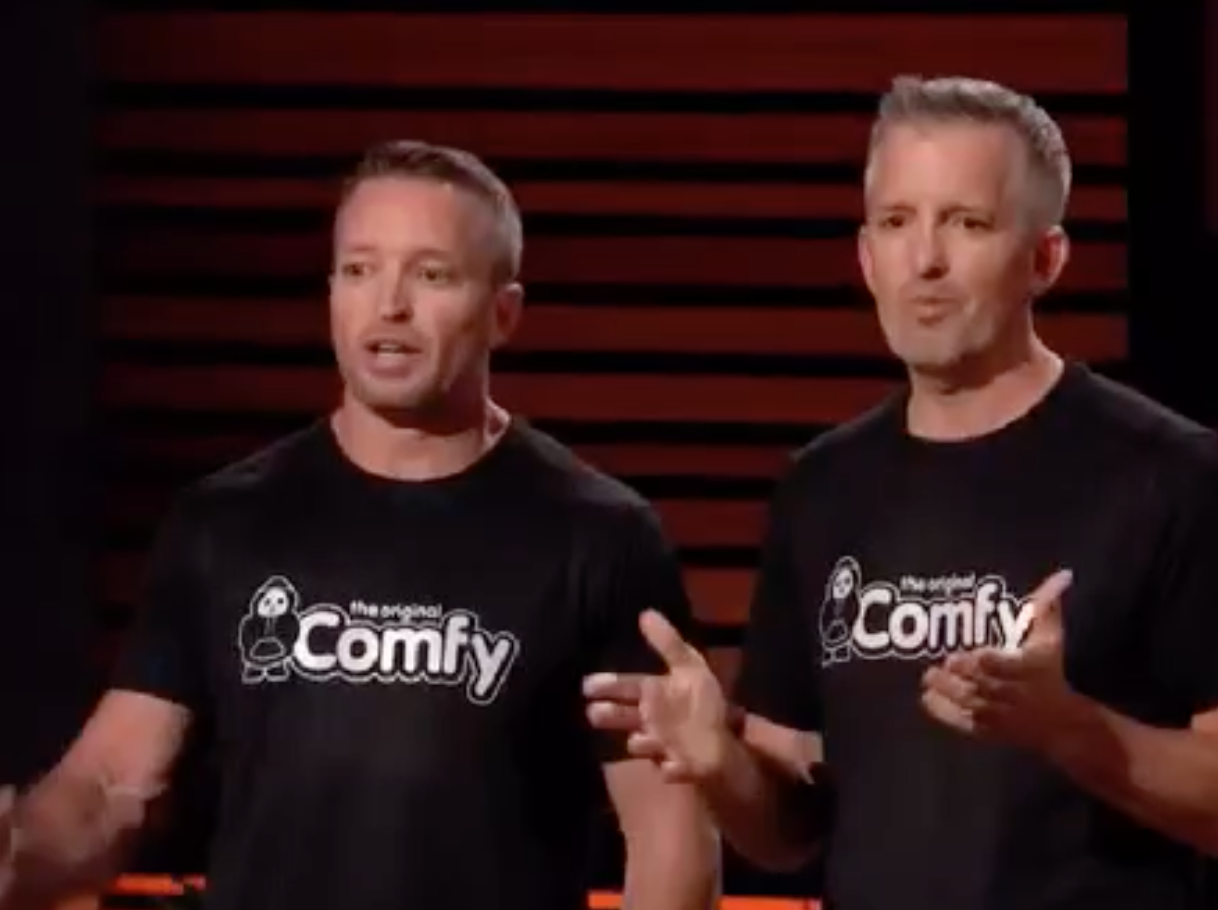 Not only is the product suitable for adults, but “kids love it” according to the brother. With an inkling of what they might be thinking, the Speciale brothers tell the sharks that while it may be similar to “a certain infomercial product,” The Comfy is different in that it is made out of a special microfibre material on the outside and luxurious sherpa on the side. Next, they bring their attention to the big pocket at the front of the blanket/sweatshirt, which has enough room for “a phone or even a tablet.”

Of course, there’s also an over-sized hood, which can “double as a pillow.” Adding to that, they tell them it’s easy to pull in both your arms and legs, as to be completely covered. “But wait, there’s more”—not only is The Comfy one size fits all, something that makes it easy to manufacture, but it is also reversible, that is, it can be worn with the Sherpa material facing outwards, which provides the wearer with some “styling options.”

With their pitch complete, they give their attention to the sharks, many of whom are still laughing from their singing. Wanting them to try the product for themselves, the brothers eventually hand each of them a gift—their own, different colored Comfy. Almost immediately, the sharks put the product on. Realizing that they’re still sitting in their tiny chairs, the pair soon invites them to come to try it out on the couch, where “it’s meant to be worn.”

Flocking to the couch, they make themselves comfortable. With lots of chuckles in between, they quickly admit that it is “fairly comfy.” With their trial lounge complete, the sharks eventually return to their seats to ask the creators some questions, the first of which is—“Have you sold any yet or is it a brand new invention?” To that, the brothers enthusiastically reply that it is a brand new product. Elaborating further, they tell the panel that they’ve been working on it for the past six months and that while they have no sales yet, they are ready to put in their first major order.

Upon saying that, they’re asked another question—this time about their distribution plan. To that, they reply by saying that they plan on selling it for $39.99. When asked about the manufacturing costs, they tell the sharks that it costs around $17 to make, to which they comment that the margin is not great. Depending on the amount, however, they state that the cost can be as low as $11—if they were to purchase 100,000 units at one time.

With a few doubtful looks, one of the sharks soon inquires about the story behind the product. To that, Michael explains that he had actually recently gotten into a divorce and that he had been taken in by his brother. While staying at his house, he had noticed that his nephew had a habit of wearing his dad’s oversized sweaters on the couch with his knees and arms pulled in. Commenting on how comfy and cozy it looks, the siblings eventually wondered whether or not they could make them for adults. Noticing a Sherpa blanket folded on the couch, they decided then that that would be the material that they’d want to make it out of. 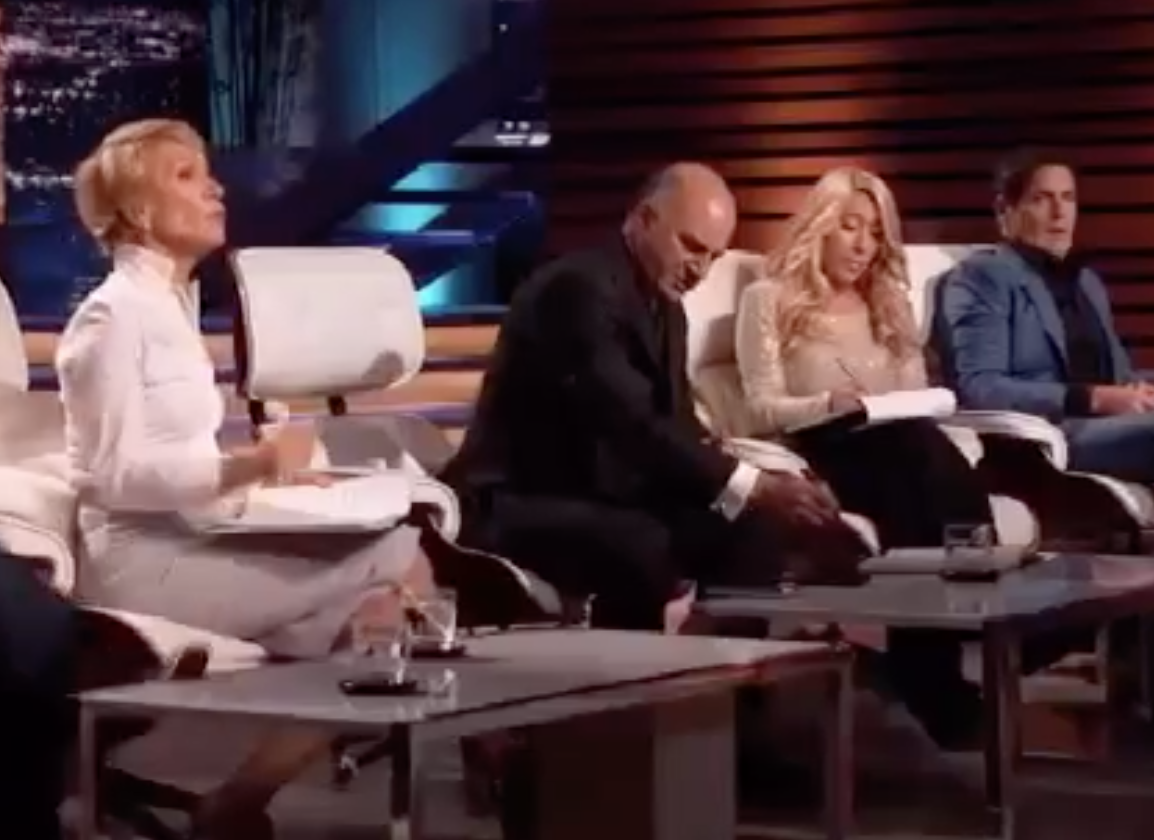 As much as the sharks liked their story, however, they had a few concerns—one of which was its big similarity to the “other one” (i.e. the Snuggie). Continue to elaborate, Lori comments that the only major difference that she can see between the two products is that the Comfy has a hood. When prompted further, it’s revealed that she has hesitations due to the fact that she does a lot of business with the other party. Finding it “not unique enough”, she soon backs out.

Adamant that the two products are not the same, the brothers soon explain to the rest of the sharks that while the Snuggie requires to be taken off “like a backward robe” when you want to move, the Comfy can simply be worn on the go. While Mark is seemingly satisfied with that explanation, however, his concerns over the brothers’ lack of readiness to tackle the product eventually causes him to back out.

With two sharks out, the brothers are left selling the Comfy to the remaining three. With a bit of luck, Robert soon expresses interest in the product, especially after having heard that the Snuggie had sold 22 million units upon its launch. As usual, however, there’s a catch—he’s willing to invest $50,000 in the company, for a 50% stake.

From there, things get more interesting as Barbara underbids him with an offer of a $50,000 for 30% stake. To add to that, she states that she can easily help the brothers sell the product online, as she’s got much experience in that area. After a moment of contemplation, Michael gives a counter offer—$50,000 for 25% stake, to which she, unfortunately, says no.

With that, the brothers are left nervously smiling. Seconds later, however, Kevin O’Leary breaks the silence, reminding everyone that he is not out of the game yet. In an anti-climatic fashion, however, he soon tells everyone that he is out seconds later, which leaves the rest of the sharks laughing. Thanking him for his feedback, the brothers are soon back to considering Robert and Barbara’s offers.

Not long afterward, the brothers decide to take Barbara’s offer—$50,000 for 30% stake. As a wrap-up, they say their thanks, after which they give her a brief hug, before walking off the set. With that, they’re left celebrating their success off stage.

The Comfy Now in 2018 – The After Shark Tank Update

Since their appearance on the show, more than half a year has passed (their episode originally aired in December 2017). How are the Speciale brothers doing nowadays with The Original Comfy?

Following their appearance on Shark Tank, The Original Comfy became a huge success. In fact, the product had quickly sold out within 24 hours of the show’s airing. Before they knew it, they had also gone viral on social media, which led them to receive orders from all around the world (from over 70+ different countries). Needless to say, the outcome was more than positive.

Despite the fact that summer has now arrived, the brothers have revealed in a recent interview that the orders are continuing to pour in. In fact, they have only recently just caught up with their inventory. Thinking back to their appearance on Shark Tank months ago, they feel even stronger about their creation today.

In terms of their web presence, it’s obvious that they’ve come a long way. Compared to before, when no one knew about the product on the internet, the company now has a full-fledged website complete with a web-store, through which customers are able to purchase the product (for the advertised $39.99). Of course, there’s also a section on the site which details their experiences on Shark Tank.

Aside from having established their own website, The Original Comfy has since also made themselves known on social media (as briefly mentioned earlier). For one thing, they have thousands of followers on their Instagram account, @theoriginalcomfy. Not only that, but they can be found on a few other platforms such as Twitter (@OriginalComfy), as well as Facebook (@theoriginalcomfy), the latter of which has already accumulated over 11,000 likes!

As far as what the brothers have ahead of them, it has been announced that The Original Comfy will be put up for sale on QVC in July. From there, the big-name retailer Bed Bath & Beyond will also be picking up the product in the fall of 2018. With such plans in place, there’s no doubt that the product’s popularity will continue to rise. For those who prefer doing their shopping online, it will of course, also be made available for sale on Amazon (though it’s already available via their official website).

Will the Speciale brothers be returning to the TV program anytime soon? As you probably already know, Shark Tank often invites back its entrepreneurs for an update, following their original appearance on the show. Though nothing is concrete, for now, the brothers have hinted at a possible Shark Tank Update sometime in the near future. For now, though, we’ll just have to cross our fingers and wait for the announcement on their official website.