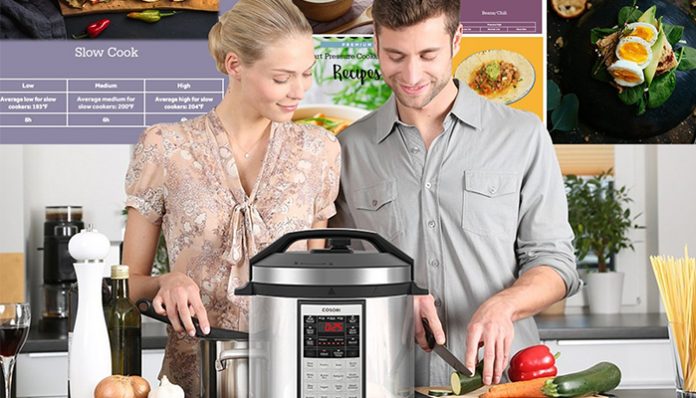 Cooking has never been easier with the Instant Pot! Convenient and easy-to-use, the nifty gadget is capable of whipping up delicious meals in a matter of minutes- why cook on the stovetop when you can just press a button? Not only that, but it saves a bunch of room on your counter by replacing seven different kitchen appliances! Considering all that, it’s no wonder why it has shot to the top of shoppers’ lists in the recent years.

History Behind the Instant Pot

Invented in Canada, the Instant Pot promotes healthy eating by offering busy families a way of preparing delicious yet easy-to-make home-cooked meals. Released in the market in 2010, the multi-cooker is often regarded as the brainchild of Robert Wang, a former software engineer.

Wanting his family to adopt healthier eating habits, he made it his mission to create something that would allow individuals to cook quick, yet healthy meals at home. With his goal set, he assembled a team together, with whom he worked tirelessly for the next several months. Finally, their efforts paid off in 2010; the group had successfully designed an electronic multi-cooker, which they named the Instant Pot.

What the Instant Pot Can Do In the Kitchen

A multi-faceted device, the Instant Pot is often regarded as a 7-in-1, that is, it replaces seven of the most common kitchen appliances. Not only does it function as an electric pressure cooker and slow cooker, but it also offers the same functionalities that you’d find in a steamer, rice cooker, saute pan, yogurt maker, and more.

Complete with over a dozen smart built-in programs, you can easily cook a variety of dishes with the press of a single button. Some of the different modes include:

Note: Different models have a different amount of built-in programs

What Can You Cook with an Instant Pot?

With all the features that it comes with, it’s easy to see how the possibilities for cooking can be endless. If anything, the question is- what can’t you cook with an Instant Pot? With its pressure cooker functionalities alone, the Instant Pot is able to whip up dozens of different meals!

To give you an idea, the cooker can easily be used to cook meat, rice, vegetables, soup, yogurt, and porridge. For those who like to indulge in sweet things, you can even use it to make fancy desserts such as cheesecake!

What Can’t You Cook with an Instant Pot?

Here’s the better question, what can’t you cook with the nifty gadget?

– Deep Fried Foods: An Instant Pot does not get hot enough for deep-frying (i.e. it’s not meant to be used as a fryer).

– Dairy-Heavy Dishes: For things like macaroni and cheese, you’re better off using the stove. Due to the cooker’s high heat, the milk content tends to curdle which makes thing less appetizing.

– Canned Foods: The multi-cooker isn’t designed for canning as it doesn’t allow you to closely monitor the temperature during the cooking process (it measures the pressure instead).

For a better idea of the Instant Pot, let’s go over some of its advantages and disadvantages.

Instant Pot vs Other Electric Cookers

Given how popular the Instant Pot has become, it’s only natural that people have started to compare it with other electric cookers. In fact, we’ll be doing just that below. What will we be comparing it against? The Cosori Pressure Cooker.

The Cosori Pressure Cooker – What Is It?

Despite the fact that it’s a relative newcomer, the Cosori Pressure Cooker is definitely worth looking at! If anything, its functionalities can easily be compared to that of the Instant Pot.

While it’s true that the Cosori is a little less known, it has been gaining popularity quick over the past year. Similar to the Instant Pot, a variety of models are available from the company. With that said, the best-selling unit is probably the 7-in-1 version (6 quart).

More About the 7-in-1 Cosori Pressure Cooker

Capable of preparing food up to 80% faster, the Cosori 6-quart comes with 15 different preset modes to suite a variety of application, from slow cook to saute. For those who’d like a bit more control, it also has a manual mode, which allows you to customize the cooking time. Whether you’re craving chilli or pot roast, simply place the ingredients into he cooker, add liquid, and select your program.

– A multi-functional cooker, it can be used as a slow cooker, pressure cooker, saute pan, rice cooker, food warmer, stock pot, and steamer

– Preserves up to 95% of vitamins without sacrificing texture and taste

– Saves up to 80% energy and time compared to traditional methods

Now that we know more about the gadget, let’s go over some of its pros and cons. Hopefully, this will give you a better idea of the multi-functional cooker.

– The stainless steel inner pot is dishwasher safe
– The 6 quart is great for families
– Control panel is easy to use
– Comes with a delay timer feature, which is handy when you want to come home to a freshly-cooked meal
– Features 9 safety mechanisms, so you can be at ease
– Generally easy to clean up

How does the Cosori Pressure Cooker hold up against the Instant Pot? Which would be a better purchase? To help with your decision, we’ve put together a comparison of the two appliances.

– Can be pricier (especially for newer, fancier models)

– Does not come with a yogurt making function
– The brand is not as well known
– At the time of this writing, only four models are available
– Not as many sizes to choose from

Comparing the two, the Instant Pot tends to outshine the Cosori cooker. Made from a more established company, you can easily find detailed reviews, recipes, and tips for the gadget online, whereas there might not be as much for the latter.

Having said that, the Cosori Pressure Cooker can be solid option, especially for those who’d like to spend less on the appliance. In contrast to the Instant Pot, which sells for over $120 depending on the model, you can easily get one from Cosori for less than $100. In fact, the 8-in-1 is selling for $69.99 on Amazon at the time of this writing.

To sum up, you might want an Instant Pot if…