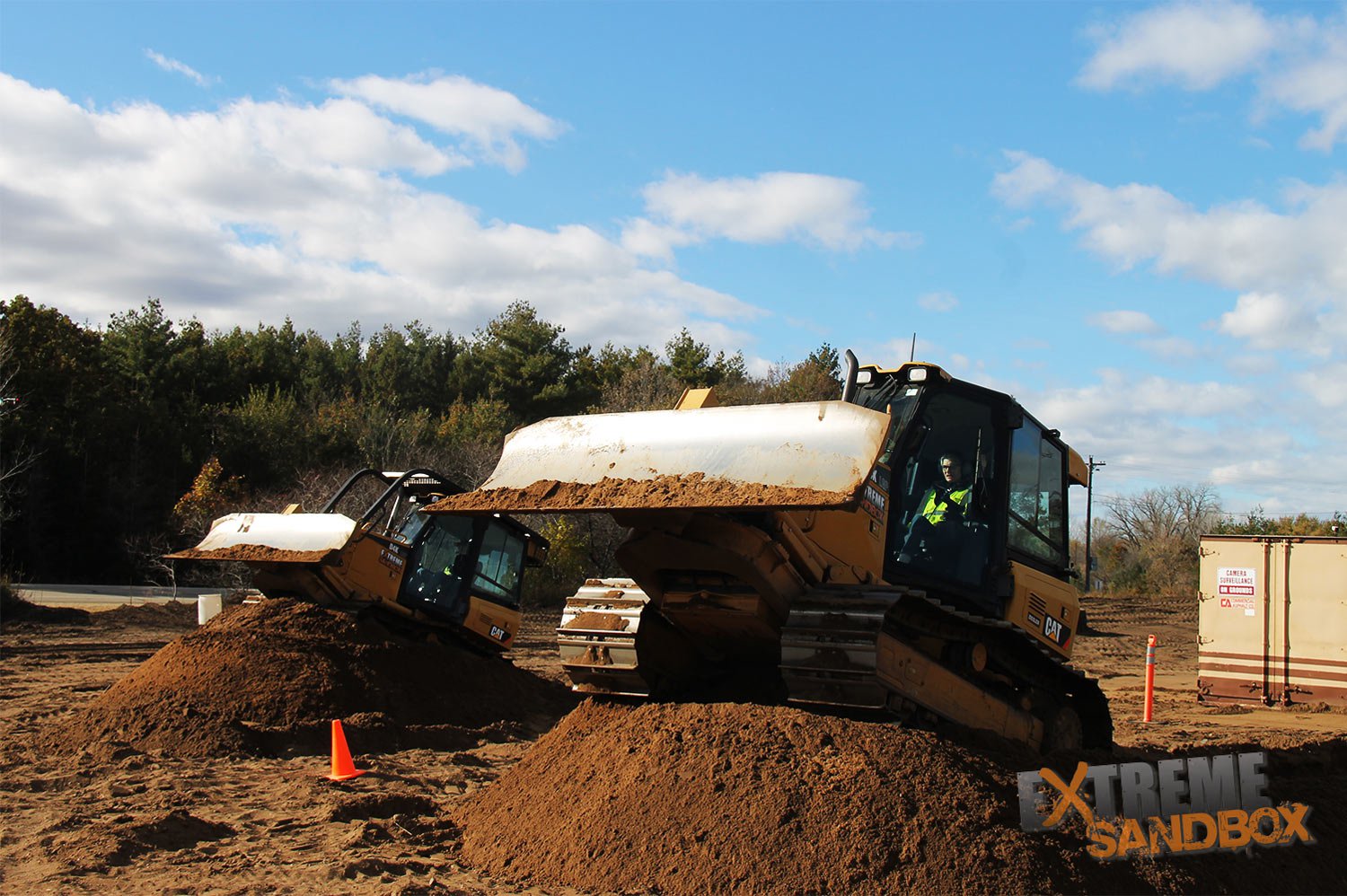 In the audition tape, Randy Stenger introduced himself and said that he lived with his five children and fiance in Minnesota. He stated that he was the founder of Extreme Sandbox. The video showed his kids playing in their driveway, as Randy narrated over it. He said that he had the idea when he was passing a construction site with his children. The kids said that it would be fun to play on the equipment, which got the gears in Randy’s head turning. The scene changed to the front room of business, where Randy greeted potential customers. The narration said that Extreme Sandbox is a company where clients get to play on real life construction equipment. It showed a “foreman” directing happy looking people through a 10-acre construction site style sandbox. They have many different types of construction equipment such as bulldozers, excavators, and they also have the ability to crush cars. Randy claimed that Extreme Sandbox has the power to make dreams come true.

As the tape showed Randy taking reservations over the phone, he told the audience that he quit his 6-figure job, and used his entire savings and retirement account to start Extreme Sandbox. He said that he wanted to make it a national brand, and that where he needed the investment from the Sharks to continue forwards. He put the guilt trip in there at the end, saying that his family was counting on him to make a deal so they can improve their future. 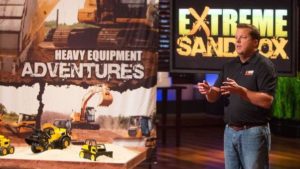 Randy entered the Shark Tank in a black polo shirt with Extreme Sandbox written on the lapel. There was a small sandbox on the stage with children’s construction toys in it. He introduced himself and told the Sharks that he was the CEO and founder of Extreme Sandbox. HE said that he was seeking $150,000 in exchange for 15% equity in the firm. He asked the Sharks to think back to when they were children. I can’t imagine Kevin O’Leary as a child, much less a happy, innocent one playing in a typical sandbox. Daymond took his task to heart, closing his eyes and looking like he imagined his childhood. Randy continued, stating that the secret to eternal youth is to play in the sandbox that he created.

Rand walked over to the sandbox on the stage and pulled down the Extreme Sandbox banner behind it. There was also a tv on the stage, displaying the real Extreme Sandbox area. Loud, intense metal music played over the video, which showed Randy in a construction vehicle with a car in its jaws.It went on to show excavators digging holes, and bulldozers moving large piles of sand. Randy called Extreme Sandbox an “adventure company” that allows guest to pay in and on construction equipment. Kevin said that he was a fan of that idea, and he looked very excited. Randy stated that he provides his clients with a bucket-list experience, as he allowed them to play with bulldozers and excavators. He said that Extreme Sandbox was a brand that was evolving the way that entertainment is experienced. Randy asked the Sharks which of them was ready to dig up some gold with his business.

Lori said that she thought the idea was cool, and Kevin had a large genuine smile on his face. “I see you’re crushing cars!” he said excitedly. Randy stated that he was, and Kevin asked him if he could crush a car. Randy nodded and indicated that they call that part the Destruction Zone. Mark seemed to be impressed by the name. Robert asked how much the experience costs per person. Randy told him that the average person pays about $300 to play in the Extreme Sandbox. He called it a once in a lifetime experience. Robert wanted to know if could crush a car for that price, and Randy told him that $400 gets a car crush. Mark asked what their sales looked like. Randy said that they’d done $1 million in sales in the three years they’ve been open. He said that the first year was a tenth of that on a part-time basis, and it’s gotten increasingly more popular over the years. He stated that their goal was to make each location they open up a million dollar location.

Robert said that he was surprised at how cheap it was, and asked if Randy owned the land. Mark cut in before Randy could answer, stating that they were in the middle of nowhere in Minnesota, which should be cheap. Randy explained that they’re located in a suburb of St Paul. Robert asked him how he ended up with the land. Randy said that finding the property was one of the largest challenges the business had overcome. He started off a little barebones by leasing the construction vehicles and the land. Once sales were good enough, he was able to purchase the ground. He said that it was not that pricey.

Robert then wanted to know what the start up costs was for Extreme Sandbox, including the costs of purchasing the equipment. Randy explained that he did not buy the vehicles, opting instead to do a five-year lease. Mark considered that and asked him how much it would cost to open up the next location. Randy stated it would only cost $100,000 to $120,000. Kevin asked where he was planning to open the next location. Randy told him that they were looking at Dallas, TX. Mark said that he had plenty of land in Dallas, looking interested.

Robert asked what the liability factor was, wanting to know what the worst accident they’ve ever experienced was. Randy politely asked him not to jinx him and said that they’ve never had an accident. He explained that they had a way to cut off the engines of any of the vehicles, which they’ve never had to use. Robert asked why he wanted the investment from the Sharks. Randy said he wanted the business to grow faster since he’s reinvested any profit straight back into the firm. He did not have the cash on hand to open up new locations.

Daymond asked Randy what his history was. Randy let him know that he did not have any background in construction, but he was a police officer in Colorado. Lori asked him what his vision was for Extreme Sandbox’s next five years. Randy expressed his lofty goal of having a location in every metro area in the next five years. He said that his major goal was to centralize his front end operations such as making reservations and making calls to clients. He stated that he could have the central office for that in Minnesota for all the locations.

Robert asked how much the current model produce if Extreme Sandbox was able to get more bookings. Randy said that he could get each site up to $1 million a year. Lori stated that she thought the idea was fun, but she did not see the opportunity to scale the business. She went out. Daymond indicated that he found the idea fascinating. He said he saw similar equipment on the beach in Miami, and he sat and looked at the machines moving the sand for about 3 hours, feeling fascinated and child-like. Randy said that he likes to fulfill dreams like that with Extreme Sandbox. Daymond stated that he got the appeal, but didn’t think he could add value to the business. He went out.

Kevin said that he didn’t have “one of those” in his portfolio, which got a laugh from Lori. Randy’s eyes lit up, and he told Kevin that he could use the equipment to dig up all the money he would like to make from it. Kevin said that he wanted to crush a car. He offered Randy $120,000 for 20%, which was very close to Randy’s original ask. Robert cut in, say that he wanted to hear more scaling up talk. He stated that he was not passionate about the construction equipment, so he went out.

Mark indicated that he liked the idea, and he wants that he has land in Dallas to put the next location on. He said that it was the seventh season of Shark Tank, and he was going to do something crazy. He told Randy that if he were able to convince Kevin to go in with him, he would do it. Kevin considered, and said that he would be open to that deal since Mark has the land and contact in Dallas. He said he would also like to start one near Boston, and asked Randy if he was in. Randy considered, wanting to know if they would be able to help him accelerate growth. When they said they would, he took the deal and shook hands on it.

Extreme Sandbox Now In 2022 – The After Shark Tank Update

The deal with Mark and Kevin was finalized soon after the segment aired. With the $150,000, Randy was able to open a second location at Tanglewood Resort in Pottsboro, Texas, in April 2016. Not only that, but they also landed a sponsorship deal with Komatsu America, a global leading manufacturer of construction, forestry, and mining equipment, which allowed them to use their equipment.

When the pandemic hit, however, many businesses shut down. Protocols for social distancing were also put in place. Extreme Sandbox did their best to accommodate their customers. They also began hosting drive-thru events, which allowed people to come out while abiding by social distancing protocols.

In the fall of 2020, they moved their Pottsboro branch to the city of Sachse, to better serve those in the Dallas-Fort Worth area. However, that only lasted for a couple of years. The site ultimately closed down on April 10, 2022, after being sold by the developer. As a result, their lease wasn’t renewed.

As of 2022, they still have one location in Hastings, Minnesota. They’ve also stated that they plan on returning to a new location in the DFW area in the future and that they will also be looking for new locations across the country.

In terms of what they offer, they currently have five packages to choose from Mini Sandbox, Classic Sandbox, Dueling Adventures, Ultimate Sandbox, and Extreme Sandbox.

Mini Sandbox: A 1-hour adventure with a Mini Excavator that includes a 20-30 minute instruction period and 30 minutes of equipment use. $195.

Classic Sandbox (Most Popular): A 1.5-hour adventure that includes a 20-30 minute instruction period and 60 minutes of equipment use (comes with an obstacle course). You can choose between an Excavator, a Bulldozer, or a Wheel Loader. $295.

Dueling Adventures: A two person adventure that comes with 20-30 minutes of instruction and 60 minutes of equipment use (includes an obstacle course). Can choose between a pair of Exavators, Bulldozers, or Wheel Loaders. Approximately 1.5 hours. $395.

Ultimate Sandbox: A 3.5-hour adventure that includes 30 minutes of instruction and 3 hours of equipment use (includes an obstacle course). You can choose any two pieces—Excavator, Wheel Loader, or Bulldozer. $495.

Extreme Sandbox: A 7-hour adventure that comes with 1 hour instruction, and 6 hours of equipment use (includes obstacle course). This package comes with all three pieces—Wheel Loader, Excavator, and Bulldozer. $895

Various upgrades are available as well. For example, you can add a Car Crush experience to any of the above packages for $750. You can also add equipment (+$75) or add a person (+$75). For more information, you can check out their packages page here. You can also send them a message via their contact page if you have any questions.