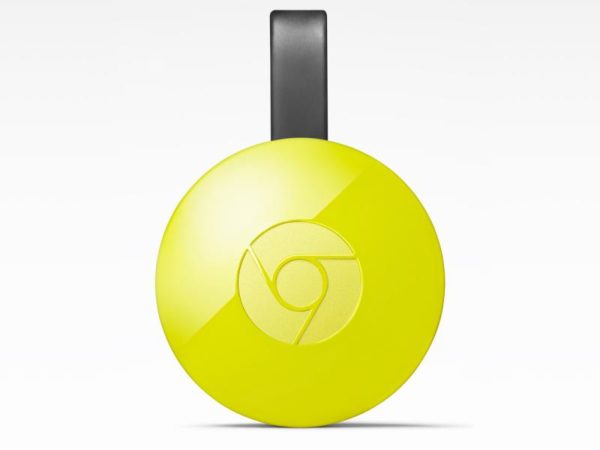 With more and more people cutting the cable these days, many are missing the chance to gather around the TV to watch something with friends and family. One of the most successful alternatives to big cable are the use of streaming devices, which provide old school entertainment alongside new innovation. Here, we will take a look at the king of the dangling dongle, the newest version of the Google Chromecast.

When opening up the box, the first thing that should stand out to anyone is that this is no simple USB stick like so many other streaming devices appear to be. Instead, Google opted to go bold, with a palm sized, brightly coloured disc that attaches via a somewhat stiff and compact HDMI cord. The large disc design isn’t just for aesthetic uniqueness, as it has an external antenna that allows for better reception of Wi-Fi signal as compared to previous models wrapped around itself, and holds all the necessary components of previous models.

While installing this Chromecast, I had two major concerns. The first of these was that given the size of the dongle, I was unsure if the HDMI connection would be steady enough to prevent it from being pulled down by sheer gravity. This turned out to be a none issue, as after installation I tried multiple times to jar it loose from the T.V.. I am now confident that barring an explosion or an earthquake to rival any disaster movie, this little device will keep steady in its port, and honestly, were either to occur, at $35, the Chromecast would be the very least of my concerns in terms of replacement.

My second concern of it being noticed, however, was validated. As it happens, Google has thrown all subtly out the window with this design, allowing the customer to choose a bright red or yellow colour for the disc itself (After time of writing, it was noted that Black is now also an option). With the Chrome logo stamped into the disc itself, it was clear that Google wanted this device to be seen, which proved a problem in keeping the living room both high tech, and Feng Shui. While I don’t exactly mind the design itself, there were a few comedic comments of how the television now had a “clown nose” during a few get togethers. Perhaps added colour options of grey, white and silver would prove to make the Chromecast slightly more appealing in this manner.

The biggest highlight for me in regards to design is that the people at Google decided to add a magnetic back to the Chromecast which made storing and traveling with the Chromecast a breeze. While certainly not a make or break feature for the device, small touches like this do put out the idea that quite a bit of consideration was put into this device from day one, which is always a good sign.

Naturally, a streaming device can be said to be only as good as the content it provides. With the Chromecast, literally thousands of apps with programming are available, though some of it is locked behind location walls, and some common viewing options were not supported (most notably, using Amazon Prime video was all but impossible).

This can in theory be solved by hacking the Chromecast, but doing such a thing is oddly difficult for what amounts to an Android device. Instead of just gaining root access through your typical protocols, many have found that altering the Chromecast to play non-supported or location locked content involves not only some file management and coding skills, but also an actual need for outside equipment (a modified Arduino Leopold, specifically), and to essentially never have updated your firmware to the Chromecast.

Considering that the alternative method for viewing Amazon Video is to plug your PC into the television via HDMI (or getting a Roku, which does have the Chromecast beat in selection), I can’t say it is a practical approach. That being said, Chromecast has plenty of options for viewers in the United States, Australia, Canada and the United Kingdom. Among these are the ever present Netflix, Spotify, and the rather addictive Big Web Quiz.

With the Chromecast, bigger is certainly better. As a result of its unique design, connecting to a Wi-Fi network and subsequent streaming was incredibly quick. Though there were a few hiccups using HD settings on the YouTube App, others apps like Spotify and Netflix experienced practically no latency and the quality of the audio was only limited by the television itself. In terms of the Chromecast App, it was incredibly well designed and made for a great experience, turning the android phone into the ultimate controller and interface system. There were some minor issues with the search function, however, but those will likely be patched within the next update. One of the most advertised features of the Chromecast was the Fast Play option, which allows for an algorithm to predict what you’re most likely to watch and pre-load the programs while you are still viewing something else. While I did get some use out of it, and for many people it is sure to be a great feature, it was a little hit and miss for me. More than likely this algorithm will be a little more refined in coming updates.

As stated earlier, at $35, the value of the Chromecast is nothing short of astounding. Being able to do everything that the Chromecast allows, and at under half the price of the competition, this is a fantastic entry level streaming device, especially for those who are a bit thrifty or the average college student. Between the solid construction and aforementioned features, I would say that the Chromecast would still be a value even if it were at $50.

All things considered, I would put the new Google Chromecast on top of the list for streaming devices if it’s your first one, or if you want to keep on a low budget. For the price, it’s the best product out there without question, and easily rivals products twice or three times the price. While there are some drawbacks in terms of content (and the subsequent difficulty of implementing “DIY” solutions), this can be overlooked without a second thought. Overall, I would give the Chromecast an 8/10, and highly recommend it for those who want to keep the cable cut but not skimp out on entertainment.

You can check out the google chromecast by clicking here.