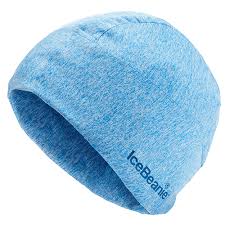 IceBeanie was founded in 2017 by Nic Lamb after he had an accident, resulting in a concussion. Nic Lamb is a prime surfer; he travels around the world in search of the biggest waves. In 2016, Nic traveled to Portugal to master Nazaré, the biggest wave worldwide. While attempting to take on the wave, Nic ends up wiping out. He suffered from a concussion, which eventually led to terrible migraines.
While recovering from his concussion, Nic used ice packs to relieve the migraines; however, he often found himself frustrated with having to hold the packs up. From then on, he started brainstorming ideas and soon came up with an easier and more effective alternative. Knowing how beneficial compression and the coldness of the ice packs had helped his pain, he decided to combine the two, creating the IceBeanie.
After using the IceBeanie himself and seeing how successful the product was, Nic developed his first prototype at the beginning of 2020. Shortly after, he started successfully selling the beanies online.
Simply put, the IceBeanie is just a beanie with gel ice packs inserted inside. The product is one size fits all and it can be adjusted with the velcro strap to ensure the beanie fits how 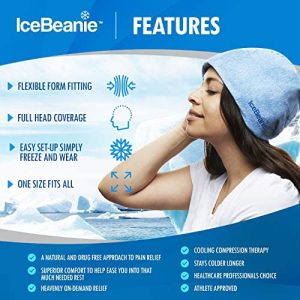 customers want it to. Not to mention, it couldn’t be easier to use. Just stick it in a freezer for about and hour before using it.
But how does it work? Many studies have shown that coldness is highly beneficial for many things; fevers, migraines, hangovers, etc. When the gel packs are frozen, the coldness basically takes over, making you focus more on the cold than the pain. While the IceBeanie is practically tricking you in this way, it’s also working to reduce inflammation and swelling within the painful area.
Since the launch of his product, Nic had made about $100,000 in sales. He’s proud of his product as it has helped him tremendously with his migraines so that he can continue his surfing legacy. He believes, with the amount of people who suffer from migraines, the IceBeanie will become a popular item. However, wanting to make sure of that belief, he decided it was time to dive deeper. At this time, Nic’s goal was to appear on Shark Tank and secure an investment with a shark.

On February 12, 2021, Nic Lamb appeared on Shark Tank in search of $50,000 for a 20% investment in IceBeanie. After asking them, “Who’s ready to get cool and invest in Ice Beanie?”, Nic introduced the product to sharks. He played a video of his incident with the large wave, as well as briefly explaining his past to them. Following his pitch, he handed out a beanie to each of the sharks for them to try on, while he explained that the patent for the design was still pending.
Mark Cuban exclaimed that the IceBeanie felt good, with Robert Herjavec nodding in unison. Kevin O’Leary joked about the product, asking if it grows hair before asking about the market for a product as such. O’Leary follows up by asking “how many people would wrap their head in ice?”, which Cuban then responded, saying “anybody who thought it would work would do it”. 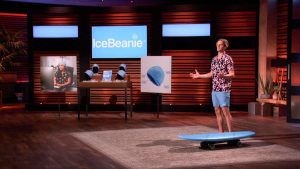 As an add-on to his initial pitch, Nic explained the marketing of the product in response to O’Leary’s question. One IceBeanie only costs $7 to assemble, with its sales price being at $39.95 each. Nic goes on to say that 40 million people in the US experience migraines; given that, IceBeanie is a sure-fire product to invest in. But, does that mean a shark will agree and invest in the business? Let’s find out.
Herjavec begins by asking Nic about the products lifetime sales. In response, Nic explains that, since launching the product, the business has made $100,000 in sales. He then goes on to tell the sharks that he marketed IceBeanie to the UFC athletes, Olympic athletes, and CrossFit athletes in order to increase its revenue.
Before hearing from the interested sharks, Kevin O’Leary and Lori Greiner back out. O’Leary believed the product wouldn’t sell too well, while Greiner was more focused on which companies may compete with IceBeanie.
Cuban was still interested in the product, so he makes an offer of $50,000 for a 30% investment while claiming that Nic would be a great partner for $50,000. He adds that he would market the brand by stocking the IceBeanie’s in the NBA Dallas Mavericks locker room. While Cuban’s offer seemed pretty fair, Nic asked him if he could consider decreasing from a 30% investment to a 25% investment. Right away, Cuban agreed to the terms and Nic accepted the offer. 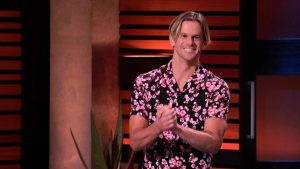 However, after much silence from Daymond, he chimes in asking “so you’re sure you didn’t want to hear my offer?”, with Herjavec following with, “i had a great offer”. John stated his offer to be $100,000 for a 25% investment in IceBeanie. The two sharks went on to try to convince Nic that he was making a mistake by accepting Cuban’s offer so soon; however, he disagreed and wasn’t keen on changing his mind.
“I accepted Mark’s offer. I have to honor that”, says Nic in response to John and Herjavec. With that, Nic’s appearance on Shark Tank was a success, resulting in him leaving with a $50,000 offer for a 25% investment in IceBeanie.

IceBeanie Now in 2023 – The After Shark Tank Update

After Nic’s successful pitch on Shark Tank and his deal with Mark Cuban, they completed the deal in late 2021. IceBeanie has reached a $200,000 valuation and has been doing great in business, with an extended $550,000 in IceBeanie sales. They’ve even had an actress, Geena Davis, and an influencer, Brooke Ence, purchase the beanies.
While it has not been confirmed at this time, it is believed that Nic is working with Mark on expanding the market for IceBeanie to reach more consumers, such as chemotherapy patients. As of 2023, the product can be purchased on their company website, icebeanie.com, as well as on Amazon and Etsy. It can be purchased at $39.95 for one IceBeanie, $71.91 for two, or $127.84 for four beanies.
Share
Facebook
Twitter
Pinterest
WhatsApp
Previous articleTikTok Sued Over Deaths of Young Girls Trying ‘Blackout Challenge’
Next articleFormer Prime Minister of Japan Shinzo Abe Shot Dead During Campaign Speech