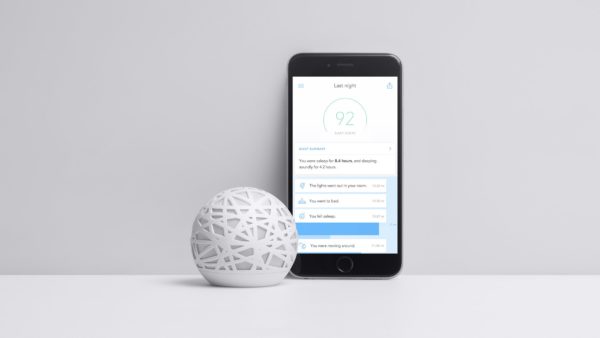 These days, it can be very difficult to get a decent night’s sleep. With the stresses of work that often follows one home, of keeping up with all the news of the day, and of course the constant shining of the light of smart phones and computer screens throwing our circadian rhythms off beat, very few of us can manage a restful 8 hours. That being said, while technology is at least partially to blame for our lack of sleep, it can also be a helpful aid in restoring a proper balance. Here, we will take a look at the Sense and Sleep Pill by San Francisco startup, Hello.

Rationale behind Sense and Sleep Pill

If you are anything like me, upon ordering and opening up the box, you’re going to face a very valid question. How on earth does an object that looks like a very fancy nightlight and something akin to a button help you get some shut eye? Well, it certainly won’t sing you lullabies or make you a cup of warm milk, but it will give you something that if used correctly can be far more useful: Data.

The Sense (the neatly designed sphere) is, as the name implies, a sensor. Measuring light, sound, temperature, humidity, and even the amount of dust and dander in the air, it can send this information to an app on your smart phone and compile the data, as well as provide active feedback based on color. If the ball lights up green, then you’re good to go to bed; if red, there’s a factor that will inhibit your sleep and affect the quality greatly; and yellow means the conditions could be better, but it’s manageable. As for the sleep pill, it for all intents and purposes is a small accelerometer used to measure your tossing, turning and waking. This of course also feeds onto the app to give a more comprehensive view of your sleep

With the how out of the way, let’s see if the Sense and Sleep Pill can back up their claims and can justify their price of $130 to $150.

The Skinny on the Sense

When I received the Sense and Sleep Pill, the first thing I noticed was the size and design of the Sense. It’s not as large as one might expect; easily fitting into the palm of the hand. That being said, its design is artful and chic enough to draw a bit of attention, while still finding a place in nearly any bedroom décor. Primarily composed of plastic, there was a slight concern over if it would break from a fall from the dresser. This concern turned out to be without real cause, as on the second day of testing a cat with a rather Newtonian curiosity happened to be able to paw it off the corner dresser, leaving no damage to either itself or the Sense, but giving the writer a minor heart attack in the process.

The second component, the Sleep Pill, was incredibly small. Not much larger than a quarter in diameter, and only slightly heavier, this could easily be forgotten if it wasn’t for the adhesion process of getting the device onto the pillow. Do note that you can in fact use two pills per Sense so that both you and a partner can monitor sleep patterns. While it’s clear that the design choice was perfect for a standard thin pillow case, if there is any sort of thickness, setting the Pill in may prove to be an issue. If this could be resolved with an adhesion piece more like an alligator clip, where thickness can be variable without causing significant frustration, this would be a major improvement.

Lastly, the app itself. Made for both iOS and Android, it seems to function quite identically for both. For the purposes of this review, the Android app was used, however testing it on a friend’s iPhone 6 yielded no noticeable changes. The displays are incredibly easy to translate, and overall design is clean. The app itself runs reliably and opens quickly, having not crashed during my testing period.

Functionality and Ease of Use

To start with, set up was significantly less than ideal. Though the app itself was well designed, the set up procedure produced a few hang ups. First of all, trying to connect the Sense and accompanying Pill to a WiFi network, even when sitting inches from the modem and phone, took over half a dozen attempts. The most common error was a brief connection period and an almost immediate timeout of connection. After a total of two resets of the network and phone, and seven overall attempts, the connection to the Sense finally stuck. From that point on, zero issues were noticed.

After set up and updating the Sense to the latest software version, getting acquainted with the feedback system the Sense provides is as easy as giving a wave. By swiping your hand near the Sense, it’ll send you a heads up on the condition of your sleep environment through the aforementioned red, yellow, or green color code. While this was certainly easy to see in the dark, it wasn’t so bright as to be obstructing to sleep if someone happens to flick their arm during sleep.

Unfortunately for the sake of this testing period, I was unable to ever achieve what the Sense calculated as an ideal sleep condition, as their sensor for humidity tended to be fairly strict. That being said, it was a neat feature that by simply checking the app could give me the exact reason for why my night may not be ideal. As per temperature measurement, the sensor seemed fairly accurate, being within 2 degrees Fahrenheit of other thermometers.

Of all the features claimed by the Sense, I was most skeptical and subsequently impressed by the particulate sensor. Having an air filtering device, during the first night leaving it off and then turning it on within the same room of the Sense gave significant enough variance to warrant at least an idea of accuracy.

When it came to post-sleep testing, a few features stood out exceptionally. Of these, the smart alarm was my personal favorite. The Sense has a unique setting that allows for the user to set a deadline time to be awake by, and the Sense will monitor your sleep using both itself and the Sleep Pill to estimate your sleep stage and wake you during the lightest sleep stage within about 30 minutes of the deadline time. I was a little skeptical about the idea of getting up earlier to feel refreshed, but when morning came, it turned out a little over 6 hours of rest was significantly more effective at leaving me refreshed than 6 and a half. Additionally, the waking tones are much more gentle (but can gradually increase in volume) than the blaring of standard alarms, which makes for a much gentler wake up.

Finally, when it came around to examining the data collected throughout the night, the app proved wonderful. While I did only have a small amount of time to get sample data, the app succeeded in giving me plenty of variables to examin

e with a decent degree of accuracy. These included all the aforementioned sensor categories, as well as my tossing and turning through the night, and even general estimates of when I fell asleep and woke up. As it turns out for data junkies like myself, you can extract these variables in an Excel document file and if you’re so inclined, run statistical analysis of your own (though recursive analysis on anything less than a month of data would be a bit heavy handed). Of course, it would seem Hello does a good enough job already, as they provide a breakdown of each factor and gives a “grade” to your sleep, using aggregate data from other users.

Overall, I could say that I quite liked this dynamic duo. While the Pill could be designed better in terms of placement capabilities, it seemed to be sensitive enough to capture the information it needed to, and the Sense ball itself is not only functional but pretty stylish. However, I wouldn’t mind a more sturdy construction, especially for the price. Even having just the outer shell made of aluminum may set minds at ease for the accident prone. For design, I would give both a 7/10.

In terms of function of physical components, I would give the Sense an 8/10. Once I got it to connect and performed the updates that were recommended by fellow users, it worked like a dream. Likewise, the interaction components were gentle and much better than the standard alternatives. That being said, the initial set up was much harder than expected, though this could just be due to my systems at the time.

When considering the sensors, the app, and the subsequent data, I’d say this product gets a 9/10. It is as accurate as it needs to be for nearly every scenario, the app itself is wonderfully designed, and the ability to export data is a great touch. I would like to see a little bit more customization in terms of setting up environmental parameters for what is “acceptable” in terms of humidity and temperature, but that is more a matter of personal taste than anything. The fact that it has the ability to use analysis to predict what nights I will sleep best, and when during said nights, was a great touch.

In closing, I would say that if you have a significant amount of disposable income, and have any sort of concern about your sleep, the Sense and Sleep Pill by Hello is worth the buy at its current price. However, I can’t see myself justifying its price to the average consumer, as nice as a product as it is. If it were to drop by 15-20% however, I would shout its praises from the rooftops, as then not only would it be a great piece of tech, but a fantastic value.

You can click here to see all the discounts and current deals on the Sleep Pill at Amazon.com