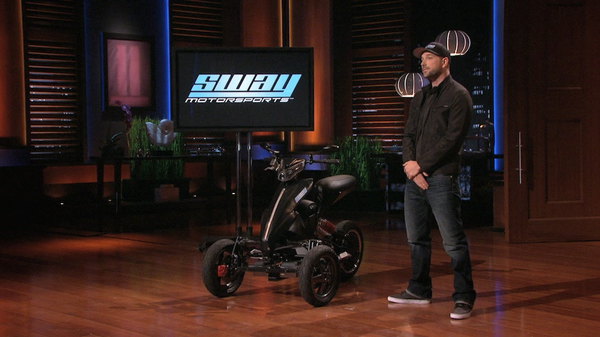 Zipping into the Shark Tank is Joe Wilcox, the owner of Sway Motorsports. Joe is seeking an investment of $300,000 in exchange for 10% of his company. Joe explains, he zipped into the Shark Tank on the Sway, which is a new mode of transportation. Compact, stylish, and of course, all electric – Sway is a thrilling motorcycle with added safety, utility, and maneuverability that make it perfect for your average community. The secret is in the swaying technology, which is a patented technology by Joe that allows for the user to sway and tilt the vehicle with your hands and feet, while keeping battery mass close to the ground for ultra stability.

Joe then illustrates his point by turning on a television behind him, which displays the Sway in full use outside. The Sway has caught the attention of guest Shark Nick Woodman, the founder and owner of the GoPro action camera. The Sway can zip around tight turns and decelerate quickly, and is a fully competent little vehicle in its own right. Since there is no necessary tilting of the body, the user can carry a passenger or load up their Sway bike with cargo, such as a from a trip to the grocery store. The Sway functions on snow, mud, and ice, and the driver never has to put their feet down during traffic or stop-and-go traffic. 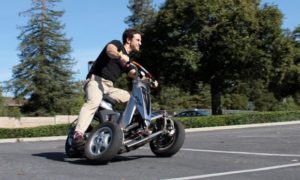 Kevin immediately asks how much it costs to buy a Sway, and Joe explains that, on the Sway website, it costs $7999 for the 60-mile an hour, 40-mile range version. What Kevin is seeking to do with the money from the Shark Tank is find an OEM manufacturer, which is an Original Equipment Manufacturer that is a maker of a part used in another company’s product; with this OEM manufacturer, Joe will team with a distributor that will manufacture and distribute the bike and essentially create a dealership program. Joe is actually in-talks with a high-volume manufacturer, and are talking with several high-volume manufacturers to create a licensed deal.

Mark asks how many pre-orders Joe and the Sway have received, and Joe says that so far, they have deposits that reach upward of $350,000, and those units will be delivered within a year, with the correct manufacturer, Joe explains; the manufacturing is why he has come to the Shark Tank. Daymond asks for more details about the design of the Sway, and Joe explains that he is the maker of the Sway and full owner of the company and is based out of Alto Palo, California. He is a designer and inventor in the toy and design industry, and is actually part of a firm that does design across the globe. He has major works which can be seen in many toy aisles across the United States.

Lori says that she feels like the Sway is the ultimate toy for anybody – men and women. She then asks about the requirement of operating the vehicle, or if you  need a motorcycle license to drive the Sway. In California, you do not need a motorcycle license specifically to operate the Sway, Joe explains. Nick asks about the total investment to get a working prototype, to which Joe says is around $100,000 to $200,000 – not bad, considering the prototype looks like a working consumer product. Mark has a huge grin on his face, to clue the viewers in.

Joe has several patents for the Sway, one of which includes a method which takes the battery mass of the vehicle and uses the bottom platform as an integrated stability platform and this charges most of the required tools – there is no visible hardware on the steering portion of the Sway. This leaves the top end open for storage and modifications; do also keep in mind that this is a patented technology that cannot be duplicated. Lori then asks how easy it would be for somebody to get around the patent and achieve the same technology, which Joe replies would be a lot harder than just licensing.

Kevin admits that everything is interesting about the Sway and Joe, but he drops the bomb and says that the market has been in development for about a decade. With his investment in Sway Motorsports, Kevin would be purchasing an option that require another decade of waiting to see if Sway and Joe are successful in finding a manufacturing and distribution partner because as an investor, Kevin needs all of those things to come together in order for Sway to be successful. This is also keeping in mind that the market needs to find some success and take off for the average consumer, as well.

Joe says that he is talking to over five manufacturers who are interested in working with Sway, but Kevin has already made up his mind – he exits the deal quickly. Nick Woodman then offers his inputs; it is hard to drive home the ease and utility of the vehicle to your average consumer who might find that the Sway looks intimidating, but the average person is not going to look at the Sway and be interested since they are already not interested in a motorcycle. Educating the consumer who isn’t already inclined to riding motorcycles or scooters is hard, but Mark disagrees; in Silicon Valley, every techie kid drives a motorcycle or a crotch rocket or some form of electric motorized vehicle. Even in San Francisco, this is a common trend.

One challenge Daymond sees is distribution, and the next is maintenance – people are going to ride the Sway a lot, so who will get the parts and be the ones to maintain it? There is a long, hard road to success for the Sway, but as an investor, Daymond is out. Nick then says that Joe reminds him of his early days at the GoPro, where they had a simple invention and his dream was to license it to other companies who would go and do all the work since he didn’t know how to build the business since he was just an ideas guy. Nick was actually in talks with Kodak cameras, but Kodak backed out and Nick was disappointed, but ultimately, he found a lot of success and built up GoPro. Nick sees Sway as a similar opportunity, and Mark agrees. 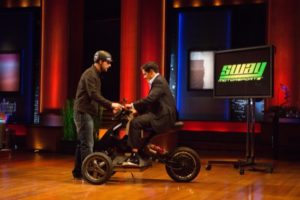 Going on about licensing, Joe explains that to find licensing or a joint venture for the capital investment would eventually buy the company’s loyalty. Mark explains that the Sway is a binary product, as it’s either a huge success or it doesn’t exist. However, the problem is that sitting down and explaining the Sway to your average customer is a huge challenge, but Mark is a tech guy, and not a motorized vehicle guy. So, Mark is out as well.

Nick sees something in the Sway, and says that he sees Joe as a passionate and that Joe should surround himself with people who share the same vision and can help to organically grow the business, but ultimately, he cannot invest and find the return on his investment in a timely fashion. Nick Woodman is out, as well.

Lori is the  sole remaining Shark, but Lori does not see what she could bring to the table other than finding connections and making phone calls to sales people. However, she sees Joe as someone who is already doing that and undergoing the hustle to find success for the Sway, so she really would just be sucking up profit. Lori is the final and last Shark out, leaving Joe without an investment for Sway Motorsports.

Mark then explains to Joe, there are people who have come into the Shark Tank who have stood on the carpet and have had a second chance to come back and present their business after undergoing some growth. Nick explains that the Sway is the future, but Joe asks, why not invest? After some conversation, Mark offers for Joe to make him an offer. Joe gives $300,000 in exchange for 20%, which Mark takes a moment to think about, then accepts. Mark and Joe strike a last-second deal in the Shark Tank, which is uncharacteristic for someone as stoic as Mark.

Sway Motorsports Now In 2022 – The After Shark Tank Update


The company received more than $1 million worth of pre-orders after appearing on Shark Tank. They even landed a partnership deal with Govecs, a German electric scooter manufacturer, that would put the Sway into production. From the looks of it, however, it never happened.

According to Heavy, the first Sway scooters were originally expected to be ready in the summer of 2016, however, that never happened. They later announced that it had been delayed and that it would come out in the fall of 2017. They also revealed a faster prototype, which had a 2018 release date, but that didn’t happen either.

The Sway Lithium was, however, listed on Shopify for a short period of time; it was listed for $9,999, which included a 10% environmentally-friendly vehicle update for US citizens, and reservations were available for a $5,000 deposit. As far as we can tell, however, nothing came out of it and it’s unclear whether or not those who pre-ordered the scooter were refunded the deposit.

When we dug a little deeper, we found out that the $300,000 deal with Mark never went through. Given that, our best guess is that the company ran into some financial issues, which prevented them from manufacturing the scooters. Of course, this has never been confirmed. In fact, the company never gave any updates. It wasn’t until  2018 that we found out what happened—that they had closed down.

Interestingly enough, however, their website is still up as of 2022. You can still read about the Sway Lithium and its specs and even watch videos about it, but that’s about it. There’s no way to order the scooter nor are there any updates about its release. Even if you click on the ‘dealership’ link, it just sends you to a generic form where you can enter your contact details for updates. There’s also a newsletter that you can sign up for for the latest updates but we’re willing to bet that that also hasn’t been used in a while.

The same goes for their social media pages. Take their Facebook page, for example, it hasn’t been updated since June 2017 (their last post talked about test riding opportunities in Menlo Park and had actually generated a bit of interest). Prior to that, they posted about pre-orders in May 2017. That’s not all, their Twitter account also seems to be abandoned (they last tweeted in 2017).