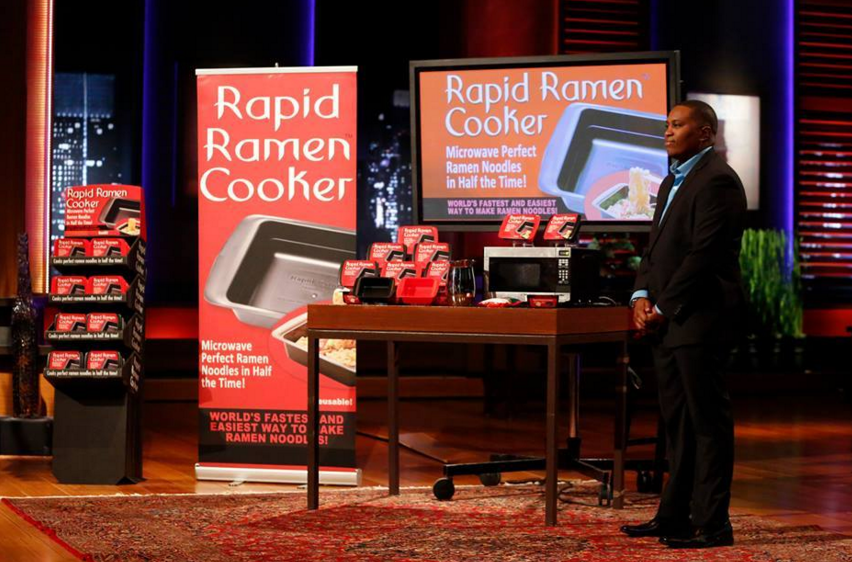 The Rapid Ramen Cooker is a product founded by UC Davis Alumni Chris Johnson. Like many college students, Chris ate ramen back in the day and wanted to find an effective way to cook them in the microwave for the convenience while still getting the stove top quality taste. From his experience, Chris knew that excess water was the key issue when microwaving ramen noodles so he created a unique square shaped bowl, the same size as a block of dried noodles, complete with a water line that allowed the noodles to cook perfectly.

With a background in business and an investment of $500, Chris was able to take his idea from prototype to high street, by selling them at his college bookstore in UC Davis. With this proven demand, Chris pro-actively reached out to retailers himself who agreed to carry the product, allowing him to found his own company. Wanting to grow the the brand, Chris applied to be on Shark Tank and was invited on for Season Five.

Chris entered the Tank seeking $300,000 for 10% of his company. Chris gave a background about how ramen noodles are a college staple, yet they don’t come with microwavable instructions. He then presented his solution in the Rapid Ramen Cooker and how the bowl was shaped exactly like ramen noodles. Chris demonstrated how simple it was to use the product by just adding the noodles to the bowl, filling water to the water line, and then cooking it in the microwave. He passed out samples to the Sharks and allowed Barbara to taste some noodles that were cooked in the Rapid Ramen Cooker.

Mark was the first to mention his concern of why one would not simply use a bowl in the microwave and even though Chris disputed that one would not get the same taste from a bowl, Mark argued that this doesn’t matter to college students because they would be drunk! Barbara argued that it would matter and the conversation moved towards the business itself. Chris mentioned he had over $150,000 in sales in less then one year and the product was in over 2,500 retailers that he got into without any connections at all. This impressed all the Sharks, especially Mark and Lori, as most come on to the show hoping to get help from the Sharks to get into retail. The cookers sell for $5.99 and Chris made them for less than $1.00.

Kevin wondered what would stop anyone from making a similar product and Chris stated he had a patent pending although the Sharks questioned if the cooker could be patented or how easy it could be to knock off. Barbara wanted to know more about Chris’ background and Chris stated he has been an entrepreneur all his life and how he has grown multiple businesses one of which to over $1,000,000, but was now focusing his time on the Rapid Ramen Cooker. This, however, upset Mark more than impress him because he felt Chris was not fully dedicated to  the businesses he starts, if he is constantly starting new firms. Mark seemed to feel it made investing in this new business more risky. Who knows when Chris would abscond to start a new company?

Although impressed with Chris, Lori’s main concern was that the product could be easily copied and because of this, she went out. Kevin and Mark brought up how a $3,000,000 valuation made sense and Chris mentioned that he felt they would do $2,000,000 in sales next year and that the money would be used for inventory. He also felt the product and business had so much potential to grow both online and in retail. He also stated that if someone offered him $3,000,000 for his business today, he wouldn’t take it. However, Mark thought Chris would be a fool for not taking that kind of money for his business and went out as well. Barbara was impressed with Chris and the product by saying the noodles tasted just like if they were cooked on the stove. However, she felt the company would not grow as big as he stated because the cooker was a onetime buy meaning once a customer buys a cooker from Chris, they have no reason to buy another one unless it is for something like a gift. With this concern, Barbara went out.

Kevin also felt that because the product was a onetime buy, it would eventually die off and that if Chris spent all the investment on inventory, he would have a hard time getting his money back. Because of this, Kevin offered Chris a deal of $300,000, but wanted $1.10 for every cooker sold until the loan had been repaid, with $0.40 in perpetuity, which led to laughter from Mark. Robert was impressed with Chris, but also did not agree with the valuation so he offered Chris $300,000 for 40%. Kevin asked Chris if he understood both offers and he mocked Kevin on his offer before walking outside and making a phone call. While he was outside, Kevin and Robert talked and decided to go in together on the deal, where they would lower the equity ask to 25%, but keep the royalty deal in place.

After walking back in with tons of concern on the offers, Kevin and Robert proposed their new offer. However, Chris immediately declined saying he could not give up that much equity or a royalty for where his business was. Mark asked how much equity Chris was willing to give up and Chris mentioned that the max he would do is 20%. Hearing this, Mark came back in and offered Chris the $300,000 for 20%, but half of it would be a loan with interest payments. Kevin and Robert tried to discuss the negatives of taking a loan, but Mark also argued, if his company grew as large as he hopes, the loan would cost him less than a royalty. Chris countered Mark for 15% with the same loan arrangement and told Mark he would put in his full effort to get him his money back. Seeing the potential and passion in Chris, Mark accepted the offer and Chris left happy that he got a billionaire as a partner.

Rapid Ramen Cooker 2022 Update – Where Is the Company Now?

The company saw a huge boost in sales after the episode aired. At one point, they were receiving 25 orders per minute – and mostly multi-pack orders. Allegedly, this lasted well through the weekend and into the week after their Shark Tank appearance. Their retail sales also skyrocketed.

However, the deal with Mark Cuban was never finalized. However, that hasn’t stopped Chris from taking the company further. For one thing, the Rapid Ramen Cooker is now available at Walgreens, CVS, HEB, and Raleys nationwide.

In 2016, he also signed a licensing partnership with Nissan Foods, the company that created the original instant ramen. If anything, that led to a huge boost in sales. That’s not all, he also landed licensing deals with Nickelodeon and Disney, which allowed him to put their characters on his products. He also signed a deal to have logos from various U.S. colleges represented on the ramen cookers, which were released in the fall of 2016.

He also created a new product called the Rapid Mac Cooker, which is designed for cooking mac and cheese instead of ramen. Currently, it’s available from Amazon as well as retailers such as Walmart and Target. And like the original ramen cooker, it’s available in various colors from blue to orange. It’s also a bit cheaper at $9.99 instead of $10.99.

On top of that, he’s also created a Rapid Rice Cooker that allows individuals to cook perfect rice in just three minutes and a Rapid Oatmeal Cooker that cooks perfect oatmeal in less than half the time. Both products are also available from Amazon for $9.99.

As for the original Ramen Cooker, it has received rave reviews. On Amazon, it currently has a 4.5-star rating out of more than 20,000 reviews, with many customers praising it for its durability and ease of use. However, some have stated that they tend to boil over, which causes spilling in the microwave. As far as we can tell, though, that doesn’t seem to be a widespread issue. If anything, it all depends on how long you microwave the ramen noodles.

As of 2022, the company is still going strong. The last that we’d checked, they were earning $5 million in sales with more than $55 million in lifetime sales. Given that, it’s probably fair to say that Chris is doing fairly well for himself.