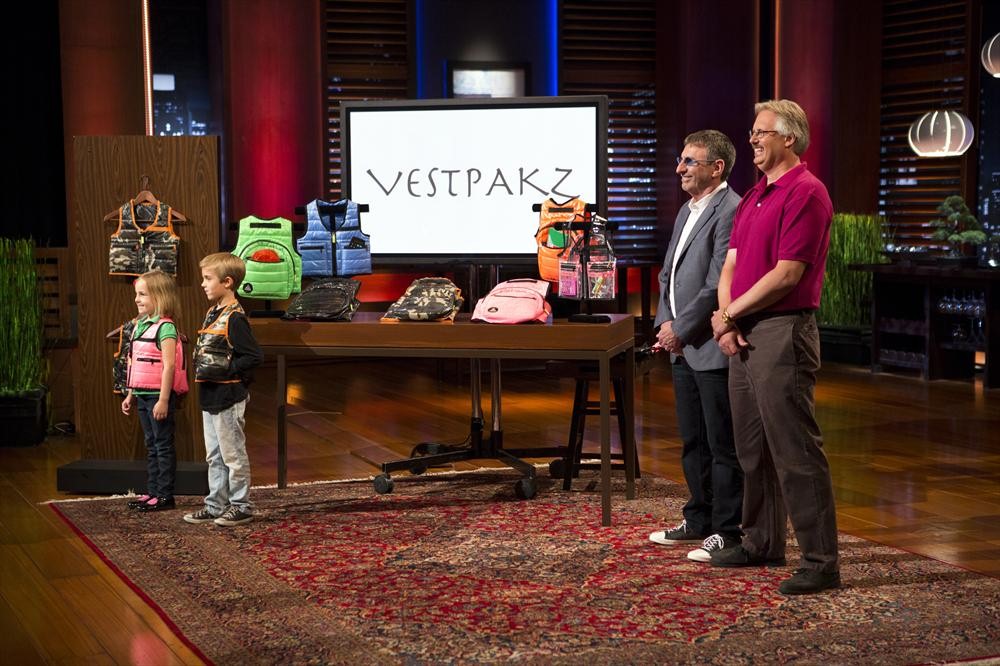 Michael Woolley and Arthur Grayer, two members of the board of directors of the VestPAKz company, have just stepped into the Shark Tank. Michael is the chief financial officer, and Arthur is the primary licensee, and they have come to the Shark Tank to seek an investment of $50,000 in exchange for 10% of the company. Arthur starts by saying that VestPakz was actually invented by his daughter when she was only in 6th grade. Her teacher gave his daughter a simple science project – find a problem and come up with a solution. So, his daughter found that backpacks were heavy, and thus created a new backpack that is more comfortable, convenient, and stylish than traditional knapsacks.

VestPaks are a combination of a vest and a backpack that has a functional design which helps to evenly distribute the weight. Michael has actually been in the backpack business for over 30 years, and has never seen a product like the VestPak. Michael pitches his final statement that, with the help of the Sharks investing in the VestPak, they can start to put a whole lot more money in the front pocket of the vest. This prompts Kevin to immediately move towards sales, as he has had a grumpy look on his face the entire time of the segment.

In January and February, there were approximately $10,000 sales worth, which is not a lot of money as the Sharks point out. Robert then asks about the relationship of the two men, wanting to clarify, and Michael confirms that he owns the rights of the product who then licensed the product to Arthur who sells the product. Arthur is the only one able to sell VestPAKz legally, actually. The two children that came into the Shark Tank and Arthur then pass out samples to each Shark, giving each Shark a lollipop in addition to the vest.

However, grumpy Kevin says that it would be best to get rid of the kids since things are about to get ugly in the Shark Tank. Robert then asks for additional clarification; the way the system works is that Arthur purchases the product, then pays a fee towards Michael. Robert asks for the fee, which Michael reveals to come out to 6 and a half royalty. Upon questioning from Mark, Arthur reveals that each VestPak sells for around $14 to $30, depending on the model – the model that Mark has actually sells for $14.88, and cost around $4.75 to make. Robert asks for the total sales over the lifetime of VestPakz, but Arthur prefaces with a small story. 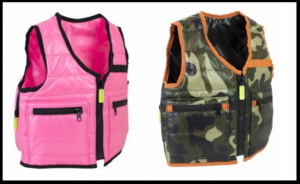 Last November, Arthur starts, they signed a licensing agreement and had the product in a Big Box store (Wal-Mart) for January and February. The products would be in 75 stores, but the weak sales showed that there was, in fact, little interest in the VestPakz product. Arthur would have loved to gotten the product out before the holidays, but the reality was that they would not finish production until after Christmas. Wal-Mart has not committed yet to re-ordering VestPakz, and Arthur says that he needs to see what will happen during the “back to school” period in July through August. At this time, they will know if Wal-Mart will reorder.

Robert asks for Arthur to put himself in Robert’s shoes; Robert is an investor, and a company comes up and says that they made it into Wal-Mart but only managed to sell $10,000 of products in two months. This seems awful to Robert, but Barbara and Mark ask for the two of them to elaborate further and hopefully deliver some good news. Arthur says that there is good news since Wal-Mart could reorder since they have shown strong interest, but Michael asks to pause for a moment while he gives a little history about VestPAKz.

After Michael’s daughter invented the product, she actually won her sixth grade science contest. The product went on to the “Million Dollar Idea Challenge,” where the product was actually put on Oprah Winfrey’s show. Barbara points out that they still only $10,000 worth of product despite making it into both Oprah and Wal-Mart, but this was way back in 2003, Michael reveals. Michael’s daughter is now 27 years old, which causes all of the Sharks to burst out laughing or stare in disbelief; Robert believed that the children who entered into the Shark Tank with Michael and Arthur were Michael’s kids.
Mark is distraught, and he voices his concern; Michael made it sound like VestPAKz was a new product with lots of momentum, and since Michael brought the two kids and mentioned that his daughter was in sixth grade, Mark and all the other Sharks have believed it to be a series of recent events, and not a series of events over 10 years. The Sharks want to know why there is a delay of 10 years, asking what happened, and Kevin jokes that Michael’s daughter was in product development and took a while. All of the Sharks are losing focus and seem to be laughing at the lackadaisical nature of Michael towards a potentially very profitable venture.

However, Lori asks why there is a huge block of time where nothing happened, and Michael reveals that he did not have the funds to start the business and go buy enough inventory. Mark points out that his daughter is now 27 and she was 11 when VestPAKz was started, which prompts Robert to ask that the two men behind VestPAKz understand the lapse of credibility over 16 years. Mark even agrees with Robert, saying that things would have been far better had the two men immediately told the Sharks upon their entry into the Shark

Lori then asks about sales over the last 16 years, moving on to more important investment matters, but again, Arthur reveals that the only sales of VestPAKz have been the $10,000 sold in January and February. Kevin then speaks his mind, saying that when the VestPakz was invented, the “Mandy” style of backpack was still overly popular. Since then, nothing happened until VestPakz was put into Wal-Mart, and nobody knows yet if the product will be de-listed until the back to school season. This is what caught Kevin’s attention, as he does not think it is worth $500,000 until he knows that Wal-Mart will keep it again. Regardless if they come together now or in 10 years, Shark Tank and working with the Sharks will be but a blip on the entire history of VestPAKz thanks to how long the product has been around. Kevin jokes that if he went to the Smithsonian Institute and saw the VestPAKz, he would definitely regret not investing.

Michael actually says that the Smithsonian in 2015 to showcase the product, but Kevin focuses up and reveals that he is out of the deal. However, Arthur reveals that there is indeed a problem out there due to the heavy nature of school books. Through some testing, they proved that the VestPak genuinely does properly distribute weight and could help children carry their heavy loads. Robert points out that Michael seems like a genuine person and the two of them didn’t come out to mislead them, but he has a legitimate concern. The $10,000 in sales in 75 stores over 2 months is abysmal and alarming to an investor, especially when that product goes to Wal-Mart, the largest retailer in the world. The numbers just do not lie, and Robert is also out of the deal.

Mark likes the product, but the goal is to invest in the entrepreneurs and company and since VestPakz is already being licensed through Arthur, there is just too much gray area and too many question marks in Mark’s mind. Mark also exits the deal in short fashion.

Barbara and Lori are the two remaining Sharks, and Barbara mentions that she loves the product – it’s a twist on something that kids buy every other year. However, Arthur interrupts her for a moment, and Barbara points out that this is a sad case because it is the right product with the wrong entrepreneurs, and exits the deal.

Lori understands that the hustle and grind can get tiresome, but she does think that Arthur and Michael are doing well for themselves so far. The problem is, in her eyes, when the product goes to so many stores and are only selling $10,000 in 2 months, regardless of the Sharks finding the product a good idea or not, the consumers are speaking. There just is no desire to own a VestPak, evidenced by the low sales in two months at Wal-Mart, and so Lori also exits the deal as the final Shark.

Michael Woolley and Arthur Grayer do not find an investment in their company Vestpakz, and leave the Shark Tank heartbroken.

VestPakz Now In 2023 – The After Shark Tank Update

Without an investment, the company eventually fizzled out; they ultimately went out of business shortly after the segment aired.

They tried to make things work with a crowdfunding campaign but it didn’t quite work out. In the end, they only managed to raise $95 out of their $50,000 goal, which wasn’t nearly enough to keep the dream going.

Another interesting tidbit is that they didn’t actually have their own website. While they had their own domain, Vestpakz.com, it redirected to a site called Eastport, which sold the vest packs. As of 2023, however, the former no longer exists. The Vestpakz page on the Eastport site was also gone by the end of 2015, not long after their Shark Tank appearance.

The vest packs listed on the site were also marked as “out of stock” before they even appeared on Shark Tank, which is interesting, to say the least. Perhaps they sold everything after participating in the Smithsonian Innovation Festival? Or maybe they never had any inventory left? Who knows. For reference, however, they did have three designs for the Vestpakz—Black, Pink Sizzle, and Camo, all of which originally went for $19.99.

What are Arthur and Michael up to nowadays? Well, as it turns out, Arthur is actually the Senior V.P. of Sales and Merchandising at Eastport, the same company that had sold their vest packs years ago. In fact, he’s been working there for over three decades—since 1988 so he has a long history with the company.

While Vestpakz may no longer exist, the parent company (or what appears to be their parent company) seems to be doing well as of 2023. As far as we can tell, they seem to specialize in bags such as backpacks, totes, duffle bags, shoulder bags, and belt bags. Not only that, but they also have an apparel section that consists of hats, hoodies, tees, polos, and more. For those who are interested, you can check out Eastsport’s website here.

As for what Michael’s been doing, we’re not too sure. He doesn’t seem to have a LinkedIn account so it’s hard to know what he’s been doing. Given everything, however, we wouldn’t be surprised if he went back to his day job. Or he might be helping Arthur out with Eastport. For all we know, that might very well be a possibility.

One thing’s for sure though—we probably won’t be seeing them on the show again anytime soon. Not unless they come up with a new invention, at least. However, that’s probably unlikely seeing as how they’ve gone on to other endeavors.