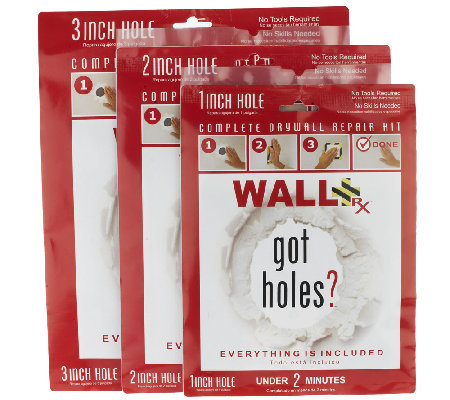 Repairing walls can be a messy task that often calls for quite a detailed clean-up. However, Wall Doctor RX seeks to change that by serving as an easy-apply patch that conveniently seals up any holes in the wall or any glaring issues in a simple one-step process. Read on to find out more about Wall Doctor RX, and if this amazing one-step fix is available close to you.

Jim Lewis is from Chester County, Pennsylvania, and Jim is the creator of the Wall Doctor RX. Jim is asking for $150,000 in exchange for a 10% investment in his company.

Jim starts by saying that he is a “wall-ologist;” a doctor that specializes in walls. Jim has created one of the greatest products in the world, Wall RX. To demonstrate how Wall RX works, Jim starts by saying that the user needs a hole – he smashes a hammer into a demonstration wall standing behind him. In order to fix the hole, you typically need a ton of utensils, including brand-name Spackle, which could potentially have dried up and become harder than the wall you need to fix. However, the consumer can instead just use Wall-RX.

First, like any good surgeon, the surface must be prepared – with the hole in the wall, the surface is prepared. Next, take the plastic cog-looking disc and place it over the hole. After this, take the frame with the special surface compound, then apply it over the plastic piece. That’s it! Within 24 to 48 hours, the hole should be mended and look conspicuous – just like a piece of spackled and repaired wall. No tools, no skills, and no mess. Jim then calls up one of the Sharks to demonstrate, and Lori steps up to break a hole in the wall and use the Wall-RX.

Kevin asks what happens if the hole is large – say, four inches in diameter. Jim says that’s a great question, so

the user would simply purchase the four-inch hole repair system; the Wall RX comes in a variety of sizes starting in a 1×1 inch patch, working all the way up to a 6×6 inch patch. Robert asks what is proprietary about the Wall RX, and Jim says that Wall RX has four full patents. Robert asks if Jim is really a doctor, and Jim explains that he is actually indeed a forensic pathologist – for a living, he sees dead people, as Robert points out. Daymond asks about sales, and so far, Jim says he has sold 80,000, and their gross sales were $600,000. The projection for the upcoming year is half a million to a million. Jim explains that he knows that you can drown in success; he has had people come to him and say that they want the Wall RX in their stores, and he even just met with one of the largest retailers in the world who said that they wanted the Wall RX. However, Jim told them he cannot do it since he does not have enough capital and must automate the process more; he feels confident that at the current stage, he would fail.

Lori asks about price, and Jim says that each unit sells for $4.99 to $6.99. Each unit costs him to $2 to $2.50 to make. With the investment Jim receives in Shark Tank, he intends to buy machinery to automate his process. Daymond asks what Jim does with his life, and Jim says that he has two full-time jobs; the Wall Doctor, and a regular doctor. Kevin points out that that is a very hard thing to do, and he should know that if he wants to continue forward, he will have a choice to make – he is either going to have to deal with the largest retailer in the world himself, or hire someone to do so. Kevin says that Jim is stepping into the big leagues, and he needs the experience to support that.

Robert is the first to make an offer, explaining that he has a lot of international connections that look to Robert to help fill up their retail space. Robert makes an offer of $150,000 but with no equity – instead, Robert wants control over the international sales. Jim can keep all the United States sales – Robert simply wants control of the international rights of the product. Kevin fires back with his own offer of $150,000 for 15%, with the single contingency that Kevin wants to license the technology and give it to a company that is global and can handle worldwide distribution. This would allow Jim to remain a doctor and receive a paycheck every month.

Daymond makes an offer, as well; he offers $300,000 for a 15% stake, and has a contingency similar to Kevin’s, where he also wants to outsource production and create a licensing deal. Lori creates an offer next, offering $300,000 for a 20% stake in her business. Lori says with her deal, the Wall Doctor RX can move to QVC and infomercials and make it a global brand with lightning speed. Jim is a bit flabbergasted, as he has received offers from four Sharks so far. 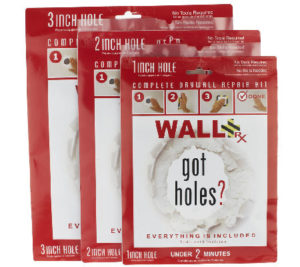 Jim says that he likes Robert’s idea the most since he can also help take care of the rest of the world, but Daymond points out that every one of the sharks can help Jim move into international production. Kevin says that when he takes a product to a manufacturer, the manufacturer does not like to see any international territory excluded, and Lori agrees, but instead of manufacturers she insists that infomercial companies also like to advertise products at the same time all over the world. Kevin says that, “Robert’s offer is effectively radioactive waste.” At this point, Mark speaks up, having been mostly silent for the entire deal. Mark says that he is the entrepreneur’s advocate, and not the people’s advocate, so for that, he is going to go out, but he is also here to answer any questions Jim may have.

Jim speaks up, saying that he wants Lori and Robert to work together. Robert’s deal is phenomenal, but he wants the two to work together so he can not only work on taking the product international but also get the product onto marketing television where many more units can be sold. Daymond interrupts, asking if Jim is effectively saying no to his and Kevin’s deal – Jim looks lost for a moment, but then admits that yes, he is declining Kevin and Daymond’s offer. Instead, he wants Robert and Lori together. Jim keeps insisting that the two of them need to work out a deal in order for this deal to work, but Lori says that she cannot work out a deal with Robert since she has a structure in mind for her idea. Lori would take the product to a marketer who would then set up a structure, and would want most of the exclusive rights over the product – without that structure, the deal cannot work.

Robert asks about what the counter offer is, and Jim says that his counter-offer was to make an ultimatum that both Lori and Robert work together. However, after some deliberating, Jim insists that he wants to take Robert’s deal, but Robert refuses to close on the deal. Robert says that he doesn’t want to be the cousin at the dance – his offer didn’t change all the way through, and Jim said that he only wanted to take Robert’s deal if Jim took Lori into it. Daymond asks if Robert is declining, and Jim begs for Robert to stay in the deal. However, Robert remises and accepts the deal with Jim, giving the Wall Doctor RX an investment of $150,000 for no equity but also receiving an international rights deal.

As far as we can tell, the deal with Robert was finalized. And despite having turned down Lori, Wall RX also showed up on QVC. Perhaps she took a bite of the product after the show aired? That seems like a possibility.

That’s not the only place that snapped up the product either. Wall RX also became available at Lowes, one of the largest home improvement stores in the world. In the United States alone, there are more than 2,100 locations. And after a while, their competitor, Home Depot, also picked up the product. That’s not all, some pharmacies and smaller stores also began to sell the kit, according to the store locator page on their website. Needless to say, the product was a huge success.

A few years later, the business was acquired by Spark Innovations, LLC, a company that “acquires and develops consumer product brands and launches them into retail”, according to their LinkedIn page. They had previously acquired FiberFix, Illumibowl, and ScreenMend, all of which were also featured on Shark Tank. Details on the acquisition have not been released but we do know that they renamed the product from Wall Doctor RX to Wall Doctor.

And for a while, the Wall Doctor was available on Amazon (it had a 3.5-star rating on the site across 1,000 reviews). Many customers praised it for being convenient and easy to install; they also felt that the directions were easy to follow. As with all products, however, it did receive some negative reviews. For one thing, some people felt that the filler compound was difficult to use. Others claimed that the plaster didn’t hold properly, which rendered it useless.

As of 2022, the product has been pulled from Amazon. When we looked into it, we found out that it happened sometime between late 2021 and early 2022. Don’t worry, though, you can still get it from other retailers such as Home Depot, which currently has it listed for $39.98. It doesn’t seem to be available anymore at Lowes, however. The product’s official website has also been taken down.

What is Dr. Lewis up to nowadays? We’re not exactly sure but we wouldn’t be surprised if he went back to being a medical examiner seeing as how that’s what he was doing prior to inventing the home repair kit. As for whether or not we’ll be seeing him back on the show, we’re going to have to say no- not unless he comes up with another business idea, anyway!