The Green Garmento Update From Shark Tank – Find out Now 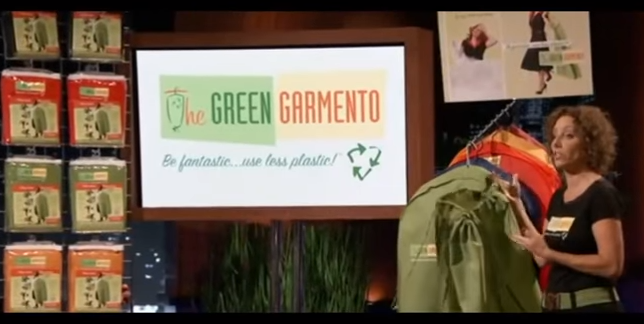 The Green Garmento before Shark Tank

Unlike some entrepreneurs who come on the Shark Tank, Jennie and her husband decided to make the Green Garmento their full-time job after they invested money into the business. With this dedication and commitment, Jennie and her husband were able to grow the business and get a good amount of gross sales before coming on the show. However, they were not profitable yet and had other investors waiting to be paid back as well. Needing financial help and wanting to market her product to the millions of Shark Tank viewers, Jennie applied to be on Shark Tank and was invited for Season Four.

The Green Garmento on Shark Tank

Jennie entered the Tank seeking $300,000 for 20% of her business. Jennie began by explaining the challenges of finding clothes inside plastic dry-cleaning bags and the damage that the 1.4 billion plastic used by dry cleaners causes to the world. She than presented her solution in the Green Garmento as her bag acted as a hamper that one could put their clothing in. The product could than turn into a bag that one takes to the dry cleaner. Jennie concluded with how the product transforms into a hanging bag that gently holds ones clothes. Kevin was interested in how he would make money and Jennie gave a background of how big the market is before mentioning she would gross over $400,000 by the end of the year. Jennie also mentioned sells a majority of her product to the dry cleaners directly who then sell the bag to the customer. The bags sell for about $4.00 and cost less than $2.00 to make. Robert was concerned with the hassle dry cleaners would face when customers brought their own bag. Jennie countered this argument by saying the bag will actually save the dry cleaner money as they will not have to buy plastic bags.

Daymond wondered if there were any competitors and Jennie mentioned she had a patent on her bag, but there was one competitor who marketed their bags to the consumer rather than the dry cleaners. Barbara brought up the benefits of plastic bags being clear and the simplicity of seeing what clothes are in each bag, something Jennie’s bags lacked, but Jennie went back to the benefits her product has such as neatness. Kevin wanted to know how much Jennie would profit this year, but Jennie stated she would lose money and had not profited the four years she’s been in business. Jennie was losing $10,000 a month. With this concern now known, Daymond wondered how much debt the company has and Jennie mentioned she has non-equity investors. She raised $900,000 from them after investing money herself; however, the investors get 9% revenue of sales until they’re paid back which stunned all the Sharks.

Robert now wanted to know how much Jennie would have to reach in sales before she could pay these investors back, but Jennie did not know the answer. Mark and Robert both brought up the concern of how she would ever pay back the debt which Jennie also did not have a clear answer to. Because of this, Robert went out. Despite her earlier comments, Barbara actually thought the product was clever, but felt investing would be like buying into a problem so she also went out. Kevin actually brought up merits about the product and how people do not want to help the planet, which Jennie’s product does, if it costs them money because they are greedy. Because of this, Kevin went out.

Mark brought up a statement about how entrepreneurs always say “if they had the money” without realizing the huge disadvantages that come with obtaining money through debt in the long-run which Jennie had come to realize. Because Jennie fell into the debt trap, Mark went out. Daymond stated he wasn’t upset with Jennie because he felt she had a passion to start the business and saw the debt as an opportunity, but how her business has now turned from a cleaning bag to a “body bag.” With the same concerns as all the other Sharks, Daymond also went out.

The Green Garmento after Shark Tank

Despite the Sharks assumptions, Jennie was not only able to keep her business alive, but grow it after airing on Shark Tank. Along with expanding her product to over 1,000 dry cleaners, Jennie also began selling her product to numerous online wholesalers such as Walmart and Bed Bath and Beyond. The Green Garmento’s sales are increasing by over 60% each year over as Jennie sold over $500,000 in 2014. Jennie has also been interviewed by numerous other outlets since airing on the show, another common benefit from airing on the show, including JP Selects and Green Living Guy. It is unknown if Jennie has paid back her non-equity investors completely or if she was able to find other equity investors after the show aired. Nonetheless, she has done a great job of digging herself out of the hole she was in when airing on Shark Tank and continues to grow her business each year.

The Green Garmento can be bought directly from the company’s website at https://thegreengarmento.com. Numerous other online outlets sell Jennie’s product as well including Walmart.com, Bedbathandbeyond.com, and Amazon.