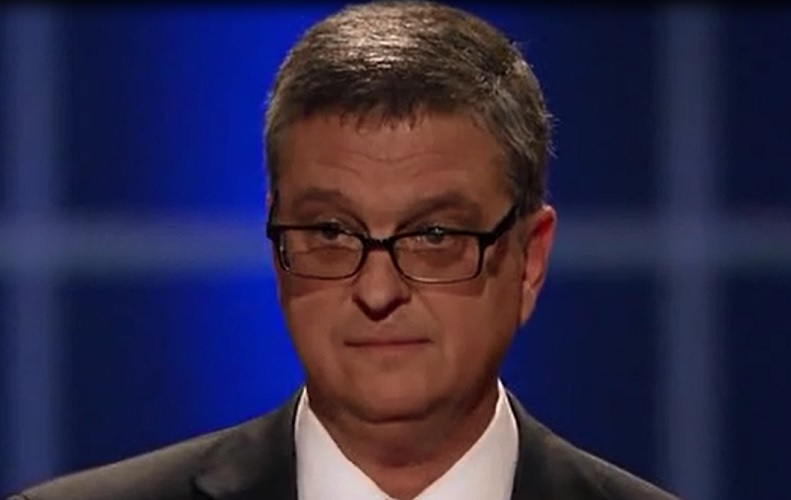 Dan Rothwell had a promising and impressive career. The electrical engineer had been employed in the power utility sector and had been involved in fusion research and laser technology. He had already achieved financial security but he walked away from his stable future to pursue his entrepreneurial ambitions. After conceiving of the idea at a family gathering where food was present outside, he used his engineering knowledge and experience to design and patent Dura Tent, a full-enclosure tent to keep food safe from flies.

He began his enthusiastically delivered pitch starting with an explanation of how many diseases and germs flies would typically transfer to food left out in the open. He went through a slightly stomach-churning description of how flies pass on germs and also showed a short video illustrating the point even more graphically and clearly.

Dan had a matter of fact way of speaking but the subject matter was clearly making some of the sharks a little nauseous. Dan finished up his pitch by informing the sharks that 1,000 people nationwide were hospitalized annually due to salmonella and antibiotic resistant E Coli, some of the cases inevitably proved to be fatal. Dan had the solution in the war against the flies however, and that solution was the Dura Tent. The tent fully enclosed the food it protected, it had a Velcro door flap to completely seal food in, and it was easy to set up and to clean. Dan revealed the Dura Tent to the sharks and laughter rang out, mainly from Kevin O’Leary.

‘Are we going camping in that thing?’ he asked Dan gleefully.

Mark Cuban spoke up quickly, wanting to get back to business ‘How many have you sold?’ he asked. Dan explained that so far 50,000 units had been sold. Mark and Robert both seemed impressed by that, Mark asked what the cost per unit was.

Dan explained that the smaller Dura Tent retailed at $19.95, the larger, banquet version of the tent went for anywhere between $30 and $35. Robert asked about the manufacturing cost of the product. Dan informed him it was $4.65 and $7.27 for the tent and the banquet respectively.

Robert asked where most of the units had been sold, County fairs was the instant answer from Dan.

Lori Greiner had seen similar products available and she wanted to know what made the Dura Tent different. Dan stressed that his product was a full enclosure, unlike other products. It wouldn’t blow away and it fully protected the food within, the Banquet version was larger that any other product used for a similar purpose.

Robert Herjavec asked how Dan had originally conceived the idea. Dan, who was smartly dressed in a suit on the show, detailed his electrical engineering background as well as his impressive career history in power companies and laser research. He explained that he had sold his interests in those fields and walked away to follow his dream of taking a product from inception to the consumer market. He had had some ideas for the technology involved and was inspired to create the Dura Tent at a fly besieged family picnic.

‘So you went from Laser blasting aliens to fly tents’ Kevin summarized, ‘I Love it’ he added.

Everyone seemed quite impressed with the Dura Tent so far but things were about to get heated for Dan.

Mark Cuban wasn’t so impressed with Dan’s resume that he failed to notice some discrepancies in what the sharks had been told. A business with a 300% profit margin combined with $140,000 in turnover should have left Dan with a huge bottom line. He confirmed the figures were correct with Dan, who agreed they were. Mark asked where the huge profits were.

Dan informed him that the previous years sales had been mostly wholesale rather than retail. Mark asked for a breakdown of the figures, presumably meaning a ratio between wholesale and retail sales, but Dan looked under pressure and seemed to misunderstand the inquiry and just listed the sales figures for the first three years of business.

Dan was looking increasingly hot and bothered, it could have been because he had tried to pull the wool over the eyes of the sharks with inflated sales figures or perhaps it was because he had got his calculations wrong under the pressure, but Mark Cuban saw the irony of the situation and happily pointed out ‘An engineer that comes on national TV and can’t do his math’. Dan didn’t join the laughing.

The Engineer turned entrepreneur was looking more stressed with every passing second, even more so when Daymond joined the throng of sharks throwing questions about sales at him. Dan was speechless for a moment and then apologized for the error. He took a moment to recover from his momentary loss of speech and then amended his estimated sales figure to 35,000 with a total of 40,000 expected by the end of the current trading year. Lori looked satisfied, pleased to have got to the bottom of the sales figure mystery, but Dan still looked hot and bothered.

Kevin asked if Dan had a patent on the Dura Tent products. Dan confirmed that he had three patents on them.

Mark Cuban asked what the $50,000 investment would be used for. Dan explained that he had showcased the Dura Tent products in several trade fairs, including the National Hardware Show and had received interest in placing large wholesale orders from several large retails chains. In order to set up a distribution network to supply such orders Dan would need to invest in storage and logistical facilities to keep things running smoothly.

Robert Herjavec didn’t like the Dura Tent, he claimed not to really understand the need for it and he didn’t have any interest in the business, he wasted no more time and was out. Dan thanked him for his consideration but he was starting to look a little grim faced by now.

Mark Cuban spoke up quickly. He complimented Dan on the Dura Tent itself, he thought it was well engineered and fundamentally a good product. But stating somewhat cryptically that he ‘couldn’t add value to it’ he also left the negotiations.

Kevin didn’t follow the trend, ‘I believe you’re going to sell a bunch of fly tents, I really do’ he said encouragingly.

Dan, mopping sweat off his brow thanked Kevin for his words. ‘Don’t thank me yet, you haven’t heard my offer’ Kevin replied, slightly ominously.

He was prepared to give Dan the full requested investment of $50,000 but he didn’t want any equity in the company, instead he wanted royalties on all the units sold. With a royalty of only $2 on the smaller Dura Tent and $2.50 on the banquet tent, he would start to see profits by the third year if sales remained constant. As always when pulling a surprising offer on a pressured shark tank entrepreneur, Kevin made his offer sound generously reasonable.

Dan clearly didn’t view the offer the same way, he didn’t accept it, and began speaking about how his appearance on Shark Tank wasn’t just about the money, it was about joining up with a shark with ‘marketing vision’ as he described it. Dan looked a bit lost by this point and seemed to be waffling slightly.

Kevin suggested that Lori could join him in his offer and she would supply the marketing vision that Dan was seeking. He asked her if she liked the structure of his deal, but she didn’t

She did however confirm that she was considering some sort of offer in conjunction with ‘Big Shark Daddy’ Kevin as she called him, but first she had a few more questions for Dan.

She asked about the name of the product, she thought it was nondescript and didn’t explain the function of the Dura Tent very well. She suggested that a name like ‘Fly Be Gone’ or No More Fly’ would have been better at marketing the product.

Dan launched into another jumbled monologue about his consultations with marketing companies and the exact reasoning behind the name, but he didn’t make a lot of sense. Lori listened for a while before explaining her problem was not only with the name, but with the look of the product as well. On top of these issues, she also had one big problem with the business as a whole, she couldn’t see that there would be much demand for the product. She seemed to finally make up her mind in mid-sentence as she mentioned the lack of demand and she confirmed she was also out.

Dan still didn’t look too enthralled by the only offer made to him, Kevin’s royalty only deal. He looked hopefully towards Daymond for another option.

Daymond however wasn’t going to be providing one. He admitted to having been on the fence over the Dura Tent Business but Lori’s instinctive feeling that the Product wouldn’t be a large seller was good enough to put him off of the idea. He also dropped out, leaving Dan with only Kevin’s offer left open to him.

Kevin asked if Dan was turning down his offer, Dan waffled about marketing some more and mopped his brow again. Although he still didn’t turn the offer down flat, he clearly wasn’t ready to accept it. Kevin had finally had enough of Dan’s failure to give a clear answer. He withdrew his offer, and apart from promising to buy one tent from Dan at the full retail price, he joined the other sharks in dropping out of the negotiations, and Dan was left high and dry.

As Dan left the shark tank, Mark Cuban called Kevin’s offer ‘A Terrible Deal’ and Daymond agreed. Kevin defended it and claimed it was a great deal, but the other sharks weren’t buying into that either.

Dan Rothwell looked increasingly lost as his appearance on Shark Tank progressed, his fairly direct and well presented pitch was a good start but by the time that the sharks were dropping out he looked stressed out and sweaty. His answers to the sharks descended into inarticulate rambling stories that led nowhere, and he refused the only offer presented to him without giving a credible reason, although the other sharks did seem to think that he’d made the best decision there.

That aside, Dan’s a clever man, with a fairly good and potentially life-saving product. He did take one thing from the Shark Tank for free, and that was Lori’s advice that another name might be better for Sales. In January 2014, less than a year after his Shark Tank appearance, Dura Tents were discontinued, and the far more attractive and improved PicnicPal was born. It was the same product, but it looked better, the advertising shots were more tasteful and classy, and it had a much better name. The PicnicPal business seems to be moving along nicely under Dan’s sole guidance. He might not have taken the company to the next level just yet but it is showing steady sales growth and a healthy balance sheet.

You can buy PicnicPal products in a variety of places online, although I couldn’t track down too much information about which stores I could pick them up from in person. There are many complimentary remarks by satisfied customers who all seem to agree that its a great product. Dan didn’t keep the Sharks off his back in the Tank and the pressure showed, but he bravely and probably wisely avoided a doubtful deal with Kevin O’Leary. There are no flies on Dan Rothwell.