If you own an iPhone, you’re probably used to using iTunes as your go-to management software. On paper, iTunes does everything that it’s supposed to do. It lets you back up your iPhone, manage data, and troubleshoot any issues that you might have with your device. In reality, however, iTunes has a bad tendency to fall short of expectations. The interface is confusing, it’s kind of unstable, and it offers a lot of seemingly arbitrary limitations on how you can configure your iPhone. Still, a lot of people use iTunes because they feel like it’s their only option. I’m happy to tell you that that isn’t really the case.

Tenorshare iPhone Care Pro is a fantastic all-in-one iPhone management and maintenance software, offering a variety of features and functionalities that allow users to maintain and improve the performance of their iPhone. Basically, it does everything that iTunes is supposed to do. In this article, I’m going to talk about those features and how well they work. I’ll also talk a little bit about how this third-party stacks up to iTunes. I’ve jabbered for long enough — let’s get right into it.

If there’s anything to be said about iPhone Care Pro, it’s that it fits a lot into a small package. There are multiple features to this software, making it one of the more versatile third-party iDevice management tools when it comes to advanced systemcare for ios. However, it’s worth noting that some of the features are more effective than others. Let’s take a closer look. 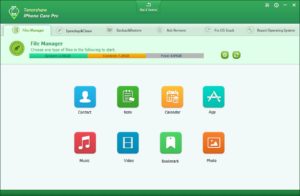 File Manager: This particular feature is simple, but powerful. The File Manager allows you to manage your iPhone’s contacts, calendar, notes, videos, music, photos, and apps. One of the biggest issues that I’ve always had with the iTunes interface is that it’s so hard to get to device file management. iPhone Care Pro lays it all out in a really simple, effective way. You’re able to easily export and import media files from your iPhone, and you’re also able to make backups for specific files and apps with the simple click of a button. This software scores major points for simplicity with this feature.

Speedup&Clean: Speedup&Clean has a really clever purpose. Have you ever plugged in your iPhone and noticed that half of your system space is being taken up by what iTunes describes as “other”? Some of “other” is things like system files, which can’t be deleted. A lot of it, though, is junk. Things like old cache information, save files, cookies, and so on. Just generally stuff that you don’t need. This particular feature scans your iPhone for these junk files and deletes them, improving performance and freeing up space.

Backup&Restore: This one is pretty self-explanatory. With the click of a button, make a backup of your iPhone. If you want to, restore from a pre-existing backup. Although I don’t think making backups on iTunes is particularly difficult, I like how iPhone Care Pro’s backup system lets you look at multiple backup files. Maybe you deleted an important something a few months ago without noticing, and you unknowingly delete the backup that stored it. Backup&Restore would let you save that old backup, which I think is cool. 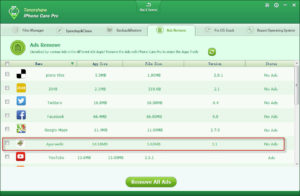 Ads Remove: One of the more “glamorous” tools that iPhone Car Pro has to offer. Ads Remove is basically meant to remove ads from your apps. Whether that means ads that play on Pandora or ads that pop up while you’re in the middle of playing a game, this feature is meant to block them entirely. Not only does this make your iPhone experience a lot less annoying, but it also speeds up your device’s overall performance.

Fix iOS Stuck: Troubleshooting is one of those things that I think iTunes does horribly. If you have an issue with your iPhone, you’re going to inevitably spend a lot of time picking through support forums, or sitting at a Genius bar. iPhone Care Pro lets you easily pull your iPhone in and out of recovery and DFU mode, which makes potential troubleshooting and general “behind-the-scenes” work much more doable.

Repair Operating System: And in the event that your troubleshooting still fails, Repair Operating System lets you completely nuke your device. It allows you to directly import (and download) firmware packages to let you “refresh” or otherwise repair your operating system. Hopefully, this will allow you to return your iPhone back to a usable or ideal state.

So, as you probably know, it’s really easy to make promises in terms of software. All of those features sound great and all, but do they really do what they say? For the purposes of this review, I tested out some of these tools on my old iPhone 4S. This device was pretty much the perfect machine for the job. I’m mostly an Android guy, and I haven’t used it for a really long time. It’s old, it’s slow, and it doesn’t work nearly as well as it used to. It’s been through a lot — going in and out of being jailbroken, multiple firmware updates, and general wear and tear. The perfect candidate.

First, I experimented a little bit with the files manager. My old iPhone had tons of old music on it, and I had never gotten around to fumbling with iTunes to get any of it off of the device. The process was as simple as clicking a checkbox next to the song I wanted to export, clicking ‘Export’, specifying a file destination, and waiting. The process itself was really fast, and the quality of the sound didn’t seem to be affected. I was really impressed by how easily this all carried out. I was personally able to export around 20 songs in just a few seconds. I know that pulling music off of iDevices has always shown to be a difficult process, but iPhone Care Pro makes it easy. 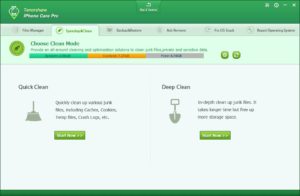 Next, I went into Speedup&Clean. This particular tool allows you to choose from a quick or deep clean. I opted for the quick clean, since for whatever reason iPhone Care Pro kept crashing when I tried to do a deep clean. I was more than satisfied with the results of a quick clean, however. I was shocked to find that the software discovered over 300 MB of junk files, which I very quickly deleted.  Especially if you’re dealing with an iPhone that has a smaller amount of storage, this kind of space makes a huge performance difference.  (During the process of attempting to do a deep clean, backups of my iPhone were created. Although I wasn’t blown away by the ability to create backups, since that’s a fairly standard feature, I still liked it. In my opinion, the backups were created faster than backups are generally created on iTunes.)

Perhaps the most controversial feature for me would have to be Ads Remove. I had very mixed results with it. It’s intended to completely remove advertisements from apps that you have installed on your device. I’m honestly not entirely sure how Tenorshare is able to do something like that, so I was very curious to see how it worked. Although I found that ads were successfully removed from YouTube and Asphalt 8: Airborne (which Tenorshare advertises on their website to begin with), I wasn’t able to remove ads from other popular apps like Stack or Color Switch. This seems to be a pretty hit-or-miss feature, which was mildly disappointing, but the small successes are still neat. 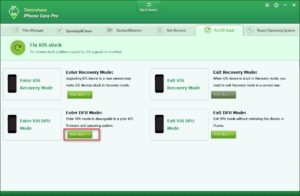 Finally, the two troubleshooting features. Although my iPhone wasn’t actually broken, I fiddled around with them a bit. In Fix iOS Stuck, it was really easy for me to jump in and out of DFU and recovery mode, which I appreciated. If I were trying to experiment with different firmwares or dealing with a bug, those would prove to make things a lot easier. I also decided to download a firmware package from Repair Operating System, which was a smooth process. The 1 GB download didn’t take very long, and it was all very easy to understand. Overall, I think they’re solid tools.

iPhone Care Pro has a demo version that you’re able to try out, but the majority of the features are locked behind a payment wall. Price of admission? A personal license costs $59.95, although they’re currently on sale for $29.95. If you want to be able to redeem your license key across more than three computers, however, the unlimited license normally costs $599.95. Although $60 is fairly inexpensive as far as software goes, it may still be a tough pill to swallow. Is iPhone Care Pro worth that kind of money?

I’ll cut right to the chase. Yes. You have to consider that what you’re paying for is multiple tools, consolidated into a single convenient package. There are definitely other forms of software out there that do similar things, but I don’t think that there’s a software that exists that does all of the same things. It’s a single software that you can consult for a variety of different issues or needs that you may have, and it does what it needs to do in an efficient and easy-to-understand way. iPhone Care Pro is the Swiss army knife of iPhone maintenance software, and I think it’s well worth what you’re paying for.