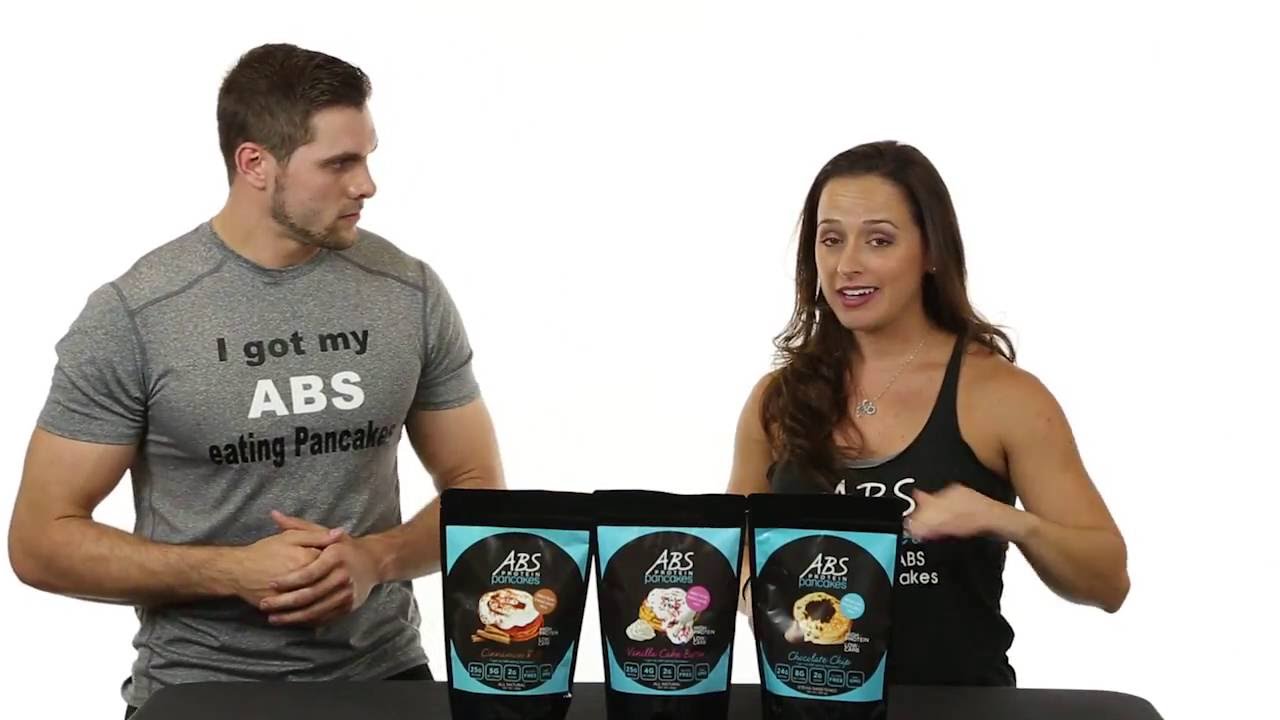 Ashley and Josh created ABS Pancakes to make healthy eating more appealing, both for themselves and for their customers. Would the Sharks be sold on these protein pancakes? Let’s take a look. 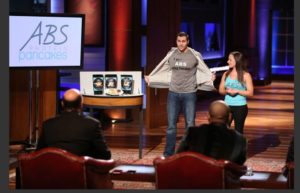 An athletic woman and a fit-looking man entered into the Shark Tank. Ashley Drummonds and Josh Mcclelland introduced themselves and informed the Sharks that they were from Tampa Florida. They wanted $120,000 for their company, ABS, in exchange for 40% of the enterprise. The pair started off their presentation by telling the Sharks that it was high time that they get healthy. To get healthy, a person would have to start eating correctly, cutting out sugar, fat, and sometimes flavor to meet their goals. Ashley gestured towards a plate of broccoli, Brussel sprouts, and literal cardboard as an example of what one might encounter on a typical diet. Josh sipped a protein shake next to the plate and commented that it was chalky. This had the Sharks laughing a bit to themselves.

Josh let the Sharks know that there was another option and spun the platform the plate of vegetables was on, revealing a plate of pancakes and a couple of packages of the ABS Pancakes mix. Josh said that you could get you abs while eating their protein pancakes, and lifted his shirt to reveal a 6-pack. Ashley let the Sharks know that the pancakes on the stage were only 250 calories for 4 of them. They contain 24 grams of protein per serving, and they are gluten free as well as all natural. Ashley asserted that abs start in the kitchen instead of in the gym. She said that you could enjoy the pancakes as part of a healthy lifestyle change.

Josh asked the Sharks which one of them was ready to invest in their company, and give pancakes back to the American breakfast as a viable, healthy option, “ABS-absolutely guilt-free!” The duo then asked the Sharks who was hungry and began to pass out samples. There was a moment of chaos as the Sharks all exclaimed at the same time. Lori assured the pair of entrepreneurs that they were always hungry. Josh and Ashley handed a plate of prepared pancakes to each Shark. The pancakes were each a different flavor, from chocolate chip to vanilla cake batter. Mark asked what the topping was that came with the pancakes, and Ashley informed him that they were sugar-free chocolate syrup and almond butter. The Sharks all tried the pancakes, and Mark declared that they weren’t bad. He said that the pancakes tasted like Angel Food cake.

Mark said that the more he ate, the more he got used to the taste and the texture. Robert asked how many calories were in his pancakes. Ashley said the serving of 3 pancakes is 250 calories. Daymond placed his pancakes down and wondered how they came up with the idea for ABS pancakes. Ashley told him that ABS stands for Authentic Beauty and Strength. She told that Sharks that both she and Josh were in the fitness industry. Before they went to their photo shoots, they had to diet to get to a certain weight and a certain look. Daymond wanted to know what role they had in the fitness industry.  Ashley let him know that they were trainers who both did photo shoots sometimes to build their portfolio.

Lori wanted to know how many bags of the pancake mix they’d sold so far, and when they started. Ashley told her that they’d been selling the pancakes for 11 months, and in that time, they reached $100,000. Josh said that they’ve 1600 units. Ashley cut in, explaining that most of those sales came from the website. Kevin asked if they had a lot of repeat business, and Ashley confirmed that they did. Mark said that the longer he eats it, the better it is.

Kevin asked them what their numbers were like, and what it costs to make one unit of product. He also wanted to know the retail price, as well as the profit margins. Ashley said that it cost them $12 to $14 to produce. The Sharks all looked flabbergasted. Daymond’s voice went up, and he exclaimed: “Clutch my Pearls!” Robert said that it was crazy, but Lori was very pragmatic. She asked if the high price was because they were making it in their home. Before they could answer that, Daymond wondered how much they were selling it for. Josh told them $42.95. The Sharks all looked outraged at this point. “$42 FOR PANCAKES?!” Daymond asked what was wrong with them, and said that their sales numbers came from selling 3.

Kevin said that the price point was insane. Ashley tried telling him that it was because he was thinking regarding Bisquick, but Kevin told her that he was just thinking in general. Ashley insisted that their market was the fitness market, who are willing to shell out more money to buy protein powder and other pricey items to stay healthy and fit. Kevin said that he could eat the pancakes or purchase a car. Lori asked why it cost so much. Ashley told her that they had to order small quantities since they didn’t have the money to order bulk. She said that the base is a custom protein blend that is all natural, so that had a higher price point. Lori clarified for the Sharks, say that she orders little amounts and makes it in their kitchen. Ashley stated that they have a co-packer that they pay to mix the ingredients and package it.

Mark wanted to know how low they could get the cost if they were selling millions of dollars worth of product. Ashley told him $7-8 a package. Mark said that the pancakes have expensive ingredients, but the types of people that would eat to pancakes would also pay that price. He told them that they’d done a magnificent job hustling their product, but they weren’t a business yet. He was the first to go out. Daymond said that there was a big challenge, and Kevin agreed, asking how they would value the company. Daymond stated that the valuation that they were asking for was reasonable, but he couldn’t get over the sticker shock from the $42 price tag. He said he didn’t know if it was possible for them to last at that level, and he went out. Lori told the pair that they looked great and that she understood the value of being healthy and looking good. She stated that she did not like the taste herself, and she needs to love the products that she gets behind. She also went out.

Robert said that he thinks their price is too high, but h did love the packaging. He stated that he saw the potential down the line for a product extension into cupcake mix, and other baking goods. He told them that he would make them an offer for $120,000 in exchange for 50% of the business. Mark groaned and shook his head. Daymond asked him why he’s done that. Robert didn’t have an answer. Kevin said that it was his money and his decision. Before Josh and Ashley could make a decision, Kevin went out. He stated that he did not understand it, and said that ABS Pancakes tasted like crap. Mark interjected to say that he liked them, and he cleaned his plate. Robert told Kevin that he either understood the fitness benefits, or he didn’t. Kevin stated that he was looking at it as an investor, and he thought it was a tiny market.

Robert insisted that he did not understand the industry. He called Kevin the “Before,” and said that he was the “After.” As seen on previous episodes, Robert is a health-conscious runner. The other Sharks laughed. Robert stated that they were still early. They did a good job so far, but he was looking at the long term. He repeated his offer. Mark asked him if he wanted to do that since he would be equal as responsible for challenges as Ashley was. Robert looked amused and said that there was a lot of noise from people who were not investing. He said it was fairly common in season 7. Daymond said that going 50/50 could bottleneck the company in case of a conflict. He recommended that they go in a 49%. Ashley asked if he would do 45%, he said he would go for 49%.

Daymond appeared to be considering. He stated that he would do 42% if they were willing to go in right now. Ashley said that she would do 42%. In their exit interview, Ashley seemed relieved. Back in the tank, Mark congratulated Daymond on taking a move from his playbook and swooping in at the last second. Lori asked why he had done it, and Daymond told hr he liked the pancakes, but initially thought that they were too costly. He thought he could bring the price down. Kevin said that he invested in poo-poo on a stick. It was all very professional.

ABS Pancakes Now in 2018 – The After Shark Tank Update 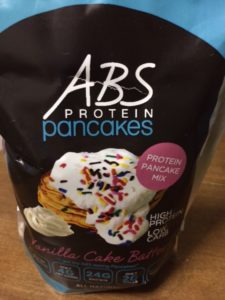 ABS Pancakes seems to be doing well since they got their deal with Daymond John. Ashley and Josh appeared with Daymond on an HSN cooking show recently, and they developed a new subscription service for their ABS Pancakes. You can save 15% by signing up for the monthly membership. Check it out on their website.