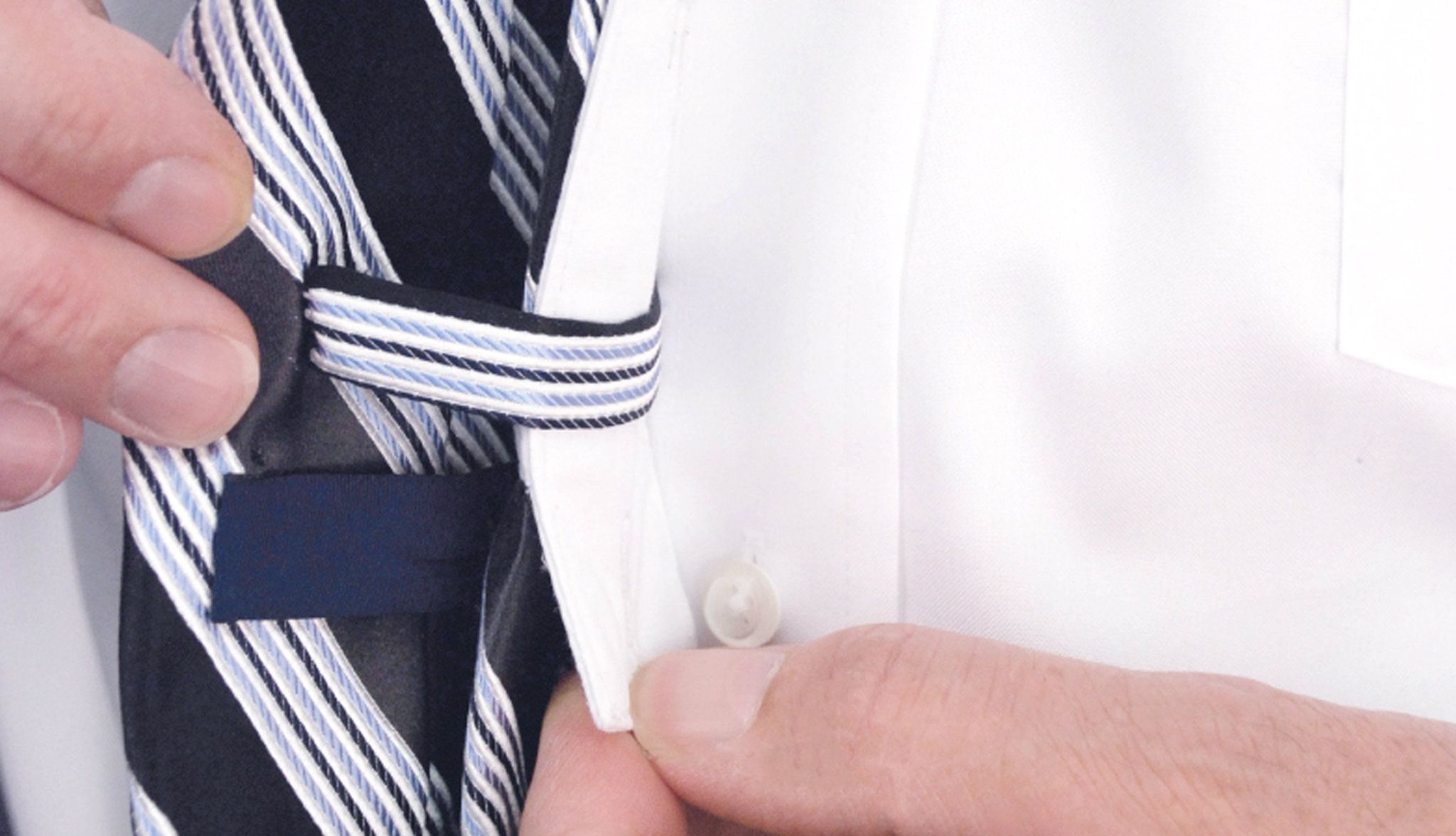 Before creating his product, the Total Tie Keep, Dwight Littlejohn was a Federal Agent who worked in Washington, D.C. He learned how to keep himself looking good at all times, and decided to mass market his product to assist others in doing the same. Will the Sharks see the value in this product, and bite on the chance to invest? Let’s take a look. 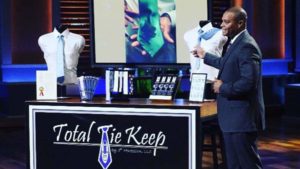 The announcement stated that a federal agent was entering the Tank with a way to look sharp and in control at all times Dwight Littlejohn introduced himself and let the Sharks know that he was a special agent based out of Washington DC. on the stage next to him was a table decked out in Total Tie Keep merchandise. He said that he was looking for $50,000 in exchange for 25% of his business. Dwight told that Sharks that he was required to wear a suit and tie every day as a part of his job as a federal agent. He said that he has to endure the challenge of maintaining a neat personal appearance in while dealing with some of the most influential people in the world.

Dwight continued, stating that it was hard to make a good impression when you have what he called “Bad necktie behaviors.” Mark and Robert looked amused. Dwight illustrated some tie mishaps, such as “the blowing benny” where the wind whips your tie across your face, and the “peeping Tom” where the rear part of the tie peeks out from behind the first bit. The next picture in the slide show was a green tie with a chicken parm stain on it, which Dwight claimed happened to him. Mark looked highly amused.

Dwight explained that his product is an accessory that keeps your tie in line. He said that while tie bars are fancy, they end up stiffening the link, and taking away the natural flow of it. He asked the Sharks to join him in straightening America’s ties. Dwight had samples for the Sharks, which he passed out as they started in on the questions. Mark asked him what federal agency he worked for, but Dwight stated that he was not allowed to tell him. Kevin laughed, as Robert pressed Dwight further, wanting to know if it was Secret Service or FBI. Dwight dodged him, saying that he would tell him everything once they signed a deal.

The samples that Dwight handed out contained four different colors so that customers could choose the right one that matched their tie, or their shirt.Dwight demonstrated how to use the product. This product attached to the buttons on the collared shirt, looped into the tie loop, and keeps the whole tie in a neat straight line. Lori wanted to know why the other Sharks hadn’t invented it yet. Kevin said that the product was pretty cool, which is high praise coming from him. Robert cut in, wondering how Dwight came up with this idea while he was on the job. Dwight said that he came up with it while participating in day to day activities. He and other agents need something called “command presence.” That means walking into a room, and being about to control that room without saying a word. Looking commanding is an important part of that process.

Robert asked Dwight to provide Kevin with some Total Tie Keeps since the back apron of his tie was hanging out. Kevin retorted that he always looked good, while Dwight told him that he could keep the samples. Robert wanted to know how much he sold it for, and Dwight said that the retail price is $25 for the four pack. He said the cost to him was only $3 for that same pack. Lori asked him if he has sold any, and he let her know that he hasn’t really. Mark stated that he was surprised since he had a great job to sell these at. Dwight said that was just the problem.

Lori told him that he was coming in with a concept instead of a proven business model. Dwight let her know that it was patented. He said that he sold a few online, and gave away samples to law enforcement that help him in his day to day job. Mark asked if the officers wear the Total Tie Keep, and Dwight said that they do. He did say that he’s exhausted his sales circle of people who he knows. Daymond asked him if he’s tried to wholesale the product at all. Dwight stated that he had attempted to get it into Men’s Warehouse. He ended up selling 200 units, and the product went on the back page of the Men’s Warehouse site. Dwight said that they didn’t do a good job of selling what they had. He insisted that it needs a tutorial for people to understand really what they were looking at.

Daymond said that the bigger issue was that he went to the largest company in that market space instead of trying to get into smaller stores first. Daymond stated that he probably would’ve done better if he went to a specialty store first. Dwight said that’s why he needed the Sharks to help him. Mark laughed and stated that he needed them because he doesn’t have any sales. Robert asked what the plan was since he has a full-time job that he wasn’t looking to quit. He wanted to know what Dwight planned on doing with the money, and who was going to go out and sell the product for him. Robert asked Dwight was would happen if the investors came through, and he got the $50,000.

Dwight said that he would use the money to purchase more materials. Robert asked him again how he was planning to sell his invention and Dwight repeated that was his reason for appearing. He seemed to require more hand-holding than the Sharks were willing to give. He said that he was asking for a little money for a high percentage of the company hoping to get assistance with sales. Robert looked frustrated and explained that someone had to be doing the work in the business on a daily basis. Dwight said that he could do that to an extent. Kevin stated that he couldn’t do it with a full-time job. He told Dwight that this was a splendid idea that is missing the infrastructure to become a great business.

Lori said that what he wanted was for someone to take the business over, either by buying him out or through licensing. Dwight stated that he couldn’t run the day to day operations at this point. Mark said that the reason he doesn’t wear a tie anymore is that he had to wear a tie every day he went to work in his first company. Once he sold the company, he never wore a tie again. Mark said that swag is being able to tell everyone around him what to wear, as opposed to what he is wearing. He stated that he wasn’t the right guy for the project, and he went out. Dwight thanked him. Lori said that she was also not the right partner for him since she could not relate to ties. She went out.

Dwight said that he’d taken the company far enough to be on Shark Tank, so that should mean something. Kevin let him know that he had a very good idea, but he did not have any sales. He was asserting that his valuation was $200,000 with nothing to back it up. Kevin said that he would have to get more than 100% of the company to make it work investing in the $50,000. Dwight insisted that his valuation was based on the inventory that he kept in stock. Robert let him know that it didn’t count if they weren’t currently selling. He told him this is not something you can do in your spare time, Robert went out.

Kevin said that he was primarily in it for the money. What he saw in Total Tie Keep was a hobby, not a business. He went out. Daymond said that he had to be out at this stage. In the post interview, Dwight stated that he understood that the sales weren’t high, but he was learning as he goes. Back in the Tank, Lori asked the male Sharks if they would use the product. Mark said that in the rare moments where he found himself having to wear a tie, he would use it. Kevin said that the problem with Total Tie Keep was that it cost more than Mark’s suit. Mark laughed and said not by much.

Total Tie Keep Now in 2018 – The After Shark Tank Update 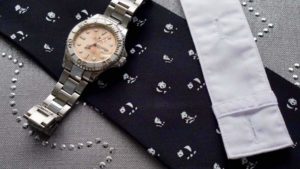 Dwight was not able to make a deal with the Sharks, but the business seems to be still going. You can purchase the Total Tie Keep on their website, or on Amazon. Customers appear to like it – they have 75% 5-star reviews. Total Tie Keep has an active Facebook page and keeps up with their 600 followers on there. It doesn’t seem like they’ve gotten the push they wanted from being on Shark Tank, but the business is still holding its head above water.