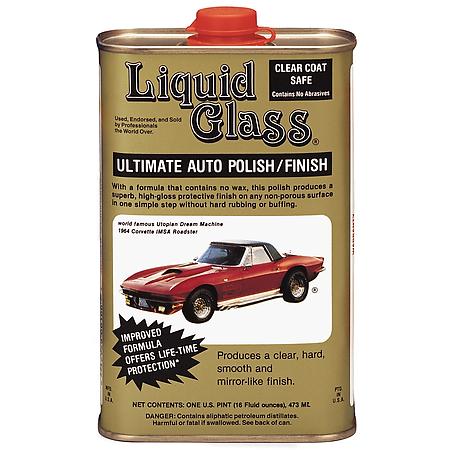 For many, summer time is the best season to show off your car with a thorough exterior cleaning, a detailed interior cleaning, and a good wax or polish to top it all off. In reality though, the polish an wax you use should be of yearlong importance. Worrying only about the appearance of your car in the summer is out of the question for any serious car enthusiast. To help you keep your car looking great year round we have compared here every major wax and polish on the market for what we will be referring to as the “Car Wax Showdown”.

Competing in this showdown we have Nu Finish Car Polish, Meguiars Ultimate Liquid, Turtle Wax Super Hard, Liquid Glass, and Chemical Guys Butter in that order. We will compare and contrast each brand so you can figure out which one is right for you.

Before we begin its important to clearly define what types of products we’re dealing with and the properties of each. Car waxes and car polishes are both used to give your car a clean and shiny appearance, a polish is used to give you that smooth shiny surface. A wax is a natural or synthetic treatment to temporarily barrier your car from UV rays.

For the most part waxes are virtually insoluble in water, meaning they won’t immediately disappear after each power wash or rain shower. Waxes have a standard melting point of 82-86 degrees Celsius, or 180 to 186 degrees Fahrenheit, so they will easily withstand high summer heats unless you’re waxing a satellite bound for our galaxies warmer planets.

Wax can come from many different organic or synthetic sources, from plants to petroleum the variety of waxes is truly astounding. Most automotive care companies utilize a specialized wax known as carnauba wax. Carnauba is derived from the leaves of the Brazilian carnauba palm tree. This wax produces a durable and very glossy finish when combined with other waxes. It smooths out the surface of the paint by filling in imperfection.

As opposed to the “filling in” smoothing done by waxes, a car polish uses an abrasive action to remove very fine uneven layers of the top coat to flatten out the surface and ensure that light reflection is equal and uniform across the layer. Many polishes also include oils which add to the shiny appearance. 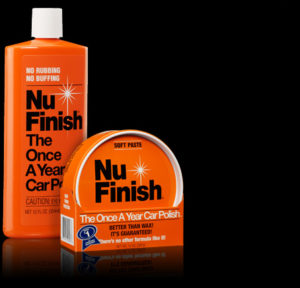 Reed Union Corporation has been producing Nu Finish for about 40 years now, it started out as an attempt to replace carnauba wax with a durable polish but quickly became one of their flagship products. Technically speaking, Nu finish utilizes amino functional chemicals and zinc cross-linking technology, in layman’s terms this means Nu Finish is silicone based to some degree and the zinc cross linking is how it maintains its shine while carnauba based waxes break down.

Nu Finish claims to the only car polish capable of keeping your car looking great for an entire year. This polish contains absolutely no wax and is 100% synthetic. Nu Finish is the most popular polish and can be found at most retail car care locations for around $8, making it one of the more cost friendly polishing solutions.

Nu Finish can be found in both liquid and paste versions, both are equally effective there’s little to suggest an inherent superiority of one over the other outside of personal preference. The paste is preferential for those looking for a traditional waxing experience, although it does take more time. Also the application of these two varieties differs.

Nu Finish is easily accessible in that a buffing machine is not required to apply the polish, all they ask is that you reapply after 30 days of the initial application.

You can also use Nu Finish to protect your fiberglass boat, airplane, or motorcycle, along with many other household items. Each standard sized bottle has enough polish to cover 3 smaller cars or 2 large cars. 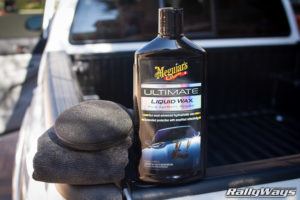 Meguiar’s is a synthetic polymer based wax that uses their patented “Thin Film” technology for easy application and removal in cloudy and sunny conditions. Meguiar’s is a hydrophobic wax that can be applied via dual action polisher or by hand. At an MSRP of $24.99 for a 16 oz bottle is slightly more expensive than the Nu Finish polish.

It is recommended to start off with Meguiar’s Smooth Surface Clay Kit before applying the Ultimate Wax Liquid. This is done to ensure any dirt is properly done away with. Next apply the wax using a soft foam applicator. Finally, buff with a microfiber cloth.

Meguiar’s gives a great mirror like shine that lasts around 5-6 months at time, but its appearance resembles more of a clear coat than a wax. Your car will look shiny but the colors won’t be as developed and lively as they would be if you used carnauba. I highly recommend not using your hands to apply this wax as it will quickly saturate your towels and lead to swirls all over your paint job. Using an applicator will lead to great results at a much quicker and less labor intensive rate.

At $5 to $10 Turtle Wax is a very affordable waxing option. The noticeably green gel is quite thick and resembles more of a paste than a wax, it’s virtually odorless and the application and removal process is relatively easy and user friendly.

Unlike Meguiar’s, Turtle Wax cannot be applied in direct sunlight, you have to first make sure your car is clean and cool to the touch. A small amount of wax is to be applied to a damp foam applicator, which is provided with the wax, or a cloth and spread section by section. Once this step is completed the wax is allowed to dry to a haze then it should be buffed gently with a microfiber cloth.

Turtle Wax takes quite a bit of drying time so not ideal for fast paced work environments but better suited to spare weekends spent in the garage. However, once it’s dry you have to buff it off immediately or else you’re going to spend a lot of time trying to get it off. The best way to avoid this is to wax sections at a time rather than waxing the whole car and then going back to buff it off. This will take a little more time in the short run but in the long run it could potentially save you hours. Like Nu Finish, Turtle Wax claims to last up to 12 months. 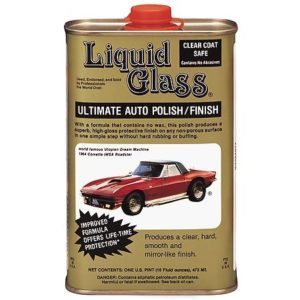 The first thing you will notice about Liquid Glass is its high viscosity, it’s about as runny as water. This is annoying at first if you’re used to much thicker waxes and polishes, making for frustrating application and quite a bit of waste until you get used to it.

Also, it smells pretty bad. Smell isn’t something I’d put at the top of my priority list when it comes to choosing a polish or wax but when you’re spending close to an hour inches from the stuff smell does matter to some degree.

Still, don’t let the smell deter you, Liquid glass is truly an all-around great polish. It goes on easy and it never has to be removed.. Also, it can be used in the sun, in fact, Liquid Glass actually bonds to the surface better when the car has been left in the sun for a little while. At around $20 it competes with premium products at an affordable price.

Don’t mistake Liquid Glass for what is isn’t though, it is much more of a finish than a polish and it is certainly far from a wax. You will still need to wax your car afterwards. 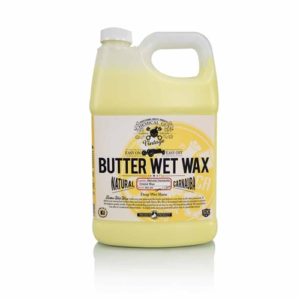 Now this is our only true 100% carnauba based wax that will give you that deep wet metallic look of a wax. Don’t expect it to last as long as the synthetic stuff but it does offer improved UVA and UVB protection.

This newer generation of carnauba based waxes is an improvement to Chemical Guys’ older stuff, it lasts longer, is more durable, and provides a better finish. Chemical Guys Butter is easy to put on and easy to remove, for car owners who prefer the traditional waxing experience Chemical Guys is the way to go.

One of my favorite aspects is just how little is needed to wax a car. One 16oz bottle which retails for just around $20 can last you 20-30 cars depending on their size, although you will be polishing them more often you won’t have to frequently go back to the store to spend more money. Chemical Guys Butter can be applied in the sun and it also smells great!