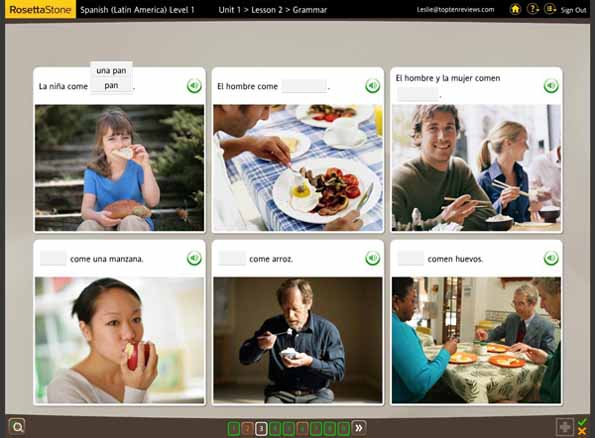 Rosetta Stone and Duolingo are two of the forefront leading programs in teaching users new languages. Rosetta Stone is a more software-based approach (made by a company with the same name, Rosetta Stone Inc), while Duolingo is a web-based solution, with a complementary application to help users keep brushing up on their language. Rosetta stone is more based off a stimulus of the language you are trying to learn, so it will use images, text and sound to help a user learn words and grammar, and uses its own trademark approach trademarked “Dynamic Immersion.” Duolingo has its users learn a foreign language while translating phrases from documents, which start from simple, short common phrases and work their way up to larger, more intense phrases. 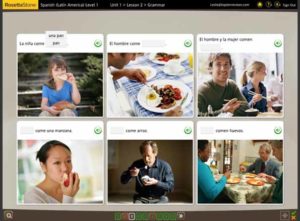 Rosetta Stone is an older product, having existed since 1992 – however, the system evidently worked quite well in order for it to have stayed around for more than 23 years. Rosetta Stone focuses equally on grammar and learning words and introducing grammatical mood, while Duolingo focuses more on learning phrases and dissecting them into parts with meaning. Rosetta Stone uses images and sounds (and combining the two for short videos now and then) combined with text to score its users. Rosetta Stone will immediately inform the user whether his or her input is right or wrong, with additional options to allow for customization; a user can decide if he or she wants a sound to occur when they put in the wrong answer, the user can decide if the program will wait until they are entirely done with their input, and the user can decide the difficulty of the initial challenge (say, for people who may have taken a few classes in a language and know some.)

Rosetta Stone has been around for more than 20 years now, yet offers 28 languages. These languages include most of the larger populations of peoples, with languages like Arabic, Mandarin Chinese (not traditional, though), Hindi, Greek, Dari, and includes American English and British English for non-English speakers. Rosetta Stone does have a very strong advantage over its competitors, Duolingo included, due to the images included with the package – the stimulus and exposure is to help a student identify a word with its actual meaning. Rosetta Stone primarily uses repetition in combination with exposure in order to help its users learn a language.

Rosetta Stone is available in several different packages. The program is offered in a DVD set, an online subscription (with lengths ranging from 6 months to 3 years, with more discounts for longer subscriptions), and even offers an online free trial. Prices start from around $75 for DVDS, and range upwards to $400 for the 3-year subscription. Subscriptions also include access to a mobile application. 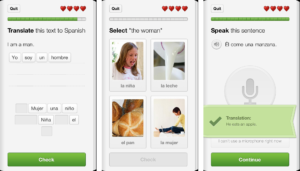 Duolingo is a website which, much like Rosetta Stone and many other language learning programs, offers to teach its users a new language. Rather than go through drills and repetition, though, Duolingo is more based over voice than using text through communication. There exists a logical “tree” of skills and talents, which are like building blocks and allows a user to apply previously learned knowledge to the current lesson. Users primarily answer multiple-choice questions either by speaking out loud or selecting an answer, speak translations into a device’s microphone, and repeat short common phrases. Also included in Duolingo is a way to track a users’ progress, including short rewarding games and

Duolingo promises a new way of learning, primarily through using this “building block” system. More importantly, however, Duolingo is completely free; a user can master an entire language without having to pay a cent. Duolingo makes its money through crowdsourcing, which also creates online-specific jobs; fluent users can translate phrases for Duolingo, or companies partnered with Duolingo, and make a little bit of extra money while honing their own skills. Duolingo is available as both an application and accessed by an internet browser. 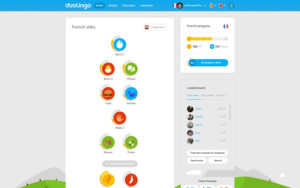 I took 3 years of French in high school, but that was as a freshman to a junior – fast forward 5 years later and I barely remember any phrases of it. Let alone the conjugation of the verbs, the sex of a noun (masculine/feminine), or how I should actually set up my sentence (what goes where in the actual structure of the sentence itself.)

I was immediately impressed with the ease of the introduction to Duolingo; it has a user start with simple tasks, and if he or she can show total mastery over the beginning lessons, then they can actually skip ahead a few lessons. I was not one of those people. I spent maybe 20 minutes to a half hour brushing up on my french, and it felt more like an engaging activity than classroom learning – I think I leveled up. One neat thing about Duolingo is it keeps track of activity on your account, using an “experience” system similar to a video game – as the user gets better and does more with Duolingo, they get more rewards and level up more. That’s something neat to brag about your friends with, who has the higher level in Duolingo?

I gave Rosetta Stone’s free trial a go, and almost immediately I was turned off by the experience. Rosetta Stone is overly reminiscent of classroom learning for me, and resembles BlackBoard or any other online system a college might use to assign work and track progress of a student. It was primarily retyping and translating phrases, usually accompanied with a picture. The presentation of Rosetta Stone is very pretty and clean, but ultimately, if you’re tired of learning in a classroom-type setting, then Rosetta Stone is probably not for you.

I definitely feel like Duolingo poses a very real threat to Rosetta Stone. I still have the application on my phone, and I think I should make myself use it more and more – Duolingo just feels more like natural learning, like a specialized lesson plan created by a professor only for you. I think Duolingo beats out Rosetta Stone as the best language learning program, not only because of its lesson planning, but also because of the fact it’s free. And hey, when money is so tight, why not take anything free that you can get, especially if it’s such a powerful tool that it can teach you a new language?