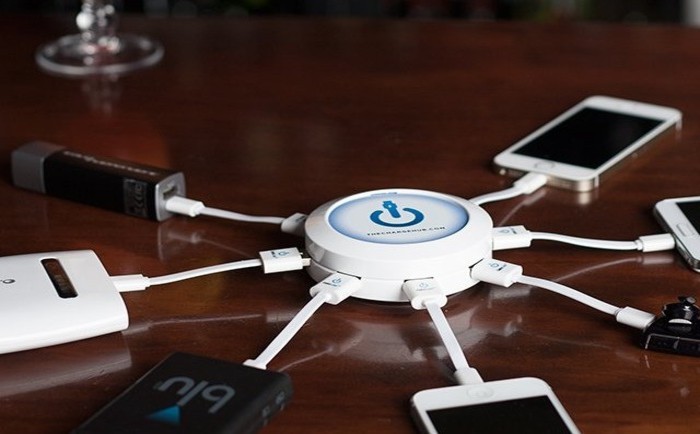 One of the most common struggles among people today is keeping all of their different devices fully charged. It’s all too common for someone to charge their phone overnight, and find that their battery is almost dead before the day is over. Some people opt to use different applications to maximize battery use. Some people use their device differently to maximize battery use. Obviously, the most obvious way to alleviate this issue is by charging your devices over the course of the day. However, not everyone has easy access to a power outlet. Especially in a workplace, people will often find that their power outlets are used up by other things. If you’re like me, this lack of outlets can also become a problem in the home. I personally have a corner in my house that’s dedicated to charging devices, and it’s a chore to cycle all of my devices through two outlets. The ChargeHub is a gadget that looks to solve this problem.

There’s a possibility that this sort of issue may not be relevant to you, or that you’ve already come up with a solution to offer. Off the top of my head, there are definitely solutions that already exist. If you really wanted, you could plug a power strip into your wall and use it as a designated charging zone. However, there are a few issues with that. To begin with, most power strips are bulky and ugly. They just don’t look good sitting out on your kitchen counter. Not only that, but with a power strip, you still need multiple power adapters themselves. You can’t plug a USB directly into a power strip. The ChargeHub is a round, 7 port USB charging station, and it is arguably one of the best charging hubs that money can buy right now. In this article, I’ll talk about some of the hub’s features, and I’ll tell you about why I think it’s worth your attention. 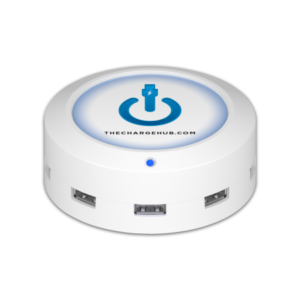 Taking a look at the ChargeHub’s list of features, you can quickly see that this neat piece of tech covers all of the bases. The basis of this product is fairly simple. You plug the hub into a wall, and you’re then able to connect up to 7 devices up to the hub through a USB connection. This allows you to make use of a single power outlet to charge multiple devices, without having to use multiple power adapters. Whenever power is being distributed through multiple channels, safety tends to be a concern. The last thing that anyone wants is for a power surge to kill their devices, or for them to have a burning hot hockey puck sitting on their counter. The ChargeHub has been certified and tested, and it is proven to be perfectly safe, so long as you only use it as intended. With its simple use, simple design, and safety features, this product offers everything that you would want out of a charging station. 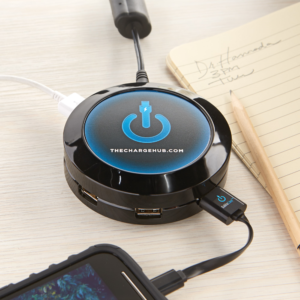 However, it goes even further than that. Remember when I talked about how ugly it looks to have a power strip sitting on top of a table? The ChargeHub’s basic design looks pretty good, but there are some other measures offered to improve the overall aesthetic of the device. To begin with, the device comes in a variety of different colors, which means that it should be able to fit in with whatever interior decorating set-up you may have. On top of that, one of the ChargeHub’s most novel features is its LED underglow. Aside from looking really cool, this light makes it to where you can more conveniently charge your devices with the hub under the cover of darkness. (No more fumbling with your iPhone charger on the way to bed!) You can also access the product’s free online DesignStudio to personally create your own decal to stick to the top of your hub. The design printed on the hub is already pretty tasteful in my opinion, but this makes it to where you can really customize the device as you see fit.

How well does it actually work?

When it comes to devices like this, it’s easy to be impressed by a list of features. How well does the ChargeHub actually function in practice? To cut directly to the chase: it works really well. The device functions exactly as you would expect it to function, and some customers have even reported that the hardy 48 watt power supply charges devices faster than the traditional wall charger. You shouldn’t really expect any bad surprises with this product. The only real criticisms that buyers have is that the wire connecting the hub to its power adapter is prone to fraying over time, which obviously does not speak well to the average life span of the ChargeHub. However, this issue doesn’t seem to occur with every unit, and the warranty that is included with the product should put you at ease a little bit. If you happen to run into any unfortunate glitches with it for whatever reason, the excellent customer service department behind ChargeHub will help you sort out your situation.

All in all, the tech world is really happy with what it has seen of this device. Whether you’re a frequent traveler or a homemaker, the ChargeHub is well-known for making life a little easier for you. (I only really talked about iPads and smartphones in the like in this review, but the hub is also capable of charging things like gaming console controllers, headphones, GPS’s, and much, much more.) In fact, the device has actually received significant attention in the press for its quality, too. The charging hub was first released in 2014, when it was showcased at the famous Consumer Electronics Show. Following its excellent showing there, the ChargeHub was actually honored with iPhone Life Magazine’s Best of CES 2014 award. It’s an innovative product, and critics and consumers alike have a lot of good things to say about it. If you’re worried about running into any issue with this device in practice, I have to tell you that your concerns may not be very well-founded.

For a lot of people, $60 is a steep price to pay to charge your phone. After all, you can buy phone chargers from any convenience store for a few dollars, most of the time. I can see where you’re coming from, but it’s important to note that with the ChargeHub, you’re paying for something that you can’t get out of just any charger. The functionality, portability, design, and safety of this product makes it the perfect thing for anyone who owns multiple devices that need charging. It can really be made useful in almost any environment, whether that be a standard household, a workplace, a school, or even a college dorm room. In this day and age, pretty much everyone owns at least one or two different “devices” of some kind. I highly recommend the ChargeHub to anyone who may ever encounter any difficulty in charging them.